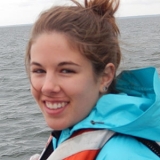 Coral Sr/Ca is often used to reconstruct past ocean temperatures in order to extend our knowledge of climate variability beyond the scope of instrumental records. Two sub-fossil corals with overlapping time record that grew in different reef settings on the island of Anegada, British Virgin Islands were used to test the replicability of a coral Sr/Ca record from different reef zones. Coral Sr/Ca was measured from coeval sections of core using ICP-OES and the geochemistry data were compared. Seasonal cycles of Sr/Ca in the corals were nearly identical, but the data differed in mean Sr/Ca. High levels of interannual variability in one of the corals contributed to low correlation between the two Sr/Ca records, likely as a result of the different environmental conditions in which the corals grew. Diagenesis is unlikely to have played a role in differing Sr/Ca data based on lack of evidence of diagenesis in observations of the surface of the corals and the coral x-radiographs. Data from this study suggests seasonal patterns of SST are the most robust feature of Sr/Ca-based SST records in Anegada from the two corals.