As most Marylanders who live near the Chesapeake Bay know, storm surges aren’t just a future problem. Flooding is already a risk in communities around the state.

As sea level rises, flooding due to storms will worsen so that homes and buildings already vulnerable to storm surges will sustain more damage. Powerful storms can damage dwellings or flood low-lying areas with high tides and wind-driven waves. Some Maryland neighborhoods could be underwater completely. 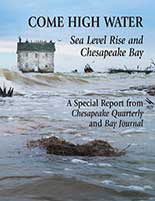 A special report, Come High Water: Sea Level Rise and Chesapeake Bay, offers a comprehensive look at the causes and consequences of increasing flooding along Maryland’s coasts. This package, produced by Maryland Sea Grant's magazine Chesapeake Quarterly in partnership with Bay Journal, examines the scientific understanding and projections of the rate of sea level rise in the Chesapeake region; effects on people and the environment; and adaptations and policy responses that are under way or under consideration. An online interactive page offers videos, photos, and an interactive map showing flooding that is predicted to occur.

These articles, all by Michael Fincham, examine storm surges in particular:

The Perfect Surge: Blowing Baltimore Away

The Storm Over Surges: When Sandy Came to Crisfield

A Flood Wall Against the Future: If Katrina Came to Washington

Fincham also wrote an article in a different issue of Chesapeake Quarterly about how climate change could make hurricanes and resulting coastal damage worse:

Going to Extremes: The Storm Over Hurricanes

The serious effects of big storms were on full display in the Chesapeake region in 2003 when Hurricane Isabel blew through. To turn that storm into an opportunity for learning, Maryland Sea Grant designed a series of outdoor panels about the flooding caused by Isabel in different parts of the state. Each panel includes eyewitness accounts and scientific information on the power of flooding: