The Chesapeake Bay was once home to vast numbers of oysters — oyster reefs rose so high that they grazed the bottoms of boats sailing the Bay. A nationwide trade in oysters grew up with the Bay at its heart.

These native oysters — the Eastern oyster (or Crassostrea virginica) — also played a key ecological role in the Chesapeake. They filtered algae and provided habitat and shelter for other animals and underwater plants.

Today, the Bay’s oyster population stands at a difficult crossroads. Decades of overharvesting and diseases such as Dermo and MSX have left the Chesapeake’s iconic oysters in a precarious state, at only about one percent of the numbers present in the nineteen century.

Scientists and policy makers are exploring ways to restore oysters to the Bay. Reef building, establishing protected sanctuaries, and breeding disease-resistant oysters may all be key to fostering a comeback of Crassostrea virginica. The oyster will need all the help it can get.

Maryland Sea Grant has supported a variety of research, education, and public-outreach projects related to this famous shellfish of the Chesapeake Bay.

Learn about the work of Maryland Sea Grant Extension: Our agents and specialists work to support oyster aquaculture and restoration. We grow oyster seed for oyster farming and for projects to restore reefs of wild oysters in the Bay. We also provide technical advice about aquaculture methods, business financing, and public policy.

Check out this sampling of our diverse information resources about oysters, including publications, articles, and videos.

Browse and search Maryland Sea Grant’s Bookstore for additional reprints and other materials.

Many additional articles about the science and history of oysters in the Chesapeake Bay have appeared in Maryland Marine Notes and Maryland Aquafarmer, both formerly published by Maryland Sea Grant. Browse these publications’ archives or search our site to find these articles.

Check out our YouTube channel to see more videos about oyster research and restoration and about oystering and the watermen who harvest the bivalves on the Chesapeake Bay. 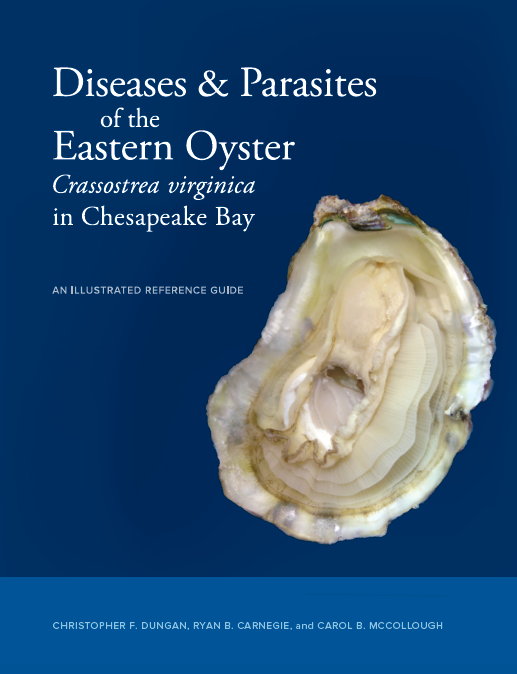 Christopher F. Dungan, Ryan B. Carnegie, and Carol B. McCollough

This is a comprehensive, color-illustrated guide to histological presentations of diseases, pathogens, and parasites of eastern oysters, Crassostrea virginica.