The threat of lightning is easy to ignore on an overcast summer day, but it can kill unprepared boaters without warning. Carrying as much as 100 million volts, it can smash a hole through a hull, explode a mast, and electrocute several people in a single flash. The thunderstorms of the Chesapeake Bay pose a lightning threat every boater should know about.

Lightning is nature’s way of equalizing conflicting charges in the atmosphere. These charged form most often when cool and warm air masses collide.

How Dangerous is Lightning?

In the United States, lightning consistently kills more than 100 people per year. That’s more than other natural disasters, such as hurricanes, floods, or tornadoes. Risks are especially high for those who spend time outdoors, including farmers, fishermen, or boaters.

Water and lightning are a natural combination. Water conducts electricity very well, and when you add in the high profile of a boat surrounded by open water, there is an increased danger of getting electrocuted during a storm.

Take steps to stay safe. Here are tips from Maryland Sea Grant and University of Maryland Extension. Click on each heading to learn more.

What Can You Do?

To protect yourself in a boat, the important thing is to give lightning a ground. Boats made of steel, such as naval vessels, have an automatic ground in their metal hulls; but most small boats, usually constructed of fiberglass or wood, prevent the lightning easy access to the water and pose a grounding problem. Small boats may also lack tall objects that could deflect lightning. And even boats that do have tall spars -- like sailboats -- can run into problems if their spars are not properly grounded. The following grounding system will minimize the risk of lightning damage: 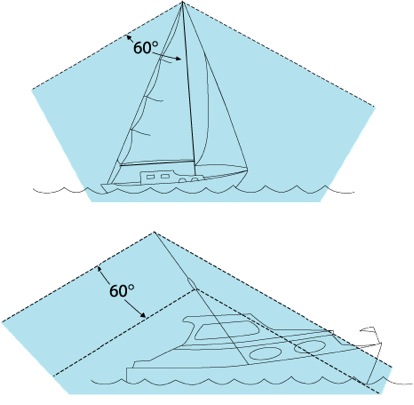 After a shipboard lightning strike, check to see that everyone is all right -- it is, of course, perfectly safe to handle someone who has been hit by lightning. Check for burns, which should receive normal first aid treatment. (Don't put ointment on severe burns; cover them with clean cloth or plastic to keep out air.)

If someone has been knocked unconscious, act immediately: check for breathing and heartbeat.

If you feel a pulse, but no breathing, begin mouth-to-mouth resuscitation (a handkerchief over the mouth will help the squeamish). If there is no heartbeat, begin cardiopulmonary resuscitation, a technique every serious boater should know.

Grounding your boat and unplugging radios and electrical equipment during a storm are good ideas, but the best precaution against lightning is avoidance. Especially in small craft, keep a weather eye out for the coppery haze and building cumulonimbus clouds that signal thunderstorms, heading ashore well ahead of the turbulence.

Remember that lightning can lash out for miles in front of a storm, and it can strike after a storm has seemingly passed. Remember, too, that, storms can bring high winds and waves, making a last-minute trip to shore a dangerous dash. The best maneuver of all is to think ahead.

Download a pdf of our brochure, Lightning: Grounding Your Boat, containing this information.