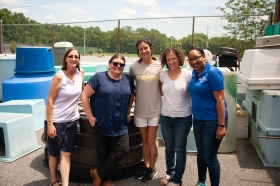 Glen Hedelson stood in front of two dozen educators, all of them staring at bits and pieces of a micro-computing system at their lab tables, and asked a simple question: “Are you ready to build?”

Marine educators from all over the continental United States and Puerto Rico were more than ready. Many had been pushing for decades in their own states for the kind of hands-on aquaculture science program like the one they were seeing in rural Carroll County, Maryland. They had come to watch it in action and to put themselves through the paces their students would experience when it came time for them to build something new and unfamiliar. In this case, the educators were learning to build a microcomputer-driven water quality monitoring system for aquaculture — an activity created to introduce students to engineering and software design.

The session was part of the first Sea Grant Aquaculture Education Network Summit in Maryland. It stemmed from the Aquaculture in Action program that Maryland Sea Grant Assistant Director for Education J. Adam Frederick runs with University of Maryland Extension Specialist Jackie Takacs. The summit included 12 Sea Grant educators, six Maryland teachers, and one recent alumna of NOAA’s Teacher at Sea program who teaches at a private school in Washington, D.C. They came together thanks to funding and support from the National Marine Sanctuaries Foundation and NOAA Office of Education.

One of the best models of project-based learning nationally is in a county about an hour from Baltimore and Washington, D.C., nestled in cornfields with mostly two-lane roads connecting its seven high schools. And yet, every one of those schools is home to aquaponics — integrated systems that combine aquaculture, the raising of fish, with hydroponics, the growing of plants without soil. These systems encourage hands-on science: engineering to build the system, biology to feed the fish and grow the plants, and chemistry to analyze the water and the effectiveness of the filtration systems to ensure optimal animal and plant health.

“This is a model for what you can do. That doesn’t mean it’s going to work exactly like this where you are,” Frederick said as he gestured toward the large lab space and busy tanks in Judy Plaskowitz’s South Carroll High School classroom. “What we’re saying is, let’s do things we can do. Let’s build models we can share.”

Jim Peters, supervisor of science for the Carroll County Secondary Science program in the county’s public schools, said the system’s success hinges on several factors: committed teachers, partners in the private sector and the scientific community, and a curriculum mandate to educate the 25,000 middle and high school students with hands-on science. (Some middle schools also have the systems.) Peters, who has been in the county for 40 years, helped build the program with former Supervisor of Science Brad Yohe, and has run it for the past 15 years.

The South Carroll High School program has received funding and in-kind support from many national, regional, and local partners. The Maryland Department of Natural Resources, Maryland Sea Grant, University of Maryland Extension, and the Institute of Marine and Environmental Technology (IMET) in downtown Baltimore are also partners in the effort. IMET, in particular, has donated scientific expertise and equipment they are no longer using in their own Aquaculture Research Center. The partnerships help it along, Peters said, explaining that having Aquaculture in Action as part of the school’s Program of Studies and an infrastructure to support it is the foundation of success.

“You have to have someone in my position, district-wide, to push for this — to have the conversation with the principals,” Peters said. “You need a building-level administrator or a district administrator that will support it. Without that support, it will go away.”

Emma Wiermaa agreed. As the aquaculture outreach specialist for Wisconsin Sea Grant at Stevens Point, Wiermaa has access to an aquaculture demonstration facility for research, a school system with an interest in teaching science, teachers eager to begin lessons, and systems in many classrooms. She even partners with a growing aquaponics company — Superior Fresh — that is eager to hire graduates to work in the industry.

“The only limiting factor is getting a curriculum going,” she said. “And this is farming, right? It makes sense to incorporate it in the classroom, but I just wish we had a curriculum to provide the teachers.”

Wiermaa attended the week-long workshop in hopes of helping to build one. She is already familiar with the work at IMET and said the Stevens Point Northern Aquaculture Demonstration Facility could help fulfill the same role for Wisconsin students that the Sea Grant-IMET collaboration does for Carroll County students. 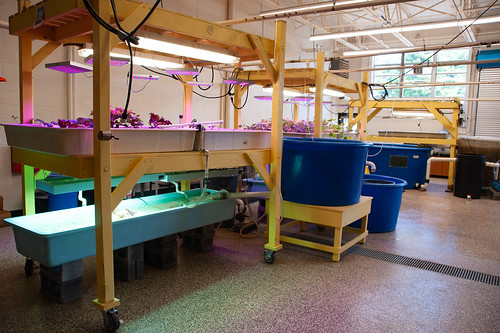 The group toured IMET’s Aquaculture Research Center and heard how researchers are breaking down fish waste and turning it into energy. They also learned how Sea Grant, IMET, and NOAA are working together to encourage sustainable aquaculture and support science education.

The educators agree that being able to quantify how many students choose careers in science because of their exposure to hands-on opportunities like Aquaculture in Action is one of their goals. Peters said he doesn’t have numbers, but believes such opportunities have meaningful impact. Chris Flight, marine education specialist with the Mississippi-Alabama Sea Grant Consortium, agreed. He leads students to the waters outside his Dauphin Island Sea Lab and sees the change in their faces when they get to experience the salt marsh and do their own experiments.

“I’ve already seen six or seven students who have come here for field trips get internships, and I’ve only been here three years,” he said. “We know we are having an impact on the students. We are having a hard time saying whether it’s 20 percent, or 50 percent, or another number.”

After tours of IMET, as well South Carroll and Manchester Valley High Schools, the week ended with discussions of possible future collaborations. Sea Grant educators populated the Aquaculture in Action online map with their institutional information and are hoping to fill the rest of their maps with pins of participating schools.

Participants are hoping the same for the pieces of Aquaculture in Action — that the schools, the research arms, and the federal and state partners can come together and tweak the Carroll model for use in their communities.

“I’ve gotten to know so many other people here, trying to do this,” Wiermaa said of experiencing the Carroll model through the summit. “Even the teachers tell us, ‘learning out of the book is so old-school now.’ ”

Photo, top left: Marine educators pose in front of tanks used to construct aquaculture systems. They are some of the two dozen attendees to the 2019 Sea Grant Aquaculture Education Network Summit in Maryland. Credit, Nicole Lehming/MDSG