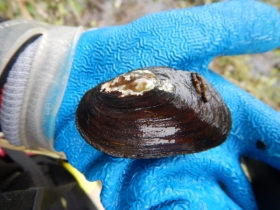 Native mussels are beginning to earn their 15 minutes of clean-water fame as in a variety of restoration projects on Chesapeake Bay. For one mussel in particular—the common Eastern elliptio mussel (Elliptio complanata)—the American eel plays a key role.

Almost all freshwater mussels native to North American must attach to a fish host to complete their metamorphosis from larvae into juveniles. In the first Mid-Atlantic study of its kind published in 2013, scientists learned that elliptio mussel larvae successfully metamorphosed on only five species of 38 fish and two amphibians that could potentially serve as hosts. And, among those five successful host species, eels achieved the greatest rate of mussel metamorphosis. The research, conducted between 1999 and 2008, studied mussels and host fish primarily collected in the Susquehanna, Chester, and Choptank rivers.

So, what happens when there aren’t as many eels—for instance in rivers like the Susquehanna where, since the construction of the Conowingo Dam in 1928, eel migration to 400 miles of the river’s watershed dramatically declined? To assess the juvenile population of elliptio mussels in tributaries above the Conowingo and other dams on the river and learn whether stocking eels would translate into more mussels, researchers from the U.S. Fish and Wildlife Service (USFWS) and U.S. Geological Survey (USGS) undertook a multiyear project to introduce eels into a few Susquehanna tributaries and study the result.

To assess juvenile mussels above the dams, in 2008 through 2010 researchers surveyed elliptio populations at 16 sites, among them Buffalo and Pine creeks in central Pennsylvania. They found only two juveniles but estimated mussel populations in a single 200-meter stretch to be 30,462 in Buffalo Creek and 59,296 in Pine Creek. These were predominately older, larger mussels that likely were vestiges from the Pennsylvania Fish and Boat Commission’s eel stocking efforts from the 1930s to the 70s. The commission’s last stocking took place in 1980.

From 2010 through 2013, using eels collected at the Conowingo Dam and a creek near Ocean City, Maryland, the researchers stocked a total of 118,742 eels in Buffalo Creek and 122,049 in Pine Creek. In 2014 and 2019, they returned to see if the juvenile mussel population had changed.

In Pine Creek, though, the story was different. In 2008, researchers found no juvenile Eastern elliptio, but in 2014 they found 151, comprising 21 percent of the mussels collected. In 2019 those numbers dropped to 99, or 10 percent of the survey (potentially due to 2018 being the rainiest summer on record). The estimated population in Creek’s surveyed stretch, however, jumped from 60,000 in 2008 to 100,000 by 2019. And, while juvenile numbers were down from 2014, researchers in 2019 found mussels in a new size class between 50 to 70 mm, indicating a more diverse age and size structure in the population than previously.

Researchers believe water quality and habitat are factors in the divergent results in the two creeks. For example, Pine Creek’s forest cover upstream of the stocking sites is 89 percent, versus 58 percent for Buffalo Creek, where agriculture is prevalent. Buffalo also has been included on the Environmental Protection Agency’s list of impaired waterways.

This is Part 4 of a series. Learn more: