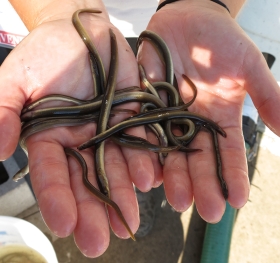 Some 20 miles upstream from Baltimore on the Patapsco River, a four-inch-long American eel is making a monumental climb. Wriggling up a steep 30-foot-long metal gutter lined with a climbing substrate, the eel finally gains the summit, then slides down the other side into a mesh bag in a holding tank.

Here, William Harbold, a biologist with the Maryland Department of Natural Resources (DNR) Maryland Biological Stream Survey, collects it and any others that have navigated the DNR’s eel ladder at Daniels Dam. He will release the eels upstream where they can find new habitat and hopefully mature into silver eels in 10 to 20 years before migrating back downstream, traveling thousands of miles to the Sargasso Sea to spawn.

In 2019, Harbold helped 53 eels past Daniels Dam—not a lot, but a jump from between 32 and 36 eels in each of the three previous years—and potentially significant because Bloede Dam, a major barrier about 10 miles below Daniels, was removed in 2018.

Daniels Dam is the last of four dams on the Patapsco that have blocked the passage of American eels and other fish for over a hundred years. Built around the turn of the 20th century to provide hydroelectric power, the dams had long outlived their purpose, but removing them has been a complicated, expensive process. A collaborative, years-long effort by American Rivers, the U.S. Fish and Wildlife Service (USFWS), DNR and other state and federal agencies finally led to the removal of three dams downstream: Union Dam and Simkins Dam in 2010 and 2011, respectively, and Bloede Dam in 2018-19. With Bloede’s removal, some 180 miles of habitat was newly reopened to eels.

Loss of habitat due to damming of rivers has contributed to steep population declines of American eels. The Atlantic States Marine Fisheries Commission (ASMFC), charged with managing eel stocks on the East Coast, found in its 2017 stock assessment eels remain “depleted.”

According to the USFWS, only 12 percent of Mid-Atlantic waterways are available before eels reach a dam. Sheila Eyler of the USFWS and coordinator for the Susquehanna River Anadromous Fish Restoration Cooperative says more than half of eels’ historic freshwater habitat in the Mid-Atlantic is likely reduced or eliminated. The first item on the ASMFC 2017 report’s list of recommendations to improve eel habitat is to identify and prioritize historic habitat and help restore populations there by mitigating the effects of dams (including reducing eel mortality in dam turbines on their out-migration).

The Susquehanna River is one of those historically important habitats. As the Bay’s largest tributary, constituting 43 percent of the watershed, eels are stopped just 10 miles upstream at the Conowingo Dam, which was built in 1928. Between 2008 and 2017, the USFWS collected eels at the Conowingo and transported them for release upstream in specific locations. Since 2018, Exelon Corp, the dam’s owner, has been required to assume responsibility for eel collection and stocking as part of its Federal Energy Regulatory Commission license.

To help determine whether upstream stocking is effective, USFWS researchers have been monitoring eels’ growth rates and movements in stocked streams, among them Buffalo Creek, where 118,642 eels were stocked between 2010 and 2013. In a 2019 report on the Buffalo Creek monitoring, researchers describe how they inserted a type of identification tag called PIT tags—passive integrated transponders—into eels longer than 200 mm, so that they could recapture and monitor identified individuals annually to measure growth rates. Surveys close to the stocking site itself yielded 2,339 eels captured and 1,838 tagged.

Among their findings, researchers report that the stocked eels are surviving, growing, and staying close to the stocking site. Females grew significantly faster than males, and outnumbered them as well—although more males grew to mature silver eels (20 percent) than previous studies have typically assumed for freshwater tributaries.

Also, while researchers have assumed that eels in brackish estuaries and lower in watersheds grow faster than those in smaller freshwater tributaries, the Buffalo Creek surveys found higher growth rates for females and average growth rate for all eels was similar to rates that have been found in other Bay tributaries. This may be due to less competition for food, better food, or less predation; regardless, the results have implications for restocking management models going forward.

“There is a huge potential benefit to getting them upstream,” says Steve Minkkinen, project leader of the USFWS Maryland Fish and Wildlife Conservation Office and an author on the 2019 report. “But you have to get them downstream [past the dam’s turbines] to that see that benefit.”

USFWS biologists release an eel back into Buffalo Creek after measuring and recording it as part of a restocking survey on Buffalo Creek. Photo credit: Josh Newhard / USFWS

This is Part 3 of a series. Learn more: