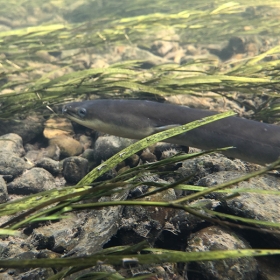 It’s spring in Maryland and in rivers and tributaries throughout the Chesapeake Bay, young American eels, called elvers, are moving upstream—pushing and wriggling and constantly moving. Movement is what they are made of.

These tiny eels, Anguilla rostrata, also known as freshwater eels, have traveled thousands of ocean miles and hundreds more up the Chesapeake Bay. As North America’s only catadromous fish—one that lives in freshwater and returns to saltwater to spawn—every American eel in the Chesapeake Bay was born in the Sargasso Sea, a two-million-square-mile expanse of ocean roughly between Bermuda, the Azores, and the West Indies.

Scientists know little about precisely how, where, or when this happens. “It’s just a big ocean out there,” says Steve Minkkinen, project leader of the Maryland Fish and Wildlife Conservation Office, part of the U.S. Fish and Wildlife Service (USFWS). “That kind of research is expensive and difficult.”

They do know that after the eggs hatch, the planktonic leaf-like larvae called leptocephali (lepto for leaf, cephalis for head) drift for about a year, riding currents that propel them toward the rivers and estuaries down which their parents—as sexually mature silver eels—dashed to make their terminal journey to the Sargasso Sea. As the larvae approach the Chesapeake, they’ve transformed into glass eels. As the name implies, they are still transparent, but are now two to three inches long with developed fins and the eel’s shape—and they are seeking freshwater any way they can, including sometimes moving short distances over land into ponds and lakes.

As they grow to about four inches long, they become darker elvers, continuing to migrate upstream into estuaries and rivers. Eventually they become sexually immature yellow eels. Those that spend their lives further upstream in freshwater seem to grow larger and older, while those that stay in brackish water tend to mature earlier. They can live as yellow eels up to about 20 years before reaching sexual maturity, when they become silver eels.

Researchers aren’t certain when eels become male or female, as there are many factors involved that they are still working to understand. However, it is possible for scientists to identify gonad development in eels late in their juvenile stage, when they are about 260 millimeters long.

“How and why they choose gender is still an unanswered question,” says Julie Devers, a fish biologist with the USFWS Maryland office. Most researchers believe environmental factors including salinity and temperature may determine gender. Lower population densities may also trigger more eels to become female.

When the time comes to migrate back to the Sargasso Sea and reproduce, males generally are about 400 mm (just over a foot long) while females can be three times that. To travel thousands of miles seaward, their bodies undergo dramatic changes—their guts degenerate as they stop eating, blood vessels supporting their swim bladders increase, and their eyes double in size and become more sensitive to blue, improving their vision in dark water.

Unlike other Chesapeake species, eels have never been successfully bred in captivity, and much of their lives remains a mystery. Eleven “habitat research needs” listed by the Atlantic States Marine Fisheries Commission (ASMFC) reveal the breadth of what we don’t know, including identifying silver eels’ migratory routes and mechanisms, verifying spawning locations, researching behavior and movements when eels are living their lives in freshwater, and understanding how changes in ocean climate and environmental quality might affect larvae as well as adult migration and spawning.

This is Part 1 of a series. Learn more:

Photo, top left: An American eel swims in Buffalo Creek off the Susquehanna River after being tagged as part of a growth monitoring study. Photo credit: Josh Newhard / USFWS