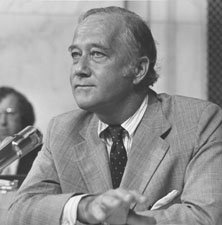 Maryland Sea Grant proposed creating the Mathias Medal award because we realized that scientists who seek to use research findings to inform practical policy issues often go without recognition — and in some cases, they are actually criticized by their colleagues for doing so. The tradition and norms of science tend to place a higher premium on creating new knowledge through scholarship than on applying that research through public policy.

Instituted in 1989, the Mathias Medal is named after U.S. Senator Charles “Mac” Mathias of Maryland. Senator Mathias was instrumental in helping to launch regionwide efforts to restore the Chesapeake Bay. He was known for working to use science to serve the public good and for reaching out frequently to seek the input of scientists. The medal displays Senator Mathias’ profile.

Seven scientists have received the medal:

2011 — Eugene M. Burreson, who pioneered studies of parasites that decimated oysters in the Chesapeake Bay.

2004 — Grace Brush for her studies that used the presence of plant pollen, microscopic organisms, and other substances in Bay sediments to track changes in the estuary and its watershed.

1997 — William Hargis Jr. for his work to promote the study of marine sciences in Virginia.

1996 — Clifford W. Randall for his work in biological nutrient reduction methodologies for the Chesapeake Bay watershed.

1990 — Donald W. Pritchard for his work in describing estuarine dynamics. 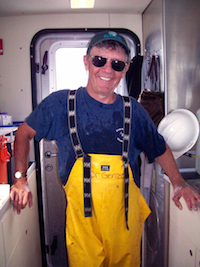 Boynton’s foundational research has offered new insights into how the Bay’s ecosystem works — insights that initially drew controversy but are now broadly accepted. He coauthored one of the first scientific papers, still widely cited, that implicated excess nitrogen washing into the Chesapeake from farms, parking lots, and other human sources as a key driver of the eutrophication process, which has damaged the Bay and other estuarine ecosystems worldwide.

Findings by Boynton and his colleagues have formed a critical part of the foundation of scientific knowledge that continues to inform efforts to improve the Bay’s ecosystem. He worked persistently for years to persuade natural resource managers and policy makers to monitor nutrients in the estuary and to take bold actions to reduce nutrient loads.

Eventually leaders responded with a series of management plans now credited with lowering amounts of nutrients in parts of the Chesapeake’s vast watershed. Boynton helped to design the Chesapeake Bay Program’s monitoring effort, which began in 1984, is still operating, and is considered one of the best in the world. He published findings detailing how long-term management practices to reduce nutrients can lead directly to improvements in the Chesapeake Bay ecosystem, as measured by the higher abundance of seagrasses, clearer water, and smaller blooms of algae.

2011 — Eugene M. Burreson for pioneering studies of parasites that decimated oysters in the Chesapeake Bay. 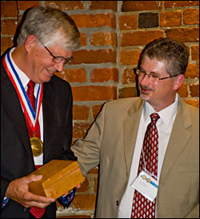 Burreson retired in 2010 from the Virginia Institute of Marine Science as a professor after 34 years.

In 2000, he and a colleague published a landmark work of scientific sleuthing that pinpointed for the first time the source of the protozoan parasite that causes MSX, a disease that helped reduce oyster stocks in the Chesapeake to one percent of historic levels. Burreson used genetic fingerprinting to show that the DNA of the MSX microbe found here matched that in parasites found in Japanese, or Pacific, oysters (C. gigas), which were imported to East Coast waters starting in the 1930s.

Burreson also played an instrumental role in the continuing effort to breed disease-resistant strains of the native oyster Crassostrea virginica. VIMS now provides them to shellfish growers throughout the mid-Atlantic. In addition, Burreson developed molecular tests that are used worldwide to detect shellfish pathogens and trained scientists to use them.

"Gene's contributions clearly rank with the very best in shellfish biology over the past century," said Roger L. Mann, director of research and advisory services at VIMS. 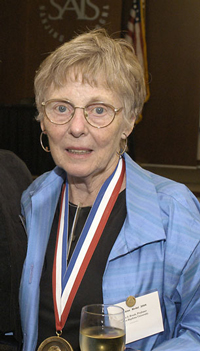 2004 — Grace Brush for her studies that used the presence of plant pollen, microscopic organisms, and other substances in Bay sediments to track changes in the estuary and its watershed.

Grace Brush, a scientist well known for her work on the pre-Colonial ecology of the Chesapeake Bay, received the prestigious Mathias Medal on May 6, 2004, at a ceremony in Washington, D.C.

Professor Brush earned her doctorate in biology from Harvard University, and began her career in 1949 working as a technician for the Geological Survey of Canada. Brush came to Johns Hopkins University in 1973 as a research scientist and from 1976 to 1978 also served as the administrator of the Maryland Department of Natural Resources Power Plant Research Program.

Brush pioneered studies that used the presence of plant pollen, microscopic organisms, and other substances in Bay sediments to track changes in the estuary and in the watershed that surrounds it. Her studies provided the basis for much of our early understanding of how and when the forests surrounding the Bay were first cleared. Her findings helped to explain how the resulting shifts in sediment loads and water chemistry changed the Bay and its ecosystem.

"When policymakers attempt to compare the Bay of the past with the Bay of the future," says former Maryland Sea Grant director Jonathan G. Kramer," they turn to the work of Grace Brush." Kramer calls her work "pivotal," because it has detailed the story of the Bay's response to human settlement and the impacts of land use changes.

Brush has been noted as a significantly influential scientist, both for Bay research and for pioneering the advance of women in science and engineering.

1997 — William Hargis Jr. for his work to promote the study of marine sciences in Virginia. 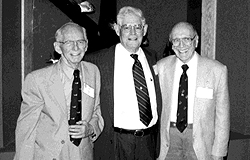 A life-long resident of the Chesapeake Bay area, William Hargis worked for nearly 40 years to promote the study of marine sciences in Virginia. He served as director of the Virginia Institute of Marine Science of the College of William and Mary for 22 years, during which he greatly increased student enrollment and personnel.

He changed the nature of VIMS from a fisheries science laboratory to a multidisciplinary program. He recruited scientists in the fields of chemistry, oceanography, engineering, environmental science, and microbiology-pathobiology.

He has also served on state, regional, national, and international boards; advisory councils; and task forces that established new policies, studies, and institutions to work with marine science. He worked frequently with the Chesapeake Biological Laboratory and the Chesapeake Bay Institute in Maryland.

While VIMS focused on lower Bay issues, CBL focused on the upper Bay and CBI on physical and chemical studies. The institutions pooled their efforts and resources to conduct Baywide research that addressed regional issues.

Hargis credited an emerging public interest in oceanography for some of his success. "It was a good time to be in the business," he said. "We at the VIMS made major contributions to the understanding of biological phenomena and the coastal environment. Most of my life I have spent around the Bay. It's been a great source of satisfaction to me to have worked so closely with the estuary that I love." 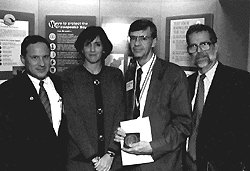 1996 — Clifford W. Randall for his work in biological nutrient reduction methodologies for the Chesapeake Bay watershed.

He served in the Commissioned Officer Corps of the U.S. Coast and Geodetic Survey from 1959 to 1962, with most of his service in the Chesapeake Bay region, particularly the lower Potomac River estuary. Randall joined the environmental engineering faculty of Virginia Tech in 1968.

At the request of the Virginia State Water Control Board, Randall established the Occoquan Watershed Monitoring Program in 1972. He led the Occoquan Laboratory as it pioneered suburban and urban nonpoint pollution research and control, watershed-wide water quality monitoring, computer modeling of reservoir water quality as a function of land use patterns, and evaluation of atmospheric pollution.

Randall introduced biological nutrient removal (BNR) wastewater treatment to the Chesapeake Bay area in 1984, and worked with the Hampton Roads Sanitation District from 1986 to 1990 to develop the public domain patented VIP process. He worked closely with the Maryland Department of the Environmental starting in 1987 to develop and implement BNR processes at municipal plants throughout Maryland, resulting in the modification and operation of more than 15 BNR plants in Maryland. 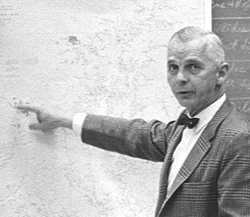 L. Eugene Cronin was a student of the Chesapeake Bay since 1940. A zoologist by education he spent most of his career in administration. He received his undergraduate degree from Western Maryland College and graduate degree from the University of Maryland.

His research and publications focused on the biology of blue crabs, fish, oysters, and zooplankton and on the problems of pollution, resource management, and the deterioration of the Chesapeake Bay. Cronin’s interests at the time he received the Mathias Medal were the problems of effective management of the blue crab and the preservation of important natural areas.

Dr. Cronin served on the Marine Board of the National Research Council, chaired the Environmental Advisory Board of the U. S. Army Corps of Engineers, and retired to work as a coastal consultant and lecturer.

In professional affairs, he was president of the National Shellfisheries Associations, Atlantic Estuarine Research Society, and the International Estuarine Research Federation. He received awards from a variety of sources, including the Isaac Walton League of America, the Oyster Institute of North America, Office of Naval Research, and the Army Corps of Engineers. He was also named an honorary "Admiral of the Chesapeake Bay." 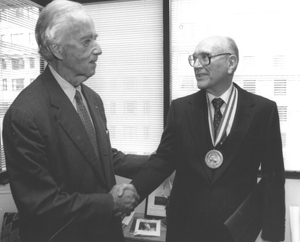 1990 — Donald W. Pritchard for his work in describing estuarine dynamics.

Donald W. Pritchard, an internationally acclaimed physical oceanographer, was the first Mathias Medal recipient. Because of his work dealing with the fundamental characteristics of the Chesapeake Bay during the early years of Bay research, Pritchard was seen as a highly deserving of the award by the selection committee.

Pritchard developed a classification scheme (now a textbook standard) for the water circulation processes of the Chesapeake as well as other estuarine systems. He served as director of the Johns Hopkins University's Chesapeake Bay Institute from 1949 to 1973 and as the senior research scientist there from 1973 until 1979. In those positions, he helped establish the scientific agenda and management policy for the Chesapeake.

He also served as a professor and dean at the Marine Science Research Center at the State University of New York at Stony Brook.

Originally trained as a meteorologist at the University of California at Los Angeles, Pritchard forecasted sea and swell conditions for amphibious landing operations in Normandy and the Pacific during World War II.

Among the many honors he received were the Honorary Doctor of Science Degree from the College of William and Mary in 1985 and the U.S. Environmental Protection Agency Region II Annual Environmental Award in 1987.