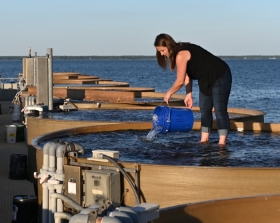 When Maryland revised its shellfish leasing laws in 2009 to enable commercial oyster farming in public waters, entrepreneurs who had pushed for the change for years rejoiced. Finally, obtaining a lease to grow oysters in Maryland waters was more accessible.

More than a decade later, many have done exactly that. But the path wasn’t easy. Among the many challenges to raising oysters was figuring out how, exactly, they grow. Different parts of the world use different gear to contain and grow oysters depending on wind, waves, tidal fluctuation, temperature, and local regulations. Finding the right gear for a particular farm could become a costly exercise in trial and error.

Enter Shannon Hood, a Kent Island native who grew up with an appreciation for the culture of working on the water and a love of the Chesapeake Bay. In 2015, she was working a desk job focused on the intersection of science and policy for the Environmental Defense Fund (EDF) in Washington, DC, when she reached out to Stephanie Alexander, who works in the oyster hatchery at the University of Maryland Center for Environmental Science Horn Point Laboratory. Hood had become enamored with oyster farming and was hungry to learn more; she was eager to get back outside, and in a way that used her marine science background.

“Although I loved my work and colleagues at EDF, it was a total culture shock,” Hood said of her time in the District. “I was trying to figure out how I could combine my love of the outdoors with my interest in biology. So, I decided I wanted to start an oyster farm, and I called around to ask about how I could go through the leasing process to get one.”

Alexander told Hood about a summertime program that provides hands-on experience, teaching interns how to raise oysters in a hatchery, set them on shells, and help them to grow.

Her boss in Washington held her job, just in case, but Hood never went back, although she remembers her time there fondly and calls upon skills learned at EDF regularly.

Five years later, Hood has an oyster farm of sorts—a demonstration facility at Horn Point that helps oyster farmers try out new gear and techniques and helps fill research gaps in hopes of growing the state’s oyster industry. Along with her own research, the UMCES Horn Point Laboratory Demonstration Oyster Farm serves as a living laboratory for collaborative oyster aquaculture research by other graduate students and universities.

Hood is a Maryland Sea Grant Extension specialist, part of a team that helps oyster farmers run their operations more effectively. It’s helpful to have a demonstration farm, Hood said, so farmers don’t have to absorb that risk themselves and lose money. A recent expansion of the footprint of the demonstration farm means space for additional researchers to tackle new challenges. The industry faces a diverse array of challenges, and the aquaculture research team is eager to facilitate strong research projects that have meaningful impacts to the industry.

Hood has just put out a report, “Oyster Production Equipment Comparisons, 2016-2018.” The report compares several different types of gear that oyster farmers are using or might consider using and looks at the growth they promote, their costs, the ease of installing them, and their susceptibility to fouling organisms which can affect marketability.

Hood said the report is important because of how fast change has come to the industry.

“There are farms that started a decade ago, and their needs are really different from the ones starting now. The forward-looking, experimental side of oyster farming is really interesting to me,” Hood said.

Hood’s journey to Horn Point started at St. Mary’s College of Maryland. She then transferred to California State University, Long Beach, where she earned a bachelor’s degree in environmental science and policy and spent several years working in coastal restoration. That was followed by an outdoor adventure assisting in the building of a school in Madagascar, then the desk job in Washington.

In July 2019, Horn Point’s Hatchery Program Director Donald “Mutt” Meritt retired after four decades at the laboratory. Since then, his position has been split between Hood, who runs the Extension portion, and Alexander, who has been the hatchery manager at Horn Point for more than two decades. They are part of a growing number of women who run hatcheries and have a role in oyster farms and research.

When Hood’s not collaborating with growers to advance the industry, she’s busy working on her PhD in University of Maryland Center for Environmental Science’s Marine and Estuarine Environmental Sciences graduate program. She’s still hoping one of the new people setting more oysters on leased bottom in Maryland will be oyster farmer Shannon Hood.

“For the time being, I’m really enjoying being on everyone’s team, helping all of the farmers to advance their industry,” she said, “But yes, I would still really like to do it one day. Keep an eye out for Uptown Oysters on a menu someday.”

Maryland Sea Grant Extension Specialists Are Here to Help You

Because oysters filter the water and oyster farms create employment opportunities, they have become an important addition to the landscape in waterfront communities. In addition to Hood, several other Sea Grant Extension specialists are focused on aquaculture. Extension specialists help oyster farms get loans, overcome production challenges, and find seafood safety training.

Shannon Hood also worked with Extension colleagues Don Webster and Matt Parker to produce a biofouling handbook. Biofouling refers to the many plants and animals in the Chesapeake that colonize oyster cages and can result in lost crops as well as increased labor; about 5 to 10 percent of the total costs of an aquaculture operation can be attributed to trying to control this fouling. The handbook helps oyster farmers quickly identify the organisms causing the fouling and how best to control them.