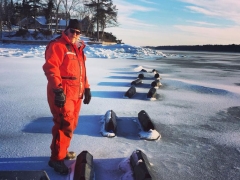 To be a shellfish farmer means long days on your feet, embracing harsh weather while lifting heavy cages. It all takes a toll over time. But a day on the water is another dollar in your pocket, so you push through and persevere. I spent many days out in the heat and in the cold grading, counting, and bagging clams and oysters for whoever was hiring for a season. While I truly enjoyed the work I was doing, some days were rough. I recall one day salvaging any cages I could after a hurricane passed over the farm that ripped several cages open and sent a few others into the nearby cove. On several occasions, I found myself hauling the jon boat loaded with all the equipment to work a full day through inches of snow cover in near-freezing water.

But what if there are ways to make the lives of watermen easier? What can be done to reduce the amount of time out on the water and improve the efficiency of growing, harvesting, and sorting shellfish? These questions are the reason why I decided to come to graduate school at the University of Maryland. My research goal is to develop new techniques and ways of understanding to optimize the grow-out process of shellfish in aquaculture. Through communication and collaborative research with shellfish growers, I am beginning to achieve these goals. 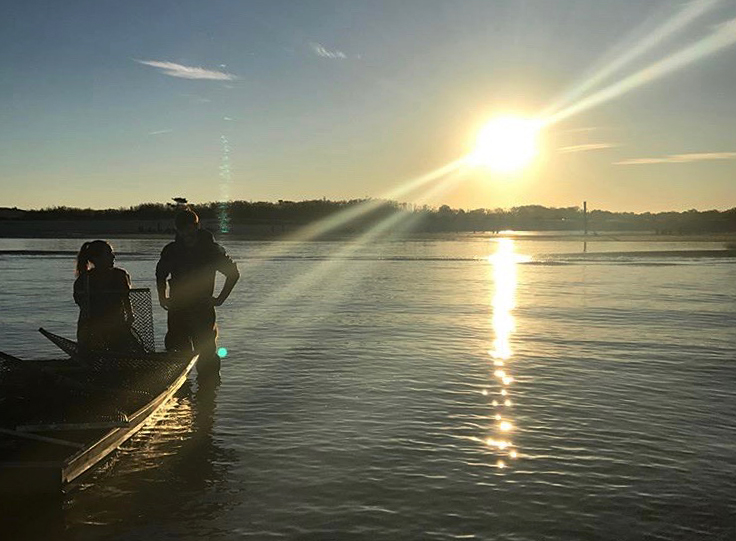 Brendan Campbell brings harvested and sorted oysters to shore at sundown after another day on the job in the Delaware Bay working on an oyster farm. Photo credit: Chris Carol, Cape May, New Jersey

The developments in land-based agriculture over the past two centuries have allowed for an impressive amount of production to supply the world’s needs for food. Innovations such as self-propelled harvesting equipment, genetic modification, and chemical engineering of ammonium fertilizers have allowed for immense growth in agriculture. For the sea, scientists have developed a faster-growing triploid oyster that is resistant to disease and puts all its energy into growth instead of reproduction. Entrepreneurs have worked on automated grading equipment to alleviate the tedium and time of doing everything by hand. Yet aquaculture is not close to the productivity of terrestrial agriculture. 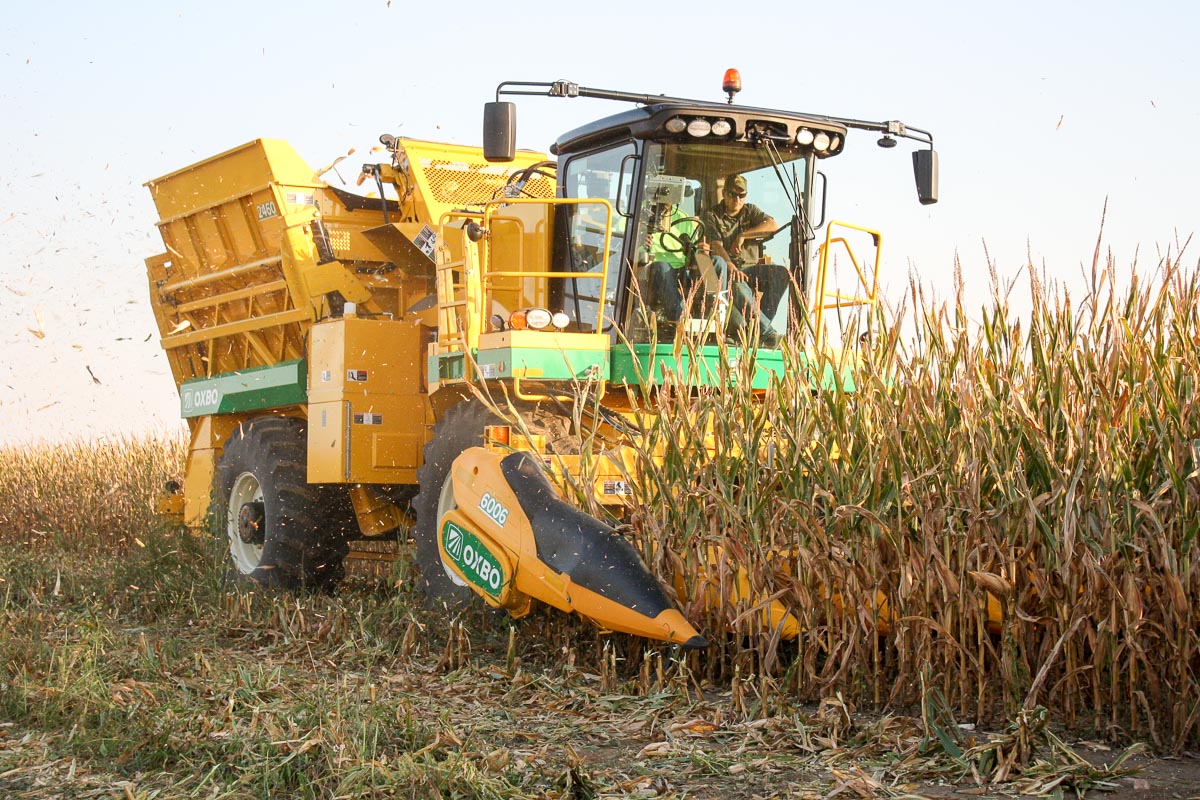 One industrial innovation in land-based farming is the use of self-propelled harvesters. This mid-level model can harvest up to 500 bushels of corn an hour. The leading automated oyster grader can only sort up to 24 bushels an hour. Photo: Oxbo International Corporation, Byron, New York

Working in the water is a newer concept and has challenges. Working on land is more relatable. We understand the mechanisms more because we live in it. In the water however, the rules change. Anything that gets put in the water must be able to resist saltwater and fouling organisms. Fastenings must be secure in all dimensions. Any material in the water must be strong enough to hold up to intense wave energy.

These challenges can be troublesome for farmers. For example, losing cages on the farm due to storm events is a relatively common occurrence because the forces that act on these cages are tremendous. Also, in rainy seasons, farms located on the fresher parts of the bay run the risk of high crop mortality because the water becomes too fresh to survive. Oysters require a precise mix of fresh and salt water, so infusions of fresh water upset that balance and can kill a crop as well as harm reproduction. We can tackle these challenges and make lasting improvements in the industry, but it will take farmers, engineers, and scientists all making an effort.

My current role in the growth of shellfish aquaculture is understanding how water flow interacts with the equipment used in aquaculture. Understanding how flow interacts with aquaculture gear is important in optimizing the growth of shellfish. For example, oysters are suspension feeders, which means they draw in water containing microscopic plankton and algae to feed on and grow. How the water flows around the oysters will affect how they can feed. If the flow is too fast or too slow, the oyster is not able to feed well and cannot grow as fast. To ensure that the shellfish are feeding as fast as possible, I am developing tools that farmers can use to check the water flow moving through oyster cages. 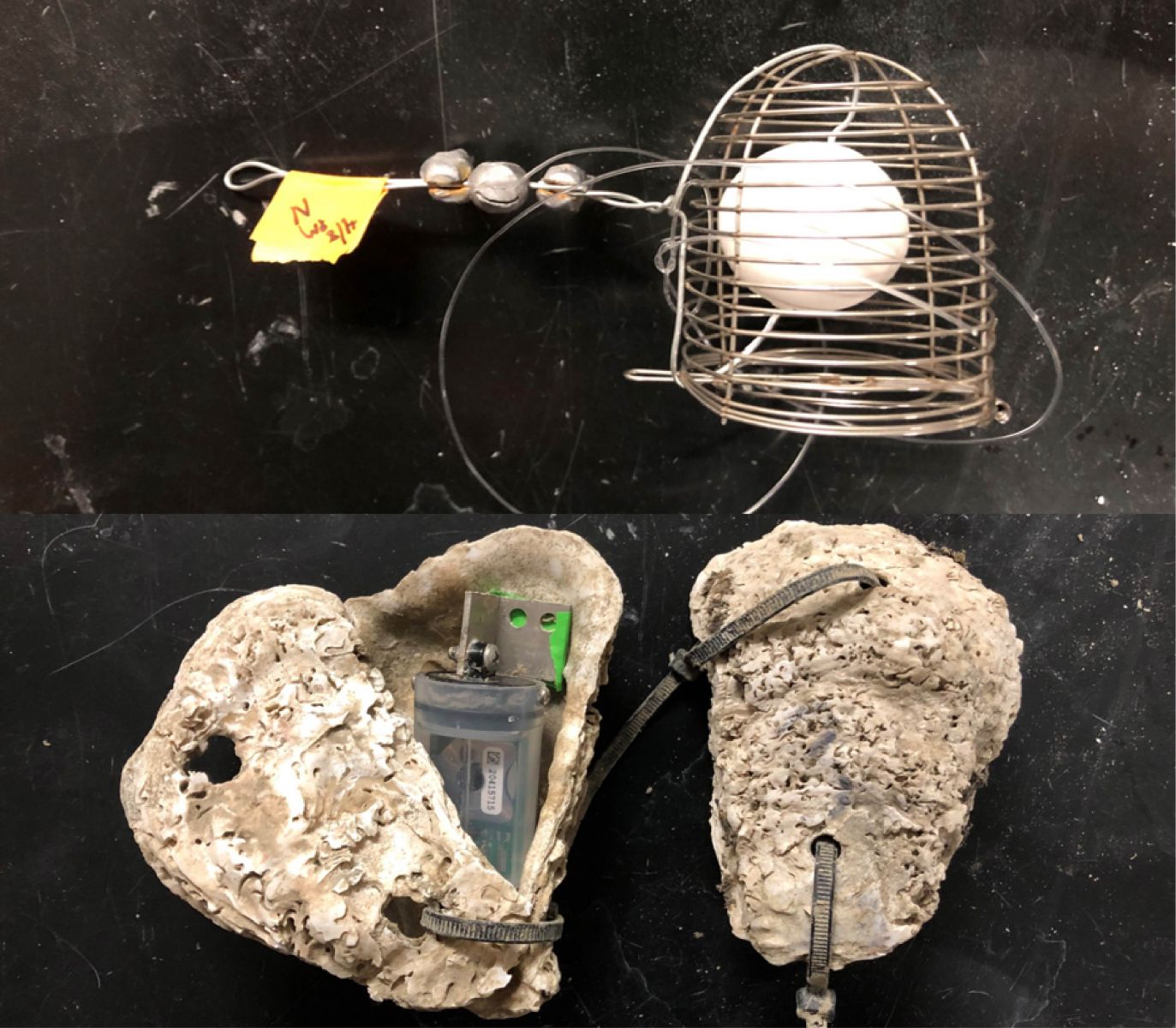 Clod cards (top) are used to monitor flow. The faster the plaster ball inside dissolves, the faster the water flow is. This accelerometer (bottom) is placed inside an oyster shell to see how much an oyster moves in an oyster cage. Photo courtesy of Brendan Campbell

These tools are inexpensive and easy to use, so farmers do not have to stretch tight budgets. The device is simply a plaster ball that dissolves as water passes by it. The flow can be determined based on the amount of plaster that dissolved away over time. If a farmer can tell how fast the water is moving through one of their cages, they can alter the arrangement of the cages or the type of cage so that the oysters inside can live in an environment that allows them to eat and grow as fast as possible.  Therefore, the information gathered helps make investment in the tool pay off.

Each ball is made from household materials and costs less than one dollar to make. They do not add volatile chemicals to the water–less than 30 percent of the plaster gets dissolved and the material is mostly gypsum, which is mostly made of calcium sulfate and sometimes acts as a balance in freshwater tanks.

I am also working on using tools that can show how much the water moves oysters around inside cages. This tool uses an accelerometer that is fastened inside an old oyster shell. The accelerometer tracks how far the shell moves every minute and resembles the amount of motion that an oyster experiences while in a cage. It is the industry’s belief that the more an oyster moves around in a cage, the deeper its cup will be and the more marketable it is. The notion is that the more an oyster moves around, the ends of the shell break off so instead of growing long and wide, like a pancake, they grow deeper, like a cup. Giving farmers the ability to see how much their oysters move around in cages will help them to have better control over the quality of their product.

Despite the challenges in thinking innovatively about shellfish aquaculture, the rewards are immense. Future generations of shellfish farmers may not need to work so hard to earn a living as I once did; they can put more of their energy into what’s growing inside the cages, and less into lifting them.

Photo, top left: A bad day on an oyster farm in Maine—these floating cages froze over, and only the cage floats are visible. Credit: Mere Point Oyster Co., Brunswick, Maine

Learn more about this student: https://www.mdsg.umd.edu/fellows/2019/brendan-campbell