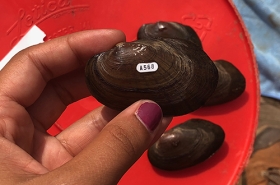 In March of 1791, French architect Pierre Charles L’Enfant came to Washington to build a city atop a marshy expanse. From the hill where the United States Capitol would eventually be placed, he envisioned a city that would grow between two rivers, the Potomac to the west and the Anacostia to the east. The city built out to the west, following the Potomac, with a neat grid for streets and a large public gathering space at the National Mall.

The Potomac became the “Nation’s River.” The Anacostia became known as the “Forgotten River,” with its shores a repository for highway interchanges, military bases, and industrial activities.

We don’t know how the Anacostia’s fortunes would have changed if L’Enfant had looked east. But a couple of decades ago, other city leaders and planners began to turn their heads toward the Forgotten River. A Major League Baseball stadium, Nationals Park, opened in 2008 in the Navy Yard district. And local environmental groups as well as the city and neighboring counties undertook major efforts to reduce the stormwater, sewage, and trash that flowed into the Anacostia.

One group, the Anacostia Watershed Society (AWS), which both grades the health of the river and advocates for its restoration, also began to wonder if a tiny bivalve might help. While many tributaries on the Eastern Shore and in Southern Maryland use oysters to restore habitat and filter the water, salinity levels in the Anacostia are too low for oysters to thrive. In other freshwater places, including Kentucky and North Carolina, mussels are the filter feeder of choice for restoration efforts. These bivalves can filter as much as 20 gallons of water a day, create habitat for other wildlife, and reproduce to help grow the native mussel populations already in the river. Maybe if the Anacostia was improving due to major efforts centered on limiting the impacts of sewage treatment and stormwater, then it was ready for the more incremental benefits mussels could bring by restoring them to its watershed. 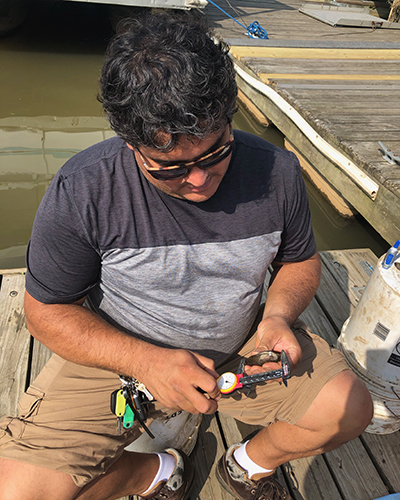 AWS got ready to take action in 2015 (you can follow their journey in this story map), with the hope that the river would improve enough so that the mussels would not simply become smothered in sediment or suffocate in low-oxygen conditions. Members secured permits to put the mussels in the water and worked with the U.S. Fish and Wildlife Service to collect broodstock from the river and propagate the mussels in a hatchery in Charles City, Virginia. They also surveyed the river to determine where the mussels lived, how many species existed, and which ones seemed to do the best and where. Seven sites were identified in the river—six in the District and one in Maryland—to place the mussels and see how they grew. Then, they got to work.

In 2018, AWS’ stewardship program specialist Jorge Bogantes Montero and his partners at the District Department of the Environment (DDOE), DC Water, and the Maryland Department of Natural Resources were ready to deploy their mussel power. With about $30,000 from the EPA Urban Waters Grant Program, the team placed about 8,000 mussels, each about half an inch long, in the river and adjacent ponds. They used three species: Eastern pondmussels (Ligumia nasuta), Eastern lampmussels (Lampsilis radiata), and alewife floaters (Anodonta implicata).

The mussels were placed in the water in the fall. Now, a year later, they are more than two inches long in many places, and measure up to three inches in some sites that had excellent growth. Mortality is at only 3 percent, Montero said. That is far lower than he expected based on other shellfish efforts. Many oyster and clam farmers see a 50 percent mortality their first year, and historically, Maryland DNR has reported a 50 percent mortality for their oyster plantings. Montero estimates these mussels have helped to filter more than 32 million gallons of water in the Anacostia. 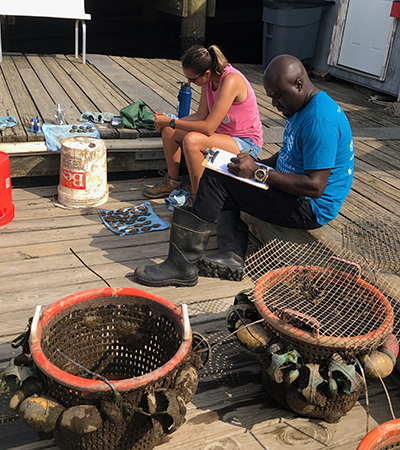 Although sizable, it’s important to note that these are not the marine mussels one would order in a restaurant with crusty bread and a white wine. Though the species in the Anacostia are edible, the water that they are cleaning currently is not. The river received its first passing grade in the State of the Anacostia report last year and the river’s advocates are hoping to have a swimmable and fishable Anacostia in 2025. However, it will be a long time before it will be safe to put these mussels on a plate.

This month, Montero and his colleagues have been releasing the mussels from floating baskets at various sites onto the river’s bottom, where they will mix with the natural reproductive populations that they came from. As Montero said, “the mothers of these mussels are from the Anacostia River.” The AWS restoration team still has many questions. How much nitrogen do these mussels filter and how long does it take? How well do the mussels reproduce and where? And how do they ingest microplastics and how does that process compare to oysters?

On Monday, September 30, Montero and volunteers will paddle canoes into the wetlands around Kenilworth Park (4000 Deane Ave., NE) in Washington, D.C. for the first public mussel release associated with the project. The event begins at 10 a.m. 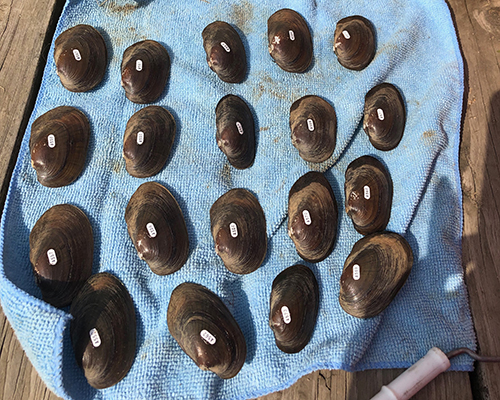 Eastern pondmussels laid out next to the river where they’ll soon return. Photo credit: Rona Kobell

There are more opportunities to get answers now. With a $400,000 grant from DDOE, Montero said, they will be putting 35,000 mussels in the water over the next two years.

“In the Chesapeake Bay, we have goals for oysters. We’d like to have goals for mussels. Like, say, maybe one million a year?” Montero said. “We should go big . . . but we’re not there yet.”

Maryland Sea Grant and Chesapeake Quarterly are here to highlight such restoration efforts. More than a decade ago, we devoted an issue of the magazine to the mussels, clams, and other filter feeders that help clean the water.  Over the past year, we’ve been working with a Howard University student, Alexandra Grayson, to chronicle the move toward restoring mussels in the Anacostia River and Bay watershed.

Part One of Alexandra’s series focuses on why we are now looking to mussels.

Part Two looks at the challenges in getting policies to change so that governments and nonprofit groups can put mussels in the water.

Part Three wades into the river to see what AWS’ efforts look like. Literally—Alexandra donned her waders and was lifting the mussel baskets from the water.

Mussel love is spreading. The Partnership for a Delaware Estuary is working to construct a freshwater mussel hatchery. Kentucky is working on programs to spread mussels throughout its waterways. North Carolina researchers are looking at how well mussels filter out contaminants.

And we’ll continue to check in with Bogantes and AWS to see if mussels are flexing their biological powers in the Anacostia.