Mussels in Action in the Anacostia River 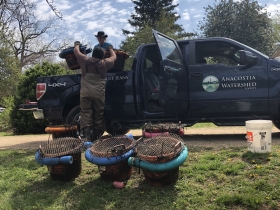 Once called the “Forgotten River,” the Anacostia has been beset with trash, sediment, and pollution from nearby industries for decades. George Washington and Thomas Jefferson viewed the Anacostia as part of the new federal city when Washington was estabilished as the nation's capital in the late 1700s. But architect Pierre L’Enfant, who designed the city from scratch, saw the Potomac as "the city’s river" and the Anacostia languished. A 1900 report from the Board of Trade called it an “uninviting river” with “miasmatic swamps, whose baneful influence is so seriously felt by a large portion of the citizens of Washington.”

However, the river has begun making a comeback. A stormwater tunnel project that began recently was designed to help, as it will hold runoff instead of simply releasing it into the river. The Anacostia has also become more a part of the city’s lifeblood. In a quickly gentrifying city that needs more space for more people, developers have been building new construction and renovating older homes in neighborhoods along the river. The new ballpark for the Washington Nationals is also close to its banks. 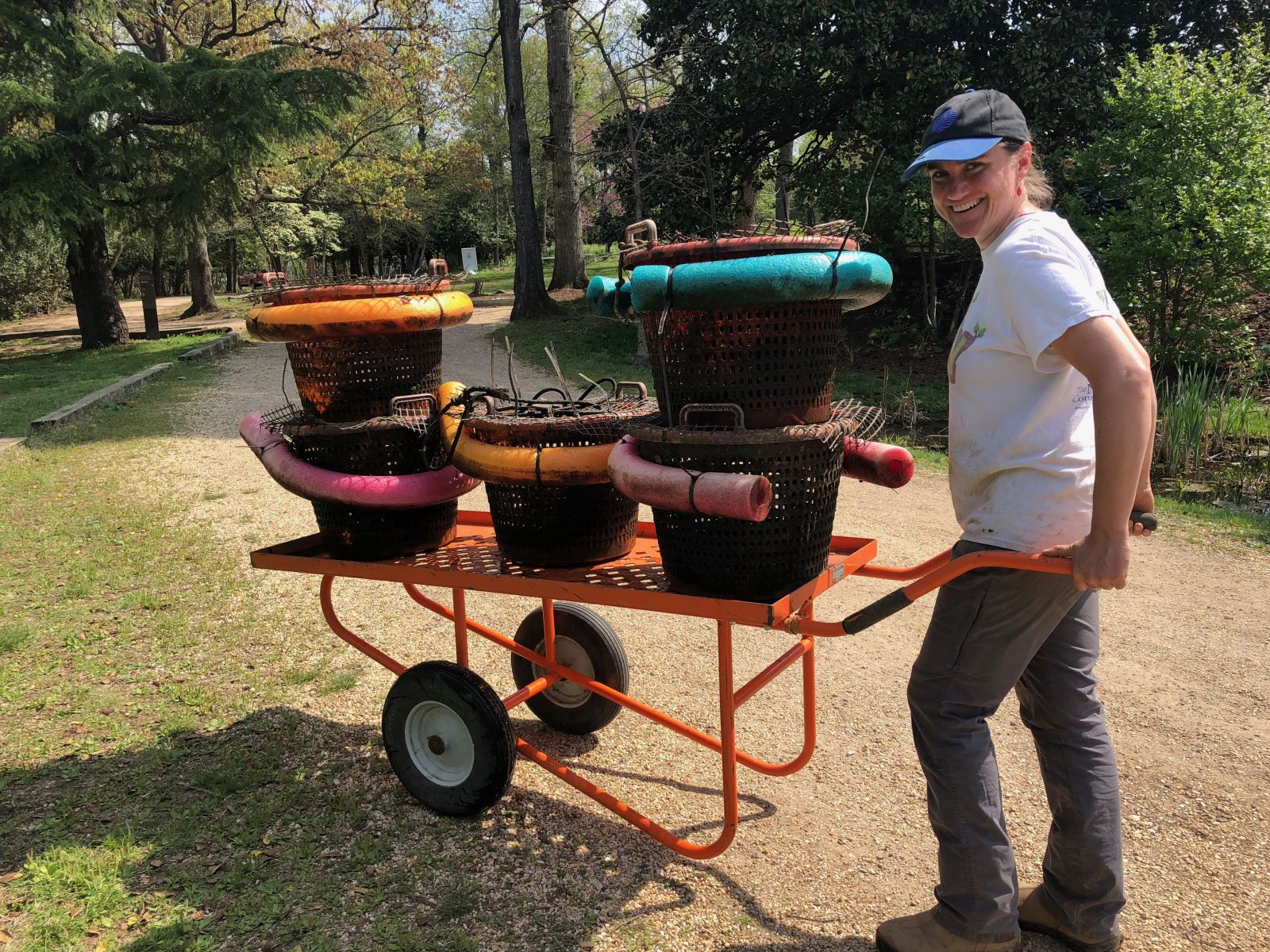 The mussels get a lift to the Anacostia with a volunteer. Photo credit: Rona Kobell

But there’s more to do to restore the river, and mussels may help. The native filter feeders pull nitrogen and phosphorus, two major sources of nutrient pollution, out of the water. Their numbers have dropped significantly due to ecological pressures, so in an effort to increase their presence the Anacostia Watershed Society (AWS) began a project to reintroduce native mussels. The project has grown from conducting surveys of mussels in the Anacostia River in 2015 to a complete species reintroduction project that started last summer.

The project uses Eastern pondmussels (Ligumia nasuta) and Eastern lampmussels (Lampsilis radiata) donated from the United States Fish and Wildlife Service, along with alewife floaters (Anodonta implicata). All are split between seven sites in DC and Maryland. The project has also recieved support from an EPA Urban Waters Grant of $33,000 and lots of in-kind contributions from volunteers, mussel wranglers, drivers, and biologists.

Just last year, the Anacostia River received its first passing grade in water quality. The presence of mussels as a filter feeder and as a provider of habitat for other organisms likely wasn’t a factor. But project leaders believe it could become one as the work progresses and mussels take hold.

On a muddy morning this spring, I joined Anacostia Watershed Society staff and volunteers at Kenilworth Aquatic Gardens where they were preparing to redeploy mussels from two overwintering sites to five other sites that AWS identified as suitable mussel habitat throughout the river.

I chatted with other volunteers — a biologist, home-schooled children, and community members — as we picked out waders to wear in the cold water. The mussels were living in bushel baskets, just like ones used for oyster gardening, that were surrounded by aquatic plants. We navigated through the grasses to reach the mussels, then made our way out of the cold water to place the baskets in trucks where they would then travel to their respective sites throughout the Anacostia River. 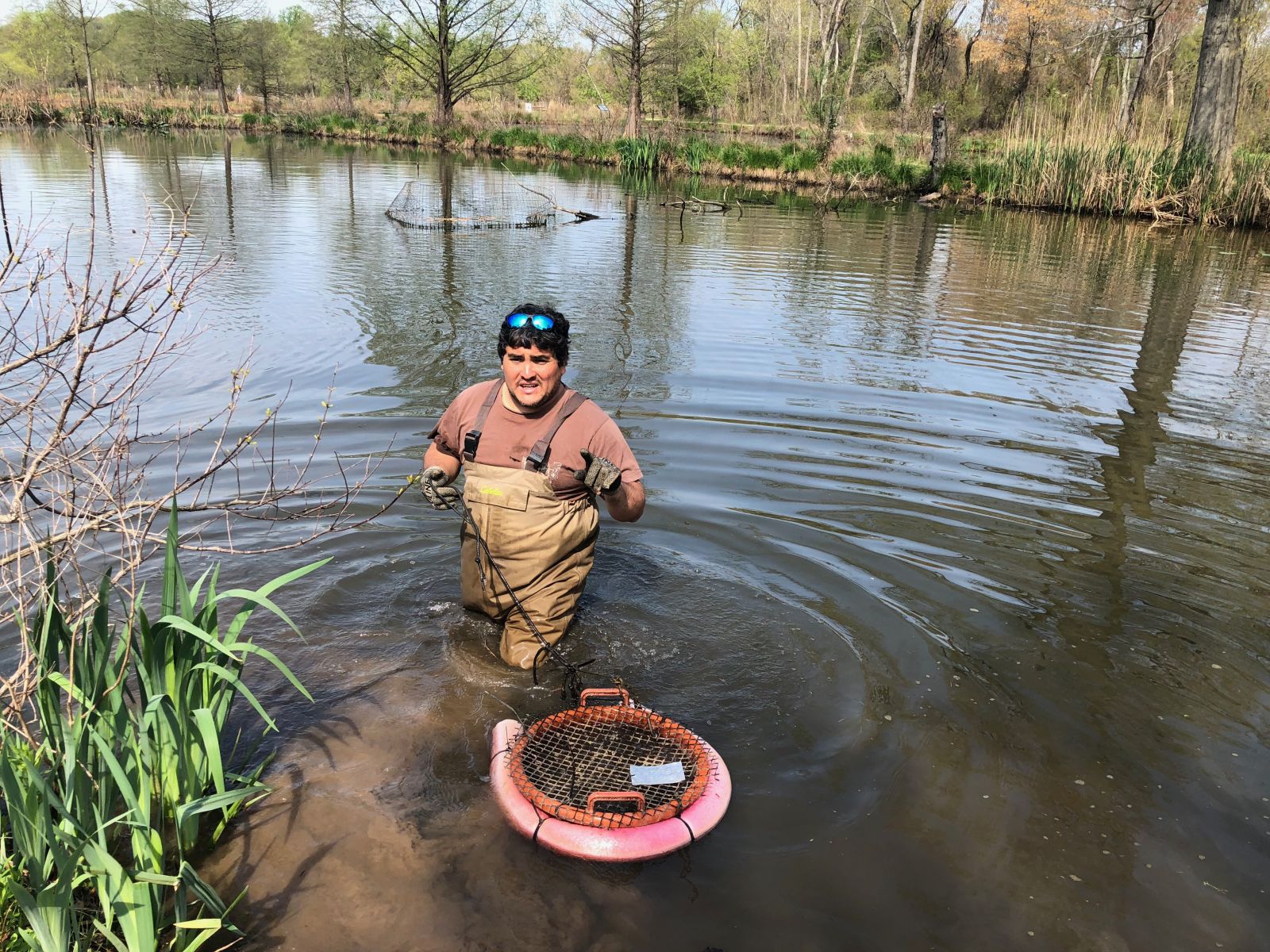 Jorge Bogantes Montero of the Anacostia Watershed Society gets the mussels ready to transplant from their over-wintering site in Kenilworth Aquatic Gardens to the Anacostia River. Photo credit: Rona Kobell

I tagged along with Jorge Bogantes Montero, an Anacostia Watershed Society natural resources specialist who leads the project, to place the mussels in water at the Langston Golf Course, where they will stay until they return to the gardens for the winter season. Between December and March, the AWS mussels live at Kenilworth Aquatic Gardens to minimize risks and prevent the mussels from being subject to the occasional blowout tide, when strong winds blow water out of a waterway. That has happened at sites like the Langston Golf Course, where the mussels were lost.

Montero updated us on some of the growth that has occurred since the start of the project. He informed us that from August to November, the mortality rate was low — 3 percent — and mussels have grown from half an inch to two inches since the project got underway.

He also shared that during their first months in the hatchery, the mortality rate tends to be a lot higher, but once they leave the hatchery, the rate drops. The most plentiful site for mussels is Buzzard Point, where the AWS mussels and naturally occurring ones seem to thrive at the confluence of the Potomac and the Anacostia.

With continual data collection and assessments of the state of the mussels in the river, along with augmenting the numbers of mussels that are currently planted, Montero and his colleagues are hopeful that the Anacostia River will continue to receive passing grades on water quality reports as the river did in 2018. The Anacostia Watershed Society’s Freshwater Mussel Restoration Project alone can’t restore the river, but it can be one of many factors that help on the road to recovery.

Photo, top left: Jorge Bogantes Montero of the Anacostia Watershed Society loads the mussels up on Blue Jeans, the AWS' pickup truck, for transport to the Anacostia. Credit: Rona Kobell