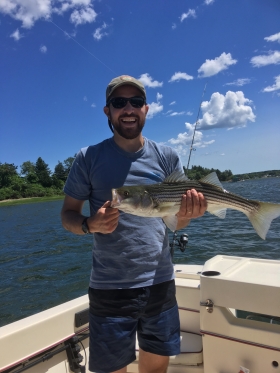 Growing up on Cape Ann, north of Boston between Massachusetts and Ipswich Bays, Jim LaChance seemed to always have one foot on the land and the other in the water.

Often he joined his father, grandfather, and great-grandfather as they fished near shore or dug for clams on the flats. But just as often LaChance and his siblings would eagerly wait on their family’s boat while their father dove “for awesome stuff to eat and look at.” His extended Italian-American family took the Feast of the Seven Fishes seriously, with his forebears catching a spread that he’d look forward to all year. Mindful of the graying fleet in Gloucester, LaChance attended Emory University as a biology major, thinking he would find a way to combine his interest in fishing with his love of science.

After stops in Georgia, Pennsylvania, and California, he’s finally found it. As aquaculture projects coordinator for Maryland Sea Grant, LaChance has an opportunity to use both his familiarity with a maritime culture and his knowledge of biology to help support Maryland’s aquaculture industry. Among other duties, he will be helping conduct a survey of the industry’s needs as a result of COVID-19 and determining the economic impact of farm-raised seafood in the state.

LaChance, who has a master’s from Brown University in environmental studies and is a doctoral candidate at University of California, Berkeley in environmental science, said he is looking forward to getting out in the field once he’s able to do so and learn more about aquaculture and fisheries in the Mid-Atlantic.

South of Baltimore, Maryland Sea Grant Extension’s Matt Parker is helping oyster farmers in his role as an aquaculture business specialist to develop sustainable business plans statewide out of Prince George’s County, and Brittany Wolfe is managing the oyster hatchery at Patuxent Environmental and Aquatic Research Laboratory in Calvert County, which is part of Morgan State University. Across the Chesapeake, associate agent Shannon Hood is working with colleagues on new techniques for effectively growing oysters at Horn Point Laboratory’s demonstration oyster farm. Also on the Eastern Shore, longtime regional specialist Don Webster is working with farmers on remote setting techniques to grow oysters on the Bay’s bottom, and Maryland Sea Grant’s inaugural law fellow, Elissa Torres-Soto, is focusing on the intersection of oyster farming and regulations in the state while working with the University of Maryland Agricultural Law Education Initiative.

Like everyone else, LaChance is conducting most of his work remotely over Zoom and Webex these days. What’s helped him prepare, he said, is a strong stakeholder network that keeps him grounded in important sustainable aquaculture and fishery issues. It helps that LaChance recently completed a year as a Knauss fellow working in the Capitol Hill office of Senator Ed Markey. Many of the constituent groups approaching the Massachusetts Democrat were familiar to him from both his doctorate and master’s research, the latter focusing on the resilience of oyster aquaculture in New England. He estimated he interviewed more than 10 percent of the oyster farmers in New England.

LaChance is familiar with farming on firmer ground, too. Before graduate school, he worked on a small farm in Massachusetts growing vegetables and caring for livestock. He then worked at Penn State University on a research and extension project introducing biodiversity into grain crop rotations, mainly through mixtures of winter cover crops. He continued his work talking to farmers in California, when he produced an article titled, “’We can’t just be a county that supports inebriants’: Voices of the noncannabis agricultural community,” which ran in a special issue of California Agriculture in 2019.

LaChance met his wife, Nancy, a labor and delivery nurse, while working at the Massachusetts farm. They live in Hyattsville, Maryland, with their daughter, Carmen, who he said is the main and most appreciative audience these days for the one-time music minor’s classical guitar riffs.

Though he’s still figuring out his new position, he said it already seems like a great fit.

“I like food, and I like the folks who produce food,” he said. “Here, in Maryland, I’m excited to be better connected to the Bay.”

Photo, top left: Jim LaChance grew up fishing in Massachusetts, and is looking forward to doing more of it in the Chesapeake Bay. Courtesy of: Jim LaChance