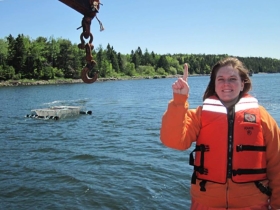 Catherine “Cat” Frederick wanted to be an Extension specialist before she even knew what one was.

Frederick, who completed her doctorate at the University of Maine in marine bio-resources, found herself drawn to fieldwork and public outreach from her earliest days in marine science. She was always raising her hand to volunteer to collect catfish eggs at hatchery ponds or to bring paddlefish to a farmer’s market for an aquaculture demonstration. She loved working with industry to understand their methods for growing fish. On class outings in the field, no one seemed to like crawling around in the pungent marsh mud as much as she did. It became clear that she would prefer a scientific career interacting with industry and the public–if only she could figure out what it was.

“As a Master’s student, I was constantly trying to do extension-related work. I didn’t have a word for it, but when I got to my PhD program, I met an Extension person,” she said. “That’s when I realized, ‘oh, wait a minute.’ I’ve always been more field inclined, less lab-based, and I’m always up for anything that gets me working with the public.’”

Frederick is employing those skills as the new Extension specialist for the Recirculating Aquaculture Salmon Network, known as RAS-N. The network is the framework of a multi-state consortium to study how to grow Atlantic salmon (Salmo salar) in innovative, environmentally responsible land-based aquaculture systems. Funded with $1.2 million from the National Sea Grant Office, the effort includes Maryland Sea Grant, Wisconsin Sea Grant, Maine Sea Grant, and several large aquaculture companies as well as universities and federal labs. The grant’s principal investigator is Yonathan Zohar, chair of the Department of Marine Biotechnology at University of Maryland, Baltimore County. Zohar is based at the Institute of Marine Environmental Technology at Baltimore’s Inner Harbor; Frederick is also based there, though she’s been working from her home in Baltimore since the pandemic.

Moving several hundred miles during a pandemic to begin a new job that requires a lot of face-to-face interaction when such gatherings are prohibited was not ideal, but Zohar said Frederick settled in quickly to the demands of the work. With the network up and running, the main tasks now he said, are creating a plan for how to discuss and build capacity for land-based salmon aquaculture and to get the groups of different stakeholders to collaborate, share information, conduct surveys, and help put together a white paper on how the industry should move forward.

Over the past several years, Zohar said, American companies have invested around $1.5 billion in land-based salmon aquaculture. But success requires coordination, Zohar said–among the main research institutions, the companies that make the feed, the ones that build the infrastructure and raise the fish.

“We don’t want to tell industry what to do. We want to listen to the industry and what they need,” Zohar said. “What Cat is doing now is soliciting input from stakeholders, so we are all brainstorming together, and doing everything possible to build capacity for this booming sector of U.S. aquaculture.”

The RAS-N opportunity reached Frederick during a rare lull between positions. Born in Tacoma, Washington, and raised in San Diego, Frederick’s family moved to Louisville when she was in high school. She graduated from Coastal Carolina University in South Carolina in 2010 with a bachelor’s degree in marine science, then returned to Kentucky to earn her master’s in aquaculture and aquatic sciences at Kentucky State University in 2014. She completed her doctorate in 2018 at the University of Maine, with a focus on marine aquaculture and fish health, including infestations of parasites like sea lice.

Frederick had been teaching biology as an adjunct professor at Husson University in Bangor, Maine, when several friends and colleagues sent her the posting for the RAS-N position in Maryland.

“I felt myself getting a bigger smile as I read each bullet point. I said to myself, ‘this is you in a job description.’ I had such a strong positive feeling about it. It felt 100 percent me,” she said. “And my community thought so, too. The people I had built up a career network around saw it as for me–and that was really compelling.”

Frederick said the pandemic gives RAS-N even more relevance–there is an opportunity to strengthen what she calls our “food security system,” referring to both the abundance of food and consumers’ comfort with where it comes from. She saw firsthand in Maine how myths about net-pen salmon farms dissuaded customers from buying those products. She said educating consumers through outreach, fact sheets, and a compelling website will be key. A domestic source of salmon, raised sustainably through recirculating systems, could help augment food supply chains as well as allay fears about fish raised via aquaculture abroad in countries with different environmental standards.

“I see a lot of potential to address the issues the consumers are concerned with. I wanted to be in a position to make an impact for both industry and consumers,” she said. “This is going to be a forward path for our food industry, and I want to be a part of it.”

Added Zohar: “To be a great Extension specialist, you have to be a great communicator. She has very good communications skills. She is the right person for the job, really, and I think we were lucky to get her.”

Photo, top left: Cat Frederick completed her doctorate work at the University of Maine, where she studied parasitic diseases in aquaculture. Photo courtesy of Cat Frederick