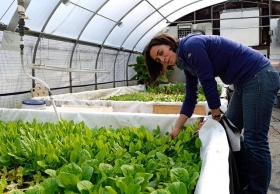 Aquaponics may not be a household term just yet. But this method of producing food -- which combines the practice of raising fish with growing vegetables -- is becoming increasingly popular among urban farmers. Researchers at the Johns Hopkins Center for a Livable Future say that there's good reason for that: with aquaponics, farmers can produce two types of food, seafood and greens, using the same set of equipment. In this podcast, Daniel Strain tours an aquaponics farm that the center operates in the middle of Baltimore. There, he learns what makes fish and veggies such a good team.

Daniel Strain: The temperature is below freezing. But that isn't keeping a host of shoppers -- and one brave accordion player -- away from the 32nd Street Farmer's Market in the Waverly neighborhood of Baltimore. Dave Love is working the stand this morning for the Farm Alliance of Baltimore.

Dave Love: So we've got some romaine lettuce. We've got watercress, and we've got Swiss chard.

DS: The Farm Alliance is a collection of urban farmers who grow and sell food in the city. Dave Love is one of those farmers. He's also a scientist who specializes in public health at the Johns Hopkins Center for a Livable Future. He's here this morning to support an innovative way of growing food. It's called aquaponics. Those greens that Love mentioned -- they were all grown using that same method. He and his colleagues think that aquaponics can be a valuable new tool for urban farmers who care about growing food in a sustainable way. Still, not everyone at the farmer's market this morning knows what it is.

DS (on site): Can I ask you, do you know what aquaponics is?

DS: Okay, so what is aquaponics? For an answer, I turn to one of Love's colleagues, Laura Genello. She says that aquaponics is actually a combination of two different types of farming.

Laura Genello: One system is aquaculture, which is the practice of raising fish.

LG: And the other system is hydroponics, the practice of growing plants in water.

DS: And two. So aquaponics is one part fish and one part plants. But how do those two go together? To show me, Genello gives me a tour of an aquaponics facility that's operated by the Center for a Livable Future. It's also in Baltimore, about four miles from the farmer's market where Dave Love sells his lettuce and watercress.

LG: And we are located at the Cylburn Arboretum.

DS: Genello shows me into an ordinary-looking greenhouse. Inside, the temperature is approaching balmy, despite the chilly weather outside. Genello is the farm manager here. She explains that facilities like this one are designed to recycle water -- pumping gallons and gallons of fluid and nutrients like nitrogen around in one big circle. It starts with the fish.

LG: So what we have here is we have four tanks filled with about 200 tilapia total.

DS: The tilapia are cream-colored, and some are nearing two pounds. Genello and her colleagues sell the bigger ones to a local restaurant called Woodberry Kitchen. But the rest of the fish are, essentially, the engine that drives this aquaponics system. That's because they make, well, fish poop.

LG: So in aquaculture, whenever you raise fish, you end up with a huge amount of fish waste that you need to deal with in some way, or it becomes a pollution source.

DS: That’s where the plants come in. Fish waste, while dirty, is also rich in nitrogen and phosphorus — the same nutrients that plants need to grow. So put the two together…

LG: So we're going to use it as a fertilizer, and the plants are actually to filter the water for the fish.

DS: Which is what's happening now. Genello explains that water is pumped out of the fish tanks to a filtration apparatus that strips out all of the solid bits. Helpful bacteria also convert the nitrogen in the fish waste, which is mostly in the form of ammonia, to a form of nitrogen that’s less harmful in high concentrations to the fish. It’s called nitrate.

LG: And then from there it flows into our plant beds. And these beds are just shallow troughs of water with Styrofoam rafts floating on top, and the rafts that we’re using are actually all recycled cooler lids.

DS: The plants grow on those styrofoam rafts, dipping their roots directly into the water below. And the plant beds are erupting with green life. 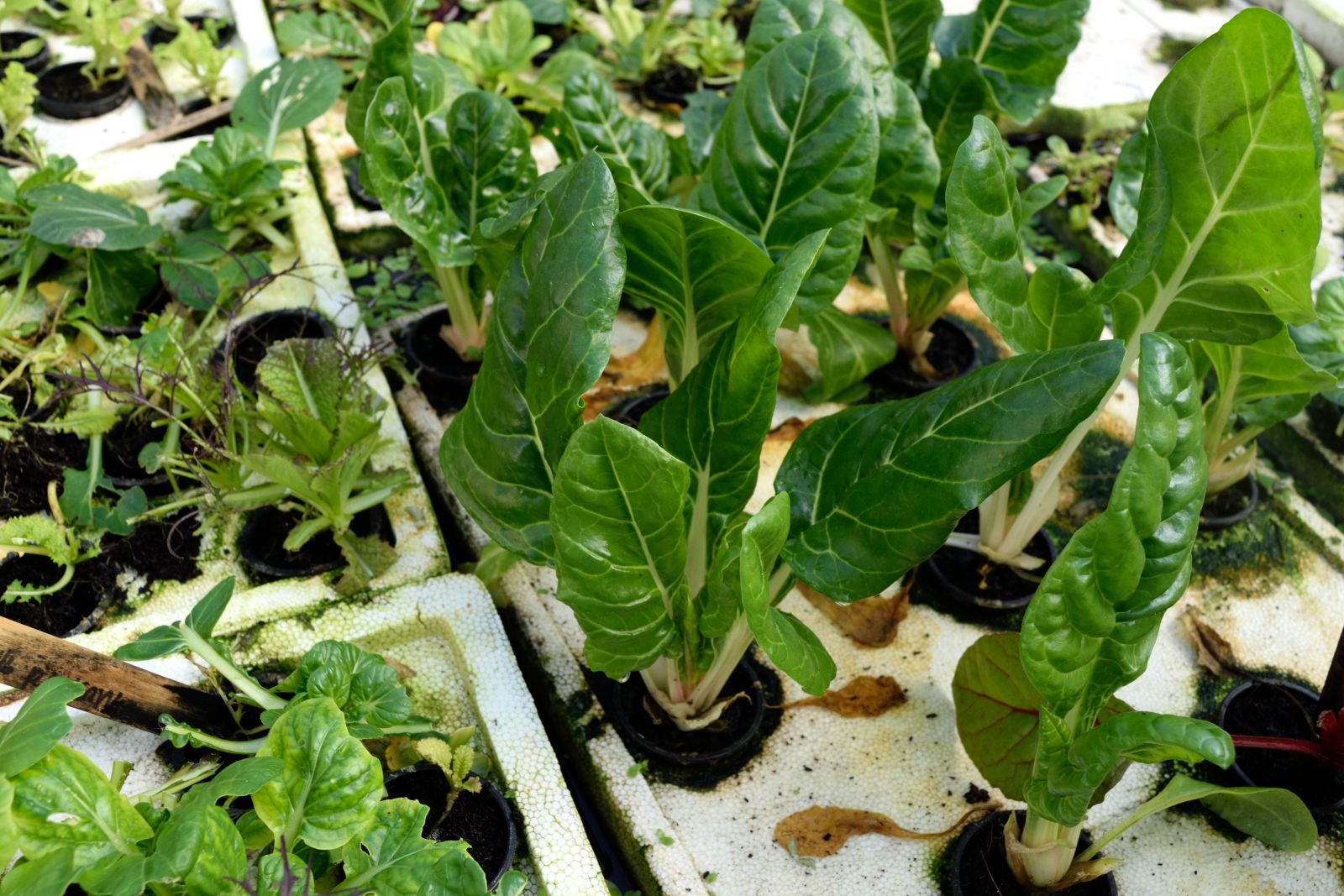 LG: We found that leafy greens tend to really do the best. So things like lettuces, kale, Swiss chard.

DS: If everything is working right, all of those plants will pull large amounts of nitrogen out of the water. Then, the system pumps that clean water back to the fish, where the process starts all over again. One of the benefits to growing food this way, Genello says, is that at the end of the day, you're producing both greens and fish.

LG: So it's a neat food production system in the sense that you can produce two crops in one.

DS: Of course, it takes a lot of engineering skill to build and maintain a facility like this one, Genello says. That's why Johns Hopkins operates this system: to show people what it takes to run an aquaponics farm. Still, Genello adds that because aquaponics systems use nutrients so efficiently, they support a lot of plant growth. That can make them a good fit for urban areas where space is often at a premium.

Which is something that Baltimore resident Diego finds appealing. He’s visiting the Johns Hopkins facility today with his three kids, the youngest of whom is two.

Diego: So I have dreams of becoming like an urban farmer possibly, so I'm always researching various types of farming techniques for growing vegetables.

DS: He says that as a parent in Baltimore, it can be difficult to find nutritious food that's also reasonably priced. Aquaponics represents one solution to that problem. His kids like the idea, too.

DS: And that's something to brave the cold for.

Photos:  Laura Genello (top) checks plant and fish growth in the aquaponics greenhouse at the Cylburn Arboretum operated by the Center for a Livable Future. Leafy plants (bottom) draw nutrients out of water with fish waste.