Salty Streams: How clearing snow can hurt the Chesapeake 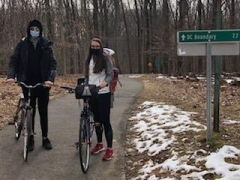 In the winter, we can see salt on the roads after a light snow. But where does that salt go when spring has come and the roads are clear?

To find out, we got on our bikes. I set out on a cold February morning along with an undergraduate student from the University of Maryland, College Park, with sample bottles bungee-strapped to the back of my bike in a milk crate. We were starting about 8 miles north of the District of Columbia in Veirs Mill Park in Silver Spring, Maryland, and were going to collect water samples along Rock Creek in hopes of characterizing the behavior of salts and their chemical impacts along the length of the river from urbanized to forested ecosystems. I was doing this work as part of my studies in the geology department, where I am working on my doctorate. Also with us was Sujay Kaushal, a professor in UMD’s Department of Geology, who studies the impacts of salt in natural streams as well as waterways that have been urbanized and rerouted underground via pipes and culverts.

We know that salt from de-icing chemicals dissolves and runs off roadways with the melted snow and ice, where it can then make its way into groundwater and nearby streams. After multiple winter snowstorms the streams can accumulate increasing levels of salt—a process called salinization. A 2005 study found some rivers in Maryland, New Hampshire, and New York had a quarter to a half the saltiness of seawater during the winter! The term freshwater salinization syndrome describes this process of increasing salinization over time. Other sources of salts can include building and road materials, construction, fertilizers, water softeners, sewage, and wastewater effluent.

Because of this, salinization does not only impact snowy regions, but is a global issue. A consistently saltier environment drastically alters the chemistry of freshwater ecosystems and creates an inhospitable home to many aquatic organisms, such as mayflies, caddisflies, and rainbow trout. Highly sensitive and native organisms are unable to survive in these salty conditions. Salt-tolerant invasive species, on the other hand, thrive in a range of salinities and easily repopulate and survive, such as certain diatoms and mosquitofish.

The influx of salt not only harms aquatic life, but can also cause the release of toxic metals, present in soils from a range of sources including industrial and transportation emissions, into rivers. The metals are attracted to the soil like the positive and negative side of a magnet that want to touch. Like a magnet, the soil and the metal also have charges. The soil has a negative charge, and the metals have a positive charge. When we add salt, we are adding positive charges into the stream that are more attracted to the soil. The metal is not strong enough to stay attached to the soil and is released into the water. Once in the water, the metals flow downstream and seep into groundwater sources, potentially impacting reservoirs and aquifers that serve as drinking water sources. In high doses, these metals can cause a variety of health problems, ranging from nausea, vomiting, and diarrhea, to learning deficiencies, skeletal abnormalities, and cancers.

Over our 16-mile bike ride downstream, we noticed the salt levels were slightly increasing even though we were within a forested ecosystem. Stormwater outfall pipes were carrying high salinity stormwater from urban areas to Rock Creek, causing the salinity to rise. I am now analyzing the samples on equipment for dissolved carbon levels, a variety of ions, and organic matter to help understand the transformation and transport of salt along Rock Creek. I am excited to continue to collect and analyze samples to improve our understanding and help find a solution for freshwater salinization syndrome.

Learn more about this student: /fellows/2020/carly-maas