Living, Learning, and Interning on the Okeanos Explorer 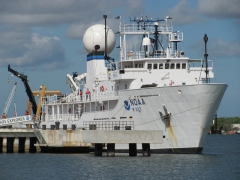 Rachel Husted is an undergraduate serving as an intern on a NOAA scientific expedition currently underway in the North Atlantic. Maryland Sea Grant sponsored her to join this project. Check back to read her updates about her and the ship's journey.

NOAA’s Okeanos Explorer, “America’s Ship for Ocean Exploration,” is a truly unique place. It is the only federally funded U.S. ship with a mission of systematically exploring the largely unknown ocean solely for the purpose of discovery. From the moment I climbed aboard I have been constantly learning. What excites me most as I begin my experience as a mapping intern is not only the opportunity to live on a research vessel and develop new skills in seafloor mapping, but the chance to directly participate in the advancement of scientific knowledge.

From August 9 to August 30, the Okeanos Explorer is conducting a two-part, 22-day expedition in the North Atlantic, beginning and ending in the ship’s home port of North Kingstown, Rhode Island. The first leg, which was completed on August 12, included various shakedown items required because the ship sat for dockside repairs all summer. These included at-sea testing of communications systems, mapping software and hardware updates, EK60 sonar calibration, and an EM302 sonar patch test at the Veatch Canyon. It was interesting to observe these procedures, which ended with scientists and engineers who were only on board for this portion of the cruise heading back to Rhode Island via a small boat transfer in Jamestown Bay.

During the second leg of the expedition, the Okeanos will survey previously unmapped seamounts in the New England Seamount Chain, extending approximately 1,100 km off the continental shelf into the deep North Atlantic. More information about this mission can be found here.

Upon arrival, I didn’t know what to expect from life on a research vessel. Of course there are the workspaces on deck and inside the dry and wet labs, control room, and engine rooms, but it turns out the Okeanos also has most of the comforts of home. Like a 224-foot floating city, it has all the essentials and more, including a laundry room, gym, TV room, library, mini-hospital, and even a small gift shop. The galley (kitchen) is always stocked with snacks and provides the crew with three meals a day. The cabins (bedrooms) are comfortable with heads (bathrooms) shared between adjacent rooms.

It has been important for me to become familiar with ship lingo. Terms like port, starboard, bow, and stern are used in everyday conversations as well as in the descriptions of our designated musters (meeting places) that we report to during weekly safety drills like abandon ship, fire, and man overboard. 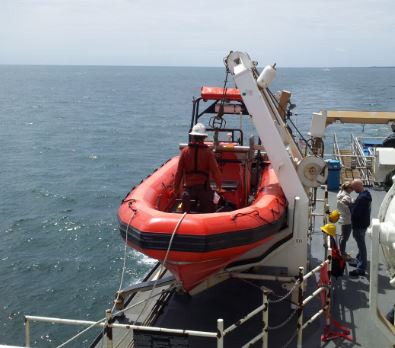 Crew members prepare to conduct a small boat transfer to return part of the science party to shore following the completion of leg 1 on August 12, 2014. Credit: Rachel Husted 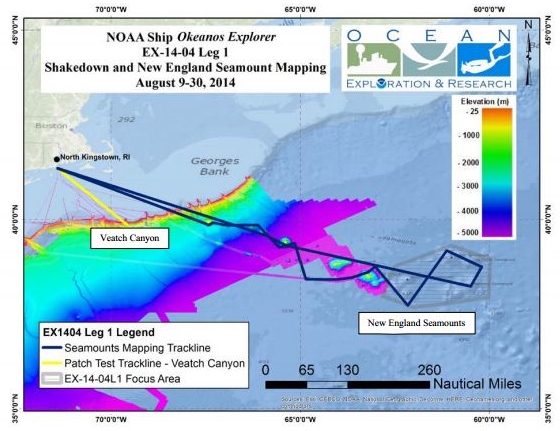 The fantail is the back deck area, just a few feet off the water. From here, most of the equipment is deployed, including the ROV (remotely operated vehicle) which typically accompanies this ship and transmits live video streams of the seafloor. A distinctive 12-foot-wide white ball, the VSAT (Very Small Aperture Terminal) satellite dome provides us with communications abilities, including Wi-Fi access.

Maintenance work is frequent as ships fight a constant battle against rust and corrosion. Seafloor mapping operations take place 24 hours a day. Three teams of three work eight-hour shifts called “watches.” Each team has two interns and a watch lead, all working under the supervision of the Expedition Coordinator.

Including myself, there are six mapping interns on this expedition. Our job is to help process the sonar data and complete individual mapping projects.

I stand the midnight to 8 a.m. watch. My new sleep schedule took some getting used to but it is kind of neat to be awake while much of the ship sleeps. It is especially cool to go up and visit the bridge (command room) at night. It is kept dark so that navigators can better see out over the water. Not to mention that the stars, moon, meteor showers, and sunrises look pretty great out at sea. The only not-so-great thing is seasickness, which I experienced for the first time during my first watch. Fortunately, I’ve felt fine ever since.

Despite all the work being done onboard, there is still time for fun. Friday night movies on the fantail and Sunday sundae socials build a sense of community. Interns post silly “jokes of the day” on the control room whiteboard.

There are also some amusing superstitions. According to some crew members, at the start of every season and when equipment malfunctions during an expedition, a red Haribo gummy bear must be sacrificed off the side to restore smooth operations.

On August 13 we remained at anchor in Jamestown Bay to wait out some bad weather and heavy (10-to-14 foot) seas before heading back out to sea for the second leg of the expedition. I look forward to starting the mapping of the seamount chain.

Read Rachel's second blog post about the process of underwater mapping and her third blog post reflecting on the journey.