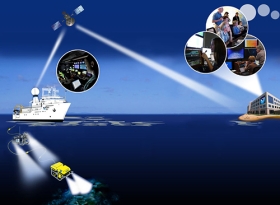 In her third and final dispatch, an undergraduate intern reflects on her experiences on a now-completed NOAA scientific expedition to the North Atlantic.

The Okeanos Explorer is back in port. The ship came in a day early due to concerns about Hurricane Cristobal sending rough waters up the East Coast. We returned after mapping as much of Manning Seamount as possible. Despite the weather-related setbacks, the expedition coordinator has declared the cruise -- officially titled EX-14-04 Leg 1 -- to be successful.

Before reaching port, I finished my work for the expedition. Using ArcGIS, I put together a map project showing the multibeam sonar bathymetry data from the newly surveyed seamounts in addition to the data from previous NOAA expeditions to the New England Seamount Chain. Recent launch locations of XBTs (expendable bathythermographs) are also displayed. I used Fledermaus, a 4-D geospatial analysis software, to take some close-up snapshots of the three main groups of seamounts that we mapped -- Gosnold and Sheldrake; Gregg and San Pablo; and Manning -- to highlight their unique features and estimate their heights.

Now that the expedition has come to an end, I have had time to reflect on the wonder and significance of exploratory missions like this one. The size of these submerged mountains is remarkable. Gregg, at approximately 4,200 meters (13,780 feet), is taller than most peaks in the United States. Rising high in the water column, seamounts create complex current patterns.  Frequently when transiting over a peak, the ship would have to fight against strong currents to stay on the survey line plan. 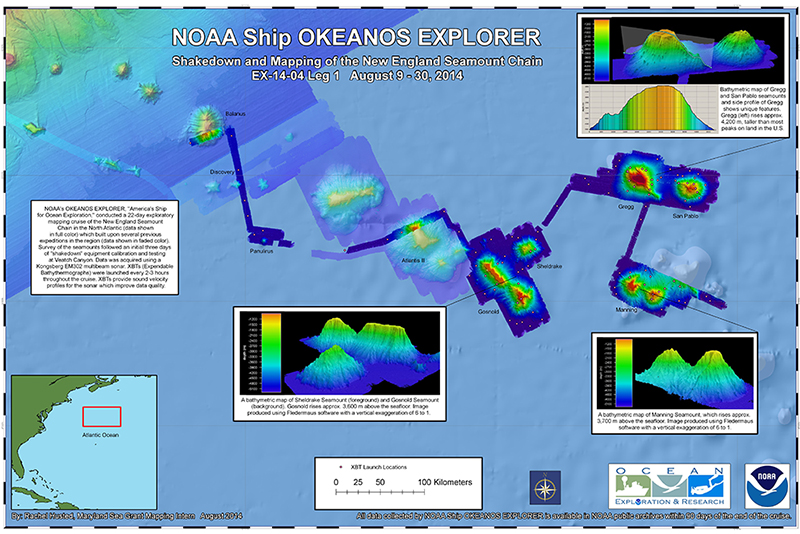 ​My map of the seamounts surveyed in EX-14-04 Leg 1, as well as during previous NOAA cruises to the region. Credit: Rachel Husted 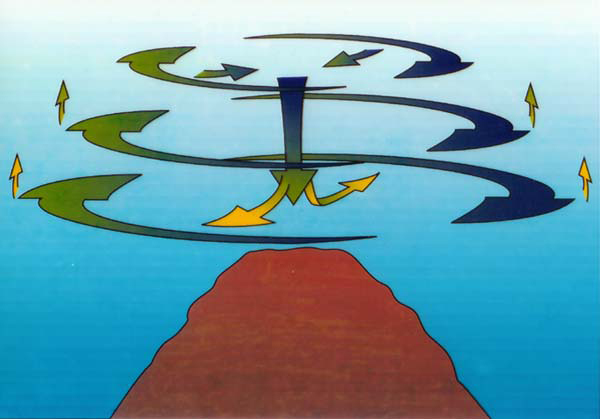 Each seamount also influences the surrounding biology. Studies have shown that seamounts function as “oases of life,” with higher biodiversity and biomass found on and in the waters around them than on the surrounding seafloor. Seamounts provide rocky substrate material where many species can settle and grow. And because seamounts are often isolated, they are thought to be a haven for endemic species.

The findings from EX-14-04 L1 will improve scientific understanding of the geology and biology of the New England Seamount Chain, as well as of seamounts in general. All of the data collected will become available in NOAA’s public archives within 60 to 90 days of the cruise’s conclusion. The information is entirely free, and anybody can use it.

It is significant that the Okeanos Explorer is a “telepresence-enabled” platform. This means that the ship, while at sea, can use satellite technology to transmit data and video in real time to shore-based receiving stations and, ultimately, the general public. Telepresence allows for improved communications and more rapid dissemination of new information. It makes the whole process of ocean exploration more efficient.

The Okeanos is also the only NOAA ship to have a dedicated ROV (remotely operated vehicle), which is an unoccupied, highly maneuverable underwater robot operated by crew at the surface. ROVs are attached to long cables and can descend thousands of meters to explore the seafloor firsthand. The ROV transmits a live video feed right up into the ship’s control room and, via satellite, the offices of experts on land as well.

The ROV was not in use for Leg 1 of this expedition, but it will be during Leg 2 when the Okeanos returns to the New England Seamount Chain later this fall. I will be excited when NOAA releases the Leg 2 footage so that I can have a better look at the seamounts that I was helping to survey. If you have any interest in the creatures or geology of the deep sea I would definitely recommend viewing ROV footage highlights.

The unofficial motto of the Okeanos Explorer crew is “Always Exploring.” As much as 95 percent of the ocean still has not been explored. To complete the ship’s mission, to explore the unknown ocean, and to make the data and discoveries accessible as a foundation for further research and improved stewardship are likely going to take a long time. However, the effort is definitely worth it. While exploration for its own sake is valuable, there are also practical applications of this knowledge for many things such as commerce and natural resource management (like mining, fisheries, and laying deep-sea cable).

From providing high-quality video that leads to the identification of previously unobserved species to enhancing K-12 school curriculums, NOAA’s Okeanos Explorer provides a unique service to the country, and I think it is really cool. I met wonderful people, learned a lot, and got so much out of my experience as a mapping intern on this ship. I am very grateful to Maryland Sea Grant and NOAA for giving me this opportunity. Thank you for reading and I hope that you never stop exploring.

Read Rachel's first blog post about this mapping expedition, which describes life aboard the Okeanos, and her second post, about the process of underwater mapping.