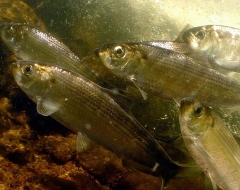 A lot of plants, animals, and other critters call the Chesapeake Bay watershed home–maybe even you! Some organisms spend their entire lives in the Bay while others travel in and out of the Bay at different points in their life cycles. The river herring are the latter, travelers. While their name may lead you to believe they are river dwellers, these fish actually spend most of their lives at sea. Similar to salmon on the west coast, river herring on the east coast make an annual migration into the Chesapeake Bay and other similar coastal bays to spawn, or reproduce. They make this journey to the streams and rivers where they were born so their young can grow in the safety provided by the topography of the rivers and estuary.

Why are river herring important?

River herring are considered prey fish, as they’re a source of food for larger fish and terrestrial species like seabirds and coastal mammals, including humans. For thousands of years indigenous tribes have relied on the river herring migration inland and many continue to hunt river herring today for its cultural importance. Early European colonists also came to rely on these fish for food and fertilizer. All along the eastern seaboard people from all backgrounds still celebrate the annual river herring migration inland with festivals and spawning look-outs. While their current populations are nowhere near the historic sizes documented in the early 20th century, these fish still serve important roles in the ecosystems they encounter throughout their life cycle. The eggs hatch in freshwater and as they grow into juveniles they eat zooplankton, insects, and small invertebrates and migrate down to the estuary. As adults, they move offshore to deeper water where they spend most of their life. After a few years when the adults reach maturity and the water warms in the spring, the mature adults migrate into freshwater to spawn where they face a gauntlet of obstacles and predators like coastal bird species. Their dwindling numbers make it more difficult for them to fully support these ecosystems like they once did. Further collapse of these fish populations would have cascading effects that impact all of the critters that rely on them, including you!

How do we monitor river herring in the Chesapeake Bay region?

This is why it’s important to monitor these fish: we need to understand their populations as they are to decide the best course of action to prevent further collapse and even restore their populations to their historic levels. But how do you monitor a fish that spends so much of its life moving? It’s like trying to take a picture of a moving target–how do you know when you take the picture, the target will be in the frame? One solution would be to use a wider lens, or take more pictures but these both cost time and money.

In our case, getting a picture of our river herring populations in Maryland can utilize a variety of tools, the most common of them being electrofishing. Electrofishing is when you use a device that emits an electric field to temporarily stun the fish nearby. Scientists then collect the fish with a net and can gather information on them like species, age, and abundance. While this is a great way to understand these fish populations, this process is invasive for the fish and can require a lot of time and money to implement. There are many new technologies in development that can provide us with information on these populations in a way that is less invasive to the fish and requires less resources from management agencies to implement.

One technique for monitoring these populations uses DNA found in the environment, called eDNA. This technology is based on the understanding that fish shed DNA into the environments they live in. Fish shed DNA in the form of scales, mucus, waste products, and genetic material from reproduction. We can examine this eDNA by simply sampling the water and using molecular techniques to identify our target species eDNA in the samples.

What does eDNA monitoring look like in the field?

If you are an outdoorsy person, you might come across our sampling equipment on one of your adventures! We use a remote autosampler to collect daily water samples from rivers across the Chesapeake Bay watershed. This autosampler uses a hose and strainer deposited in the river to draw daily water samples. When the autosampler is active the program rinses the line out three times to ensure the sample collected isn’t contaminated with water that was sitting in the line between sampling events. Once the rinse cycles are finished, the autosampler collects three water samples that are deposited into bottles that sit in the base of the machine. eDNA degrades very quickly in the environment so each bottle contains a preservative to reduce the amount of decay taking place between sample collection and processing in the lab. Samples are taken daily but only processed in the lab once a week.

We can use highly sensitive molecular tools to test our samples for river herring eDNA and determine if the fish were in that particular stretch of river on a given day. This type of work has been carried out all over the Chesapeake Bay watershed. My research is focused on taking these results a step further and investigating if the amount of eDNA in the water can be used to predict the number of fish in the water. Developing a robust answer to this question is part of my on-going research but once complete it could help us better understand how eDNA data aligns (or doesn’t align) with fish count data. If eDNA can provide robust estimates on fish count based on the amount of eDNA in the water, this could reduce the effort required for continuous monitoring of these species. We would still need electrofishing and other fish sampling methodologies to confirm our eDNA data and provide us with other information like size, age, and sex. Currently, this type of information cannot be extracted from eDNA but the research described here is just one of the many projects taking place all over the world to advance this tool and other non-invasive methods like it!

Learn more about this student: /fellows/2020/chelsea-fowler