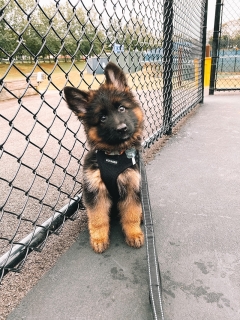 Like many others, I found this window of being home pretty much constantly would be a great time to raise a puppy. My boyfriend was also excited and on board with the prospect that we could have a well-trained and loving puppy hanging out with us. He was also working from home, so it was a no brainer that the timing was right. We were both talking about her before she was born. We intended to name her Nova and we would talk about her like she was already here.

Unlike many who adopted “COVID puppies” during this long stretch of being homebound, I had been planning to adopt a dog for months–actually, years–before getting her. It was one of my goals for 2020. I just wasn’t able to have one when I was younger and I craved the bond that people always told me they had with their dogs. I also chose it as one of my goals for 2020 because I found myself going year after year wanting a companion, but never figuring out if my dream was a possibility. Although it wasn’t one of my boyfriend’s top priorities, he still wanted a pup almost as much as I did. Through college, the house he lived at had a dog. It was something he and I both missed after graduation.

Even with lots of planning, getting our puppy wasn’t a total walk in the park. Initially, the litter that Nova was supposed to be a part of was going to be due in November of 2020. The timing could not have been more perfect. My boyfriend and I would have been settled into our place for a few months and I would have started graduate school. In late July, I found out that the litter was not happening. The mom wasn’t able to get pregnant. While these things just happen sometimes, we were devastated.

Amazingly enough, one of the breeder’s good friends happened to have a litter around the time she gave us the news. While this was not how we planned and felt weird moving to another breeder so suddenly, the timing was right and the other breeder had extremely loved and healthy dogs. She put us in contact with her friend and we found out the puppies would be ready in September. This meant that instead of 4 months, we had a little more than a month until we had a puppy. September rolled around and my boyfriend and I took the drive to North Carolina to pick up an 8-week old long-haired German shepherd puppy. Wearing our masks, we arrived at their farm where they opened the barn gates and a 10-pound puppy came bounding out towards us. My head was bursting with happiness and I don’t think I stopped smiling for days.

Another goal was to begin graduate school. You can imagine those are each highly time-consuming goals, but I was able to start school in August of 2020 and get my sweet puppy in September. Raising this beautiful fluff ball during my first semester as a master’s student challenged my time-management skills.

Almost every hour, she required playtime, training time, and her favorite: nap time. Putting it like that, it seems like she took up every hour of my day and she kind of did. Crazy enough, her puppy schedule lined up with mine (almost) perfectly. She would nap while I had classes or play by herself when I had work to do. Unsurprisingly, there were times where I would be on a Zoom call and all she wanted to do was play. It had the potential to be disrupting, but I always had a plan. That was the key. Planning ahead and predicting the potential chaos of the day allowed me to be successful.

My first semester of grad school was unlike any other. Not only had I never taken an online class, but I had to find focus and motivation that I hadn’t channeled before. I never thought about how much easier it was to focus and put my 100% effort into class when I was in a room surrounded by others doing the same thing. Now, instead of classmates, I have a puppy. Unfortunately, they are not similar in the least. (Maybe that’s a good thing.)

On the other hand, finding that work-life balance was just as difficult because there was no separation of work and home. Planning for the puppy made all the difference when it came to managing my time and finding my balance. (Her love of sleeping also helped!)
As a grad student and a full time puppy “mom,” I learned that when you’re short on time, you have to make time and complete work at weird hours. I find myself up doing work at 6:30 a.m. before the puppy is awake or even at 10:00 p.m. after she is in her crate for the night. Thankfully, that doesn’t happen often, but it’s what I have to do to manage my time and complete my work sometimes. The biggest advantage of my busy schedule is that having the puppy puts me on a strict routine. This is actually a positive because it allows me to know exactly what times I should be working, taking care of the puppy, or taking a break.

Though I miss going to a physical building and the interactions among colleagues, there is something to appreciate from the opportunity to work from home and be able to raise a puppy. Coming from an athletic background, sports had guided much of my time management and planning. It provided some type of routine that made it much easier to complete my work and manage day-to-day tasks. I believe my puppy has replaced that part of my life in a way. Whether from sports or a puppy, I have found that the best way to manage my own time was to have a consistent schedule.

Achieving one of my biggest personal goals of my life has been greatly rewarding and significantly helped my mental state through a pandemic as well as my first semester of grad school. It is crucial to have personal goals along with educational or professional goals. Managing these goals can be tricky, but at least for me, a consistent routine has made all the difference.

Learn more about this student: /fellows/2020/samantha-schiano