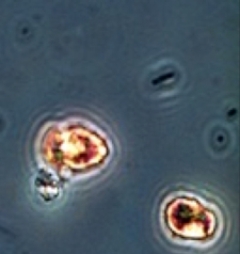 Meet Heterocapsa rotundata, a species of phytoplankton that is about 10 micrometers in length.

While this organism might not look that impressive at first glance, to me this is the most important organism in the Chesapeake Bay and could impact striped bass abundance.

Winter is H. rotundata’s time to shine. When temperatures drop to their lowest all year, this species of phytoplankton (plankton that photosynthesize) can reach high densities, greater than 20,000 cells per milliliter. You might think that Bay plankton perform little photosynthesis during the cold, dark winter months. But the presence of dense winter phytoplankton blooms shows otherwise.

While the metabolisms of most organisms in the Bay slow down and their growth rates come almost to a standstill in winter, H. rotundata thrives under these low temperatures with little competition from other phytoplankton. However, very little is known about the frequency of their blooms, or anything surrounding the impacts of those blooms on the ecosystem in the winter, because research scientists and monitoring groups generally do little field work and data collection at this time of year.

Unlike most research scientists, Maryland winters don’t deter my desire to do field work. I am from northern Minnesota, so even the coldest, windiest, and snowiest day in Maryland is quite pleasant by my standards. Since 2011-12, I have set up weekly experiments each winter with water I took from the Choptank River near Horn Point Lab in Cambridge, Maryland. In my three years of sampling I have done the highest resolution sampling for the winter season in the Choptank River. I have shown by how much H. rotundata abundance can vary from year to year as well as within each year.

I have a real interest in the ecology of marine environments, specifically predator-prey interactions. So I set up experiments in the winters of 2011-12, 2012-13 and 2013-14 to make three main observations:

I have found different organisms grazing on H. rotundata. Of all these organisms, I am most interested in a copepod called Eurytemora carolleeae. A copepod is a small crustacean, around 1 millimeter in size, which is also a kind of plankton (and which you might have seen featured as the character “Sheldon J. Plankton” in “SpongeBob SquarePants.”) In fact, I found that E. carolleeae prefers to eat H. rotundata compared to all the other available prey items.

Why does any of this matter? Why should anyone care that there are winter blooms of H. rotundata and that they lead to higher abundance of E. carolleeae? The short answer: the striped bass and its food chain.

Learn more about this student: http://www.mdsg.umd.edu/fellows/2013/nicole-millette