Think of the Chesapeake Bay ecosystem as one big web. That web is made up of countless organisms — including animals like fish and crabs, plants like eelgrass, and smaller organisms like algae. And they're all interacting with each other. Some get eaten. Others do the eating.

The end result of all this interacting is that energy gets passed throughout the ecosystem. In this case, energy means carbon. Or, more particularly, molecules that contain carbon, such as sugars, proteins, and fats. In these interactive diagrams, you can see how organisms are connected through the energy (carbon) they pass along as they eat or are eaten.

Life in the Food Web

Roll your mouse over a trophic level name, species name or species image below to find out more about it.

Energy in the Food Web

This diagram shows a mid-Chesapeake Bay food web (salinity 5-20 parts per thousand). Roll your mouse over the orange polygons below to highlight who eats whom. This chart tracks carbon, the raw material for energy, as metabolism breaks down organic matter. Much of that energy is lost, but carbon is continually recycled. 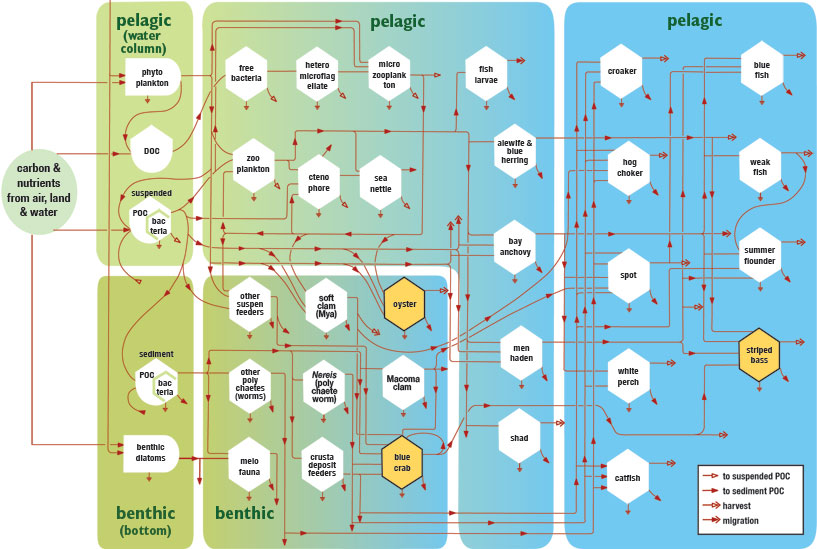 We adapted this energy network from a diagram developed by Robert Ulanowicz, a scientst at the Chesapeake Biological Laboratory, which is part of the University of Maryland Center for Environmental Science. For more on Ulanowicz’s work, see this article, A Scientist for All Seasons.

Steps in the Food Web

Each step in the Bay's food web is unique — and also plays an important role in the ecosystem. Here, we trace those steps from the bottom of the web to the top. That means us.

Organisms in the lower food web are usually small — in fact, most are so small they can't be seen with the naked eye. But that doesn't mean they're not important. These organisms produce the building blocks of all Bay life. 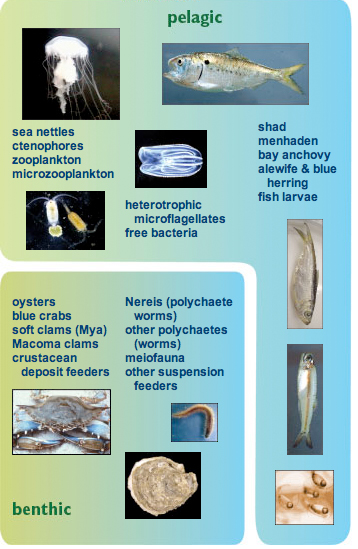 The Bay's middle food web includes small animals, such as worms or jellyfish. But also many fish species like menhaden. Think of these organisms like a bridge — they take the energy produced by the lower food web and make it available to the top food web.

Some of the jobs done by the middle food web include:

The top food web is where all of the energy that flows through the Chesapeake ecosystem stops (before being recycled). Here's how:

How Do Food Webs Work? 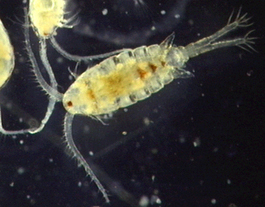 A microscopic view of calanoid copepods, a type of zooplankton, in a water sample from Baltimore's Inner Harbor.

It all begins when small photosynthesizing organisms, called phytoplankton, capture the energy from sunlight and store that energy in carbon molecules. Then, those organisms get consumed by bigger ones, which get eaten by even bigger organisms. And so on up to large animals like striped bass or crabs — even people.

Without a stable food web, much of the Bay ecosystem would collapse. Here are some challenges facing this complex network:

These challenges are important to the health of the Bay. But they're also important for many people who depend on the Bay and its watershed for food, clean water, and recreation.