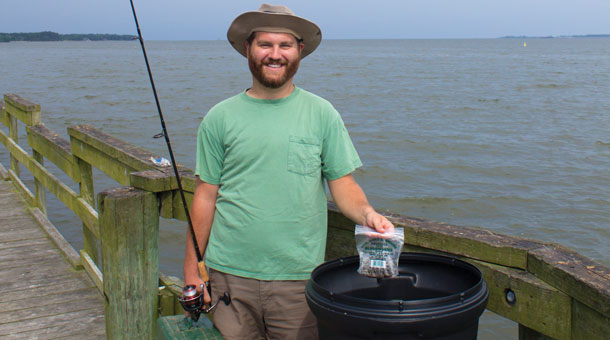 The Problem: Anglers in the Mid-Atlantic often use live baitworms packed in seaweed. But this poses a threat to the environment – the seaweed can carry invasive species that don’t belong here.

How You Can Help: Throw away unused worms and seaweed packaging in the garbage. This simple action will help protect fish and preserve the natural habitats where they live.

The Background: A team of university researchers is studying the bait worm industry and is working with bait worm dealers to develop solutions. You can learn more about this effort, and the researchers’ work and findings, on this webpage.

Do you know where your live worms come from? Do you know what other plants and animals might be living in and on the seaweed in which they are packaged? Do you know how to discard your bait and the seaweed so that those organisms don’t invade and harm your fishing waters?

These are the subjects of this research project being conducted by university-based, state Sea Grant programs from North Carolina to New Jersey in collaboration with researchers at the Smithsonian Environmental Research Center, the University of Maryland at College Park, and the University of Wisconsin at Madison.

Specifically, we are studying the bloodworm industry, which ships millions of worms per year from Maine to the Mid-Atlantic and other places around the world for use by anglers. The worms are shipped packed in seaweed, which carries many potentially invasive organisms.

Our goal is to understand the risks posed by the transportation and disposal of these live worms and their seaweed packing material and to explore alternative methods of packing (i.e., alternative packing materials or washing the seaweed) in order to prevent the spread of potentially invasive species "hitchhiking" along this trade distribution pathway or "vector."

Anglers can help keep invasive species out of our waters by throwing away unused worms and seaweed packaging in the garbage.

Rather than focusing on specific individual species that pose threats to the environment, our 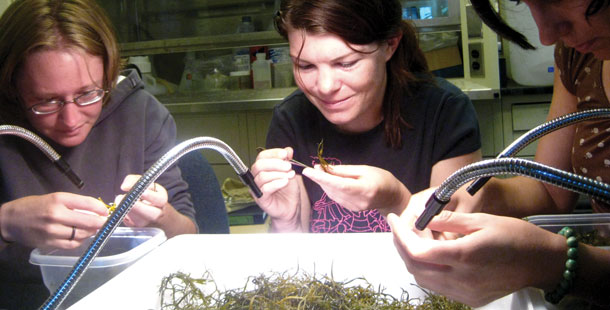 research focuses on managing potential pathways or vectors that carry numerous species, any of which may be introduced. Managing many species collectively by preventing introductions from occurring in the first place is more cost effective and protective of the environment than trying to remove a species after it invades our waters. We chose to focus on the live bloodworm trade vector in particular because it lends itself to a “cradle to grave” analysis that enables scientists to understand which and how many hitchhiking organisms are being transferred from the source (Maine) to the recipient region, in this case, the Mid-Atlantic. What we learn about this vector can help prevent the introduction of invasive species by this and other similar pathways.

In our research, we had three goals:

The biological team consisted of researchers from the Smithsonian Environmental Research Center (SERC) who conducted a detailed analysis of the organisms that live in this seaweed, which is used to pack and ship bloodworms from Maine.

The seaweed is a type of algae with the scientific name Ascophyllumm nodosum, also known as "wormweed." The alga commonly grows in shallow coastal areas in Maine. The researchers wanted to know how many species 1) live with the seaweed naturally, 2) of these, how many get packaged with bloodworms and sent on to the Mid-Atlantic and other locations, and 3) how many hitchhikers survive the trip and can be introduced to and possibly invade Mid-Atlantic waters if the wormweed packing material is thrown into the water.

In addition to surveying the organisms present in the seaweed packing material all along the vector (from source to destination), the researchers conducted a series of experiments to investigate whether certain handling techniques were effective for removing or killing hitchhiking organisms. Seaweed was soaked in baths of water of different salinities (e.g., fresh water, high salinity). By rapidly changing the salinity of the water, many of the hitchhikers would undergo osmotic shock that would weaken or kill them. Since the seaweed is very hardy and able to live across a wide range of salinity, it would not be harmed by the treatment and would continue to function well as a packing material for the worms. This approach, if effective, could serve as a low-cost management technique that would not put wormweed harvesters in Maine out of work.  Alternatively, other packing materials, such as moist newsprint paper, are being used by some more environmentally minded baitworm distributors.

Working alongside the biological team was a team of social scientists from the University of Maryland who were interested in how the bloodworm industry is structured and has developed. The social scientists were also interested in people’s beliefs and values about the worms, seaweed, and invasive species and how these views might influence how people would respond to changes in shipping methods. The researchers conducted interviews with people in the industry – worm and seaweed harvesters, dealers, bait store staff and owners, etc. – and surveyed thousands of anglers in the Mid-Atlantic region. Their goal was to find the best way to work with the industry and consumers to make necessary changes that would prevent the introduction of invasive species through this vector, while taking into consideration economic and livelihood factors for participants in this industry.

An Inter-disciplinary Approach to Building Awareness

Important to this study was our recognition of the importance of the live bloodworm bait industry for both the people of Maine and for the many anglers who fish in Mid-Atlantic waters and beyond. The findings from this research are intended to inform the industry and anglers about this vector and to contribute to their responsible stewardship of the aquatic systems they care about.

Combining the biological and the social science approaches to the project, the researchers identified possible approaches to reduce the transmission of invasive species from Maine to the Mid-Atlantic along this vector. In Maine, at the beginning of the supply chain, researchers from SERC, the University of Maryland, and the University of Wisconsin talked with people in the industry to understand whether and how the seaweed washing methods studied by the biologists might be adopted by the baitworm dealers. The researchers also looked into alternative packing materials that would serve the same function as the seaweed – keeping the worms in peak health for the long trip from Maine to the Mid-Atlantic – without carrying potentially invasive species. Improving education about aquatic invasive species and changing practices at this level are long-term goals, but with continued interest from the researchers and an ongoing engagement with the industry, these changes could substantially reduce the risk of transmitting invasive species by this vector.

At the other end of the supply chain, the researchers are working with anglers and bait stores in the Mid-Atlantic region to get out the word about the risk posed by this vector. Using information gathered from the biological and social science research, Sea Grant Extension agents and researchers from Maryland and Wisconsin are developing a social marketing campaign. This effort would inform anglers about the threat of invasive species and instruct them on how to properly dispose of worms and seaweed. The research shows that many anglers already discard their seaweed and unused worms in the garbage rather than in the water. The vast majority are concerned about the threat of invasive species and are willing to throw unused worms and seaweed in the garbage. However, few are aware of the invasive threat posed by this bloodworm-seaweed vector, so getting out the word would go a long way toward decreasing the risk of invasion. Bait stores play an important role in this process. As experts and opinion leaders in the world of fishing, they can contribute substantially to informing their customers about the issues and instructing them on proper disposal of worms and seaweed.

More About Vectors and Vector Management

What Is a Vector?

Invasive organisms need some way to get from one place to another. In the past, the only mode of transportation was natural – for example, walking, swimming, or flying to new places or being carried by rivers, ocean currents, or storm events. However, with increased human population growth, movement, and commerce, new forms of human transportation have enabled other organisms to “hitch hike” from one place to another. Add to this the increase in trade between different countries and the development of new methods for keeping perishable goods from spoiling, and the opportunities for organisms to be introduced outside their native ranges to new regions where they might become invasive are increasing. These pathways are known as vectors, and a single vector may be capable of spreading many different kinds of organisms to many different places.

Why Is Vector Management Important?

The typical approach to managing invasive species is to focus on an individual species that have already invaded or is known to pose an invasive threat to a particular area. Because this is a reactive approach that is operating on a species by species basis, it tends to be less effective than taking a more proactive approach which instead focuses on the operation of the vector itself. By controlling how vectors operate (i.e., reducing their potential to move organisms) the

transport of vast numbers of potential invaders can be prevented. An added benefit to managing the vector rather than individual species at the point of invasion is that it can translate into protection for all potential destinations. An ounce of prevention is worth a pound of cure.

You can help spread the word: keep invasive species out of our waters by throwing away unused worms and seaweed packaging in the garbage. These informational publications describe this message. Print and share them to spread the word.

Marine Bait Worms as a Potential Vector of Non-Native Species, Connecticut Sea Grant and the University of Connecticut

For More Information About This Project