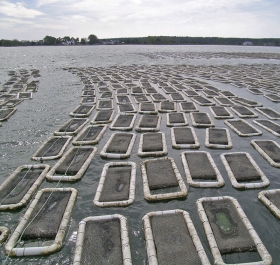 Every animal poops — even oysters. And when thousands of oysters are farmed in acres of floating cages in shallow water, organic wastes that collect on the sand and mud below can trigger chemical changes that are potentially harmful to plants and animals that live on the bottom.

According to a new case study of the Marinetics oyster farm on the Chesapeake Bay's Choptank River, the key to avoiding environmental problems is location, location, location. Field measurements and computer modeling showed that tides and wind-driven waves can vigorously flush wastes away, keeping them from building up nearby. As a result, "the organic matter from the farm poses little or no threat to the health of the ecosystem," says Jeremy Testa, a scientist with the University of Maryland Center for Environmental Science (UMCES) who led the computer modeling portion of the project.

The study, published recently in the journal Aquaculture Environment Interactions, is the most comprehensive look to date of the local impact of floating oyster farming on the Bay bottom. Testa worked on the study with scientists from UMCES, the University of Maine, and Maine Shellfish R & D an aquaculture consulting company in Damariscotta, Maine. The work was funded by the NOAA Sea Grant Aquaculture Research Program and the National Science Foundation.

When oysters feed on plankton and other organic matter already in the water, they excrete feces as well as "pseudofeces" (little clumps of material they can’t eat).  Under certain conditions, organic material produced by farmed oysters can disturb the chemistry of the bottom. "In isolated, poorly flushed regions of the Chesapeake," says Testa, "organic matter has accumulated in the sediments, leading to the accumulation of [the chemical] sulfide, which is toxic to many organisms that live in the sediment and water column."

The study examined how oyster wastes and other organic material move through the water and — more importantly — how much ends up in bottom sediments. To ground the model in reality, the scientists took some measurements at Marinetics. The floating oyster aquaculture operation in Cambridge is spread over four acres and grows oysters in up to 5,000 cage-like floats. The surrounding waters are pretty shallow, ranging from about two to six feet deep.

On four dates in 2011 from April to September, the scientists set out underwater traps made from PVC tubing to catch sediment drifting in the water. They put one trap hanging right under the oyster floats, another on the bottom under the oyster floats, another nearby the floats (about 1,150 feet away), and a fourth "reference" trap a half-mile away, where it was unlikely to capture anything from the farm.

The trapped sediments included fine particles already drifting in the water as well as a mix of natural sediments and oyster wastes stirred up off the bottom by water currents. The trap suspended under the floats mainly captured organic material raining down from the oysters.

The scientists also collected samples of bottom sediment — mostly sand and mud — at the same three sites for lab tests. The measurements and lab test results were fed into the computer model, which then calculated the total amount of oyster wastes that worked their way into the bottom sediments and what chemical changes they caused.

The model showed that the concentration of organic sediment collecting on the bottom at the distant reference site was three to four times smaller than under the floats.

The model also found that only three to five percent of the sediment caught in the traps eventually made it into the mud and sand at the bottom. The rest got flushed away. The study did document a variety of chemical changes in the bottom sediments, but nothing off the charts or substantially harmful.

So the environmental impact of oyster aquaculture depends not just on how much oysters poop, but where they do it. In the case of the Marinetics farm, the effects of tides and wind-blown waves keep the nearby waters well flushed.

But not all oyster farmers may be so fortunate. Testa thinks that a future version of the model, drawing on a handful of sediment measurements, could provide a way to identify such "optimally flushed locations" and help shellfish farmers to make good choices.