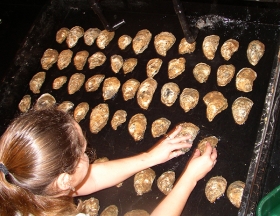 Oysters living within the cozy confines of a hatchery here in Maryland wouldn’t ordinarily get in the mood on Valentine’s Day. It’s cold outside, and bivalves like summer loving.

That’s where Stephanie Alexander and her team come in. For close to 20 years, Alexander has been getting oysters in the mood for love by convincing them it’s really summertime. No candles or romantic music. Turning up the heat means exactly that: moving the thermostat slowly to 20 degrees Celsius, or 68 degrees Fahrenheit.

Most years, that does the trick. Alexander is director of University of Maryland Center for Environmental Science’s Horn Point Oyster Hatchery. Every February, she and her staff take mature oysters from various tributaries—brood stock, or parent oysters—and condition them in tanks for 8 to 12 weeks, slowly turning up the temperature. They then shuck one oyster and check its reproductive organs; if one is ready, the rest are likely at the same stage. When a female oyster is ripe for spawning, the gametes begin to flow out. The more they flow, the riper they are. When they’re ready, Alexander takes oysters from their tanks and places them on a spawning table with some water covering them. The oysters look like cookies on a sheet before they’re put in an oven. 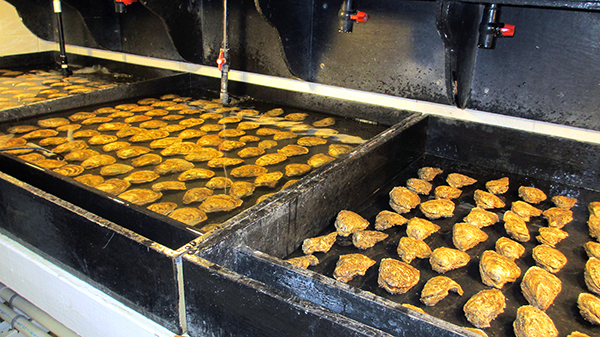 This is the room where it happens. Stephanie Alexander and her team set oysters on a spawning table. Photo credit: UMCES Horn Point Oyster Hatchery staff

Oysters present both male and female characteristics. But once they enter a spawning season, each has usually picked a gender and committed to it, Alexander said. Females are usually larger, but she can’t tell for sure which is which until the spawn begins.

“The male oyster releases its sperm from the right side of the shell, like milk. We will put it under the microscope, and we will see sperm moving like crazy,” she said.

“She will open up, and she claps down, and she pulses out eggs that are ready to be released,” Alexander explained. “The females have to be coaxed a little bit more. Male oysters are always ready.”

Horn Point scientists sometimes video the spawn. Here, the male is on the right, releasing a steady stream of sperm. The female then releases her eggs in slow pulses that look like claps - the first one can be seen at eight seconds in. Video credit: UMCES Horn Point Oyster Hatchery staff

On the spawning table, Alexander says, the atmosphere becomes a “free for all.” It only takes one male oyster releasing its gonad into the water column for the other ones to get the hint. The current will take some of that sperm to the oysters close by, and they will filter it in just as they take in food. As they detect the presence of sperm in the water, those oysters will release their gonads.

Only when they spawn can hatchery staff sex the oysters and sort males and females into different tubs. They then add a specific amount of sperm to tubs where the females are releasing eggs. This is done to ensure eggs do not become over-fertilized, a phenomenon known as polyspermy, which can kill the eggs. In the tub, the sperm and eggs meet. The team then counts the resulting fertilized eggs under a microscope. 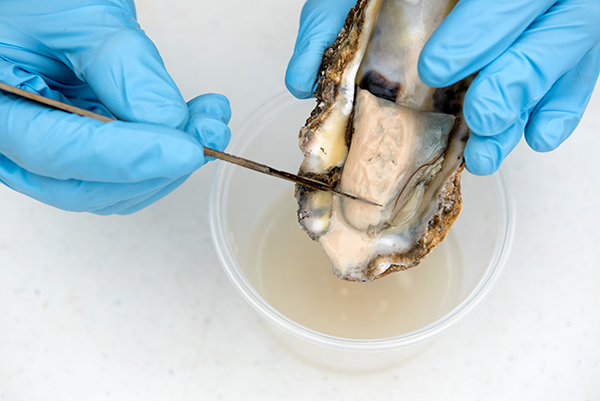 After fertilization, the eggs develop into free-floating larvae, and they are hungry. Alexander and her team fix up a special blend of algae and feed it to these larval oysters six times a day.

After about three days, the larvae morph into a “D” shape. Then, Alexander says, she can relax a little. The spawn worked. Two weeks after that transformation they develop a black dot, or eye-spot—an indication that they’re ready to settle onto a shell. They are spat now. They must attach to a surface in order to grow and survive. A secure spot for spat to settle is an older oyster shell and many spat will often set on the same shell. In this manner, oysters build reefs—communities where they live together and provide habitat for other organisms while also filtering the waters. Shortly after the spat stage, Horn Point’s restoration partners will pick up some of these young oysters and place them on a designated site in Chesapeake Bay tributaries. 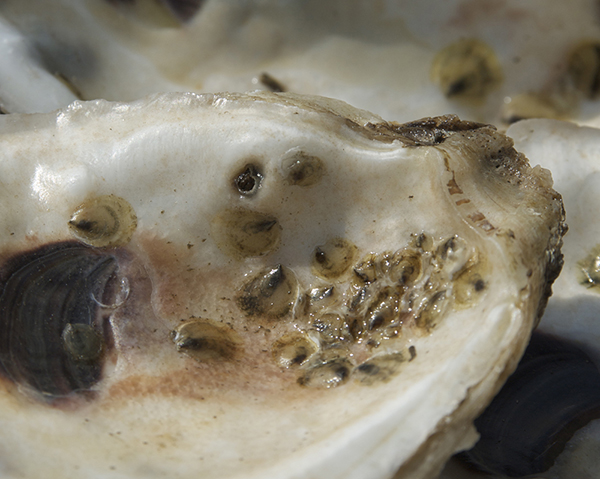 There are times that you don’t want the oysters to spawn—such as when Alexander brings in broodstock and doesn’t have room for more juvenile oysters in her tanks. When she first moved into the new hatchery building about a decade ago, she said, they struggled to get the temperature just right in the conditioning lab. The oysters will spawn when she didn’t want them to and nothing would stop them from finishing. She has solved this issue by keeping oysters cold until it’s time to condition them for breeding.

Sorting out these complexities has helped Horn Point get the spawn down to a science—the hatchery has been able to produce more than a billion oysters some years. But last year was not among the good years. Alexander tried everything to coax her oysters to spawn, but the salinities were so low from heavy rainfall early in the season that nothing worked until dry weather helped bring the levels back up. The oysters were stressed, Alexander said, and they were not spawning on the schedule she’d created.

This year is looking better, with salinities at 13 parts per thousand instead of 5 parts per thousand last year. For 2020, Alexander even decided to get it going a little early, mindful that last year’s crop didn’t materialize until late in the season.

“We’re always on our toes, here,” she said. “We try to control it to the best of our ability. But Mother Nature is still in charge of everything.”

This project has demonstrated the effectiveness of environmentally benign methods for biofouling control. There are many methods of biofouling control which have been suggested, with varying degrees of effectiveness and commercial applicability. Some may be highly species-specific, while others may target a range of species. In order for a biofouling management technique to be widely adopted, it must have the potential to be applied commercially without adding unreasonable labor demands, and it must be effective in controlling biofouling with disrupting the crop of interest, the oysters.