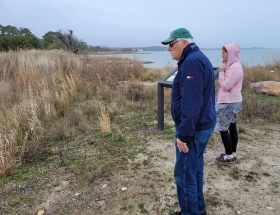 “Got your boots?” Roman Jesien, lead scientist at the Maryland Coastal Bays Program (MCBP), greeted my colleague, Cayla, and I. Cayla Cothron, a climate resilience extension associate at North Carolina Sea Grant, and I had just finished the Mid-Atlantic Sea Grant Regional Meeting in Ocean City, Maryland. We were excited to add on a field trip with MCBP to learn about coastal resilience issues in the area and MCBP’s restoration activities.

We shook our heads and replied, “No sorry, we don’t have other shoes.” Almost immediately another MCBP staff member poked her head around the corner and offered her boots. To me, this initial five-minute exchange embodied the MCBP philosophy: you’ll work hard and get dirty, but our team supports one another to achieve our mission. One of 28 National Estuary Programs, that mission is to restore and protect estuaries of national significance. In this case, 175 square miles of Maryland’s coastal plain, full of numerous rare and threatened plant and animal species, such as migratory shorebirds, waterfowl, recreational finfish, and shellfish.

With boots on, we toured three local restoration projects all within a fifteen-minute drive of MCBP headquarters in Berlin, Maryland.

First, we saw a series of interlocking rafts, which would be floated in the Maryland Coastal Bays to provide nesting habitat for shorebirds. The marshes and shoreline in the area have taken a beating due to sea level rise and the associated erosion, significantly reducing suitable nesting habitat. MCBP first launched one of these rafts last year, covered with clam shell, as an experimental effort to provide potential nesting sites. They were pleased to see Common Terns utilizing the raft with a total of 22 pairs rearing chicks. This year they’ve doubled the size of the platform  with hopes that more shorebirds will take advantage. MCBP’s ultimate goal however is to restore nesting islands within the bays  to provide more permanent habitat.

Next, we visited a bayside project at the foot of the bridge that leads to Assateague State Park and Assateague Island National Seashore, where an innovative scallop design is protecting the shoreline. A series of fortified sand and gravel “headlands” absorb wave energy to protect the marsh and shoreline further inland. This design has not only protected habitat, but it has also provided more access to the waterfront for visitors who enjoy kayaking and fishing in Sinepuxent Bay. Educators use the area to give students and visitors an up close view of the organisms that live in the coastal waters. Just a few yards inland a sandy patch was installed as a nesting site for diamondback terrapins. This will be the first season to see if any terrapins utilize the site.

Finally, we went inland to the hamlet of Bishopville, where MCBP modified a dam so that anadromous fish could access upstream habitat yet maintain the water level in an old millpond. This was an innovative project and ongoing learning experience. Bishopville and the millpond had a long history going back to just after the Civil War. Jesien described the sediment in the creek bed as “black mayonnaise”—so soft and squishy that it was a challenge to shovel and manipulate. Luckily, the contractor was well versed in ecosystem restoration and understood MCBP’s desire to let nature lead the design. The series of step pools and shallow riffles that allow fish to move from brackish tidewater to freshwater spawning areas, while still maintaining the millpond, was the first in Maryland.  After seven years of operation, the project remains stable as it allows fish to pass, and is a natural looking feature of the landscape.

As we wrapped up our tour and returned the boots, I was curious how these projects compare to activities in North Carolina.

“North Carolina communities are feeling impacts from extreme weather events and climate change from the mountains to the coast, and projects that focus on natural infrastructure and nature-based solutions are becoming increasingly prioritized as communities look to more holistic strategies to build resilience to these and other challenges,” Cayla said. “There are several examples of living shorelines along the North Carolina coast, and regenerative stormwater conveyance projects are being put into practice across the state with researchers working with partners and communities to study and document the effectiveness and benefits of this relatively new stormwater control technique.”

She added that it was really great to see how these projects are being implemented in coastal Maryland, and hear about the successes and lessons learned so far that could benefit efforts in her state as these types of innovative natural infrastructure projects continue to be explored as an alternative to more conventional practices.

I also asked about upcoming projects and opportunities at MCBP. Jesien said at the start it was hard to know what to prioritize given the diverse restoration needs, but they now have several projects lined up and are primed for when various funding emerges. Sea level rise and increased precipitation will certainly keep the demand up for such projects–habitat restoration, flood control, bioretention for water quality—and while there is plenty we all can do as a society to mitigate and adapt, it’s still reassuring to know the staff at MCBP have their boots on and an extra pair ready to go! 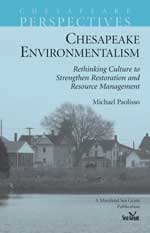