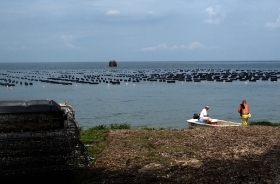 Maryland’s oyster aquaculture harvest so far this year has already exceeded last year’s, despite a deluge of fresh water from storms that scientists and managers worried would stymie growth.

The oyster aquaculture harvest has increased steadily since 2010, when oyster leasing became legal in every county in the state, and the legislature lifted many of the other barriers to farming, such as limits on acreage or the ability to lease to out-of-state corporations. Most Maryland oyster farmers are still homegrown; about half hold crabbing or fishing licenses, and the other half are entrepreneurs from fields such as the law, health care, or management.

Maryland Sea Grant has worked with the Department of Natural Resources to promote oyster aquaculture statewide. Sea Grant extension agent Don Webster presented the aquaculture numbers along with Karl Roscher of DNR and oyster farmer J.D. Blackwell at the University of Maryland’s Agricultural and Environmental Law Conference in Annapolis on Nov. 8. The event, which is an annual conference for the Agriculture Law Education Initiative, brought together attorneys, water-quality specialists, farmers, scientists, and extension agents to talk about issues facing farmers and the rural environment.

The initiative dates back to 2011, when the Maryland Legislature tasked the University System of Maryland with a challenge: to help Maryland families remain in agriculture. That includes dealing with regulatory compliance, land preservation, programs, and access to loans for state programs that can keep farming profitable. The initiative is also looking into aquaculture, as it is expanding in Maryland.

“Our (aquaculture) numbers didn’t increase sharply but they have increased steadily over time, which is what we were hoping to see,” Roscher said.

Bottom leases — where oyster farmers place a bed of clean shell on the bottom, and then spawn oysters and let them set on it — remain the most popular type of lease. In Maryland, there are 339 bottom leases on 6,403 acres. Much of that product ends up shucked. Water column leases — where farmers place the oysters in cages or floats — account for 82 leases on 421 acres. They tend to be the more controversial leases, because floats visible from the shoreline. Floats sit on top, while cages are submerged with only their buoys visible. Leading aquaculture counties include Dorchester, Wicomico, Somerset, and Talbot on the Eastern Shore and St. Mary’s in Southern Maryland. Roscher said demand remains brisk: 137 leases are in progress now.

Sea Grant’s Don Webster has been helping watermen learn the remote-setting technique for raising oysters on a bottom lease. With remote setting, larvae set on a substrate in a tank, sometimes eight or 10 to one shell, and then those shells are transported to a bed of clean shell in the Chesapeake or one of its tributaries. While Webster works on growth, Sea Grant aquaculture specialist Matt Parker helps prospective applicants figure out their business plans. A state agricultural loan fund, MARBIDCO, is available for operations’ seed money.

But while aquaculture has grown as an industry in Maryland, hurdles remain. Roscher is interested in a scientific look at the interaction between submerged aquatic vegetation and oyster leases. If the grasses are discovered on a lease now, Roscher said, the farmer can’t work the lease. That’s a problem, as the grasses appear in the summer, typically a busy time for a farmer.

“If you can’t work your lease all summer, there’s not much you can do with it in the winter,” said Blackwell, who has several leases in St. Mary’s County and has run into issues with grasses.

Maryland has a public protest process that lets members of the public object to a lease. Currently, the law does not require or define “standing” for such an objection. Examples of standing in such a case would be that the objector hunts for waterfowl on adjacent land, or that the floats would obstruct enjoyment of adjacent neighbors’ waterways.

Roscher said he’s interested in a law or policy that would define the criteria under which someone could object. Otherwise, he said, leases can be tied up for six months or longer. DNR spends staff time responding to the complaints and attempting to resolve them — time they could be spending on approving other leases. DNR’s attorneys press the cases forward, using assistant attorney generals, though some applicants also have their own attorneys.

Photo, top left: One of J.D. Blackwell's oyster leases in St. Mary's County, Md. Oysters filter the water and provide habitat, but they can cause friction with neighbors who would rather not see buoys or floats. Credit: Rona Kobell 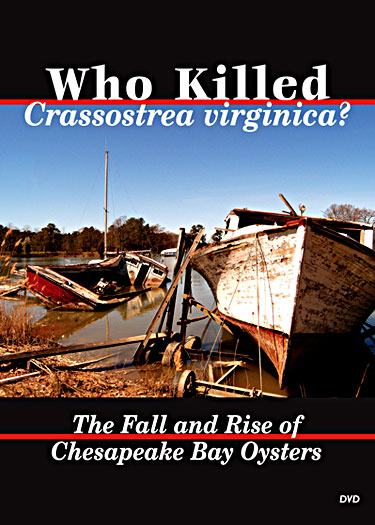 Who Killed Crassostrea virginica : The Fall and Rise of Chesapeake Bay Oysters

The Chesapeake was once home to the richest oyster grounds in the world. The native oyster, Crassostrea virginica, built massive reefs and filtered vast reaches of the Bay, removing algae and sediment. Now…