Prepping for Potting, Praying for Crabs 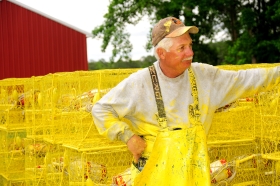 Before a waterman can plunk his crab pots along the bottom of Chesapeake Bay, he’s got to paint them. A lot of watermen use red anti-fouling paint on their pots, but Roger Morris down in Church Creek, Maryland thinks yellow pots catch more crabs down around the southern end of Maryland’s Eastern Shore.

“You think the crab knows the difference?” says Roger Morris. “Well, I do. I’ve had green, I’ve had black. And yellow is it, I think. Once you think you can catch more crabs with something – well that’s it.” 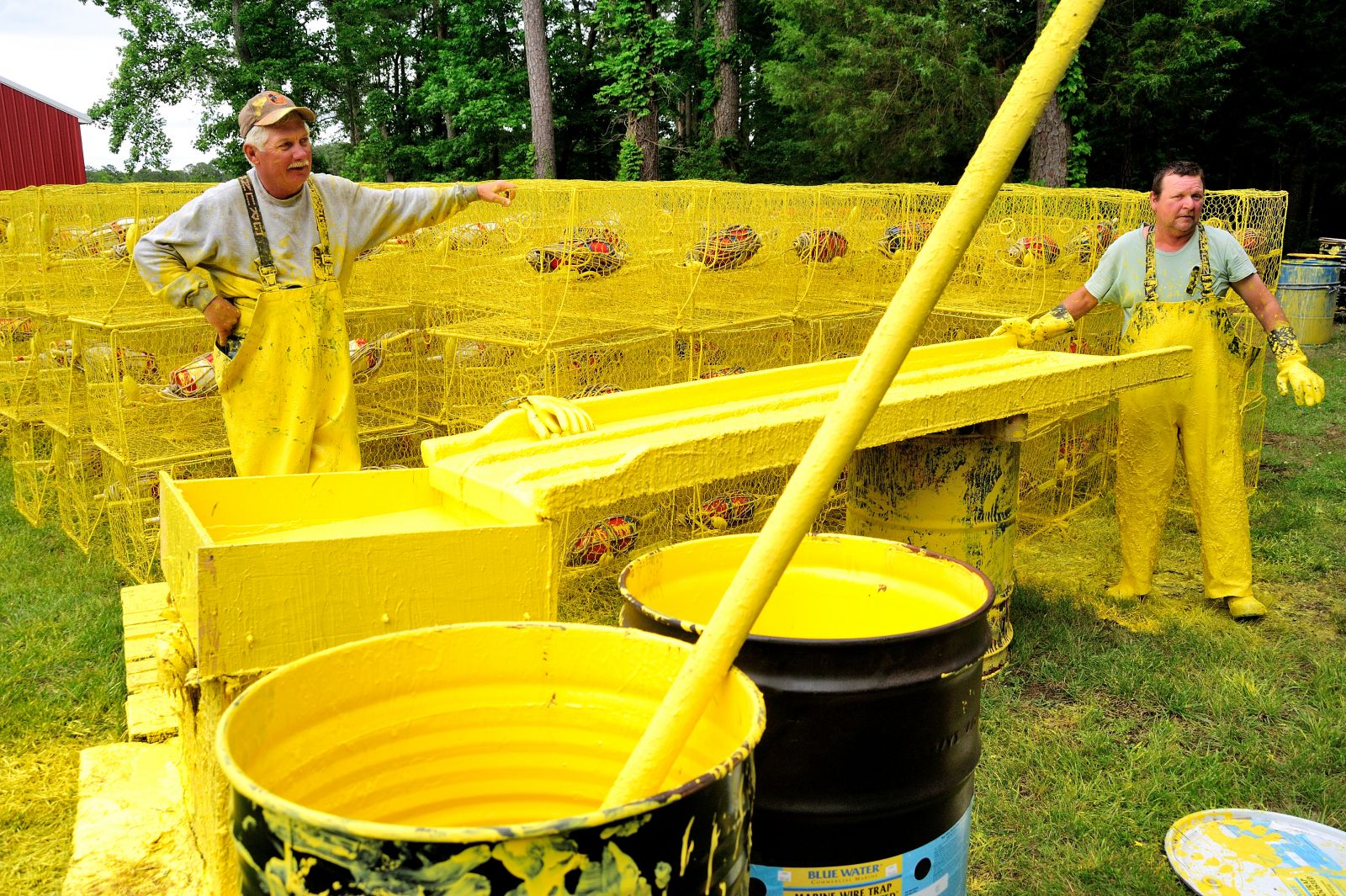 The Set Up:It takes $5,000 worth of paint to prepare 1,000 crab pots. Each pot holds its marker buoy and rope, both of which have to be removed before painting and replaced afterwards.

Morris has spent a lot of his life chasing blue crabs and thinking about the best ways to catch them. The legal options include trotlines, bank traps, grass scrapes, and peeler pots, but watermen in Maryland catch the most crabs with traditional crab pots: wire cages, baited with razor clams or menhaden, dropped along the deeps and shallows of the Bay’s mainstem and its major rivers. All those crab-catching contraptions hauled 24 million pounds of blue crabs out of Maryland waters in 2014, earning more than $53 million in dockside sales.

In years past Morris spent time working Virginia waters with a crab dredge during the winter months, but he does most of his crabbing in Maryland waters where he holds a commercial license allowing 900 crab pots or more. That means he can catch a lot of crabs, but first he’s got to do a lot of painting. 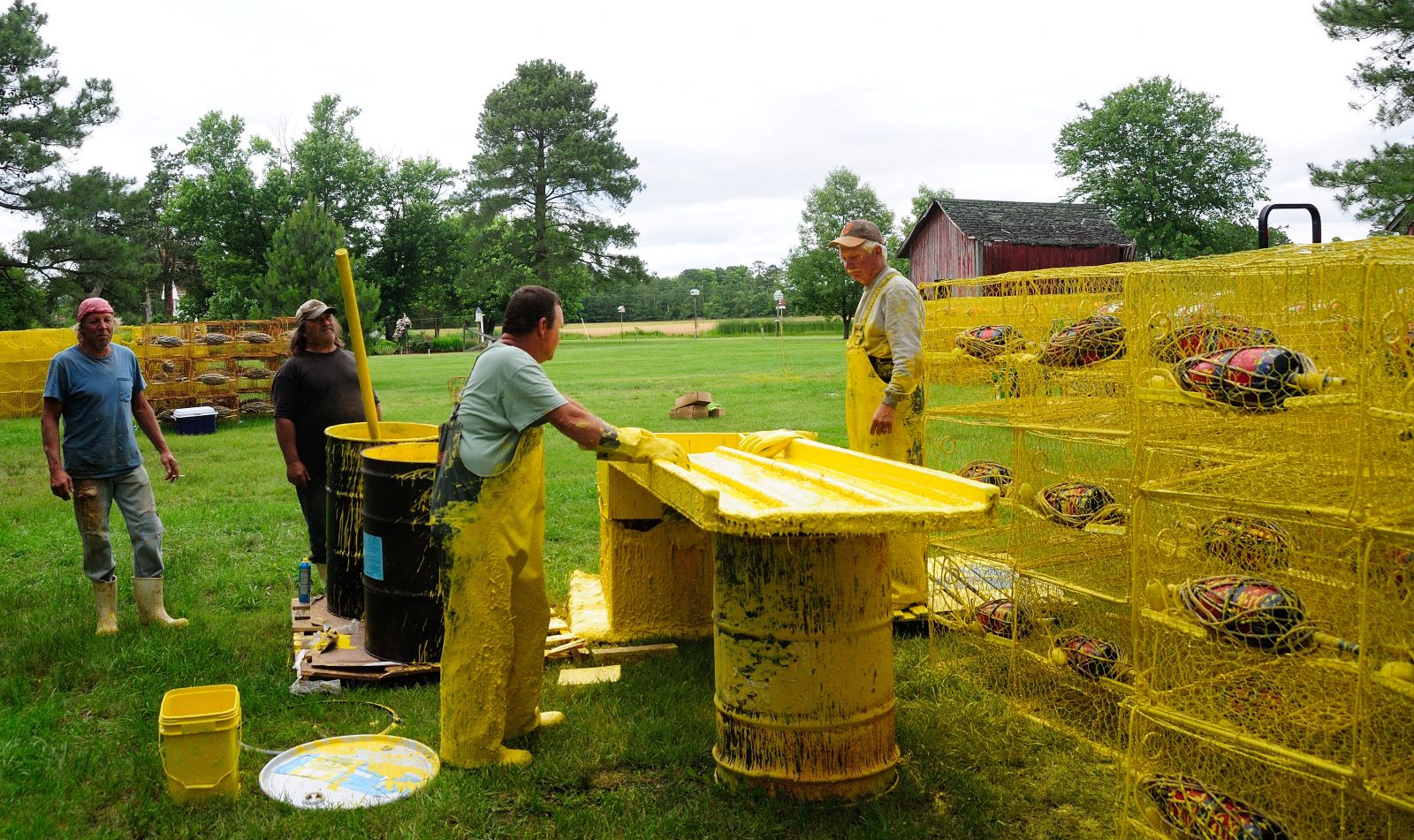 The Staff Meeting: Morris keeps his crab pots down on the lush green backyard behind his house in Church Creek, and here he organizes the hard work of painting them all. His crew (left to right) includes Frank Mand, Bernie Berggrun, and Bobby "Doodle" Patterson.

Down in the low-lying, marshy end of Dorchester County, Morris lives in the house he grew up in, on the land his mother’s family farmed, and he works in the water business he learned from his father. His front yard holds a family cemetery where he expects to be buried, and the backyard holds a well-tended garden, a couple red barns, and at certain times every year it is home to 1,000 or more crab pots. 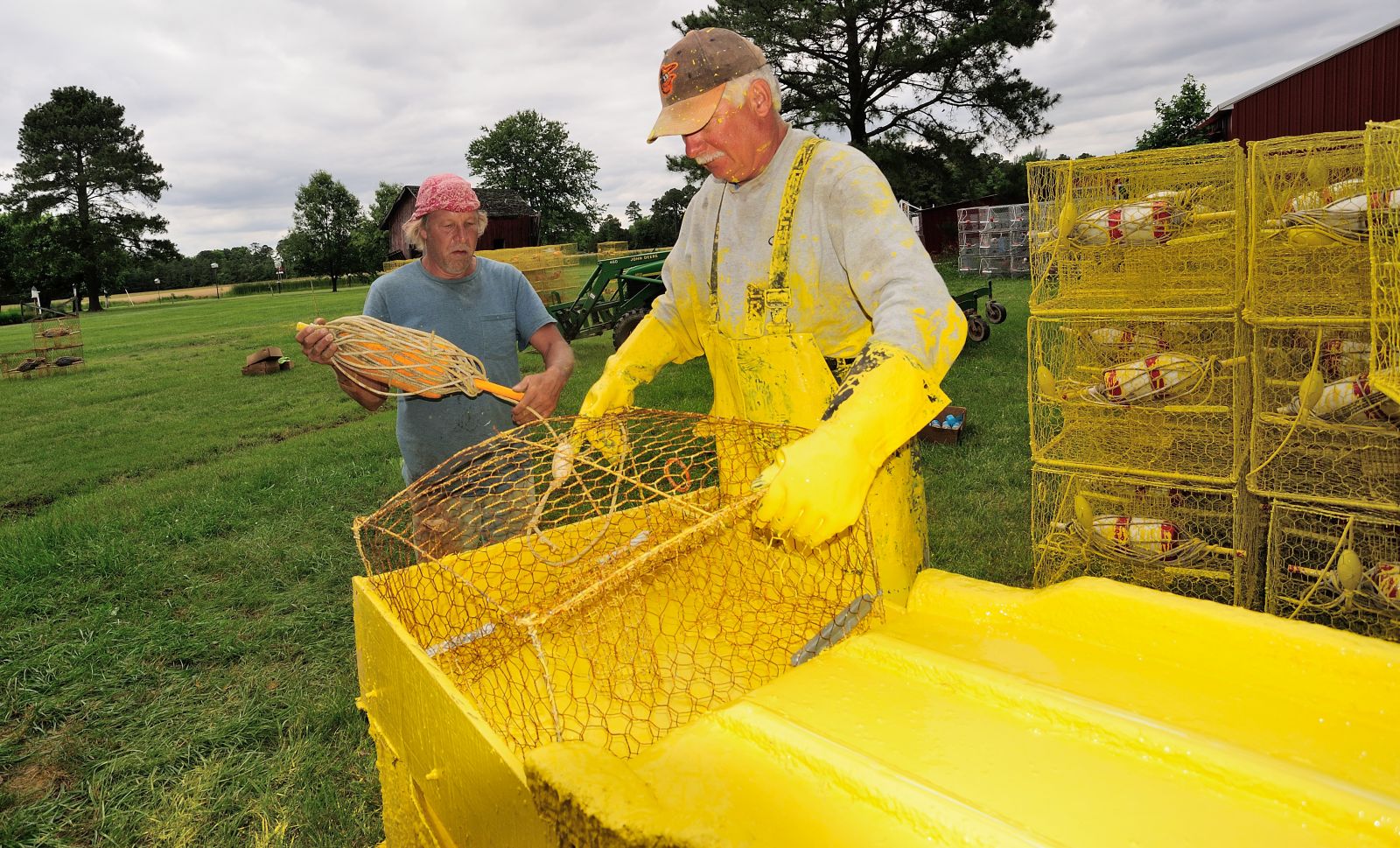 The Big Dip: Painting pots means dipping pots. The buoy and rope come out, and the pot takes a deep, colorful plunge in a tank of bright anti-fouling paint.

All those pots will need repainting three times every year: before the spring run of blue crabs heading north, before the summer crabbing season, and finally before the fall run of crabs heading south and into the deeps for the winter.  Each pot prep will be messy work, splattering yellow paint on the green grass and on sun-burned hands and arms and legs and faces. 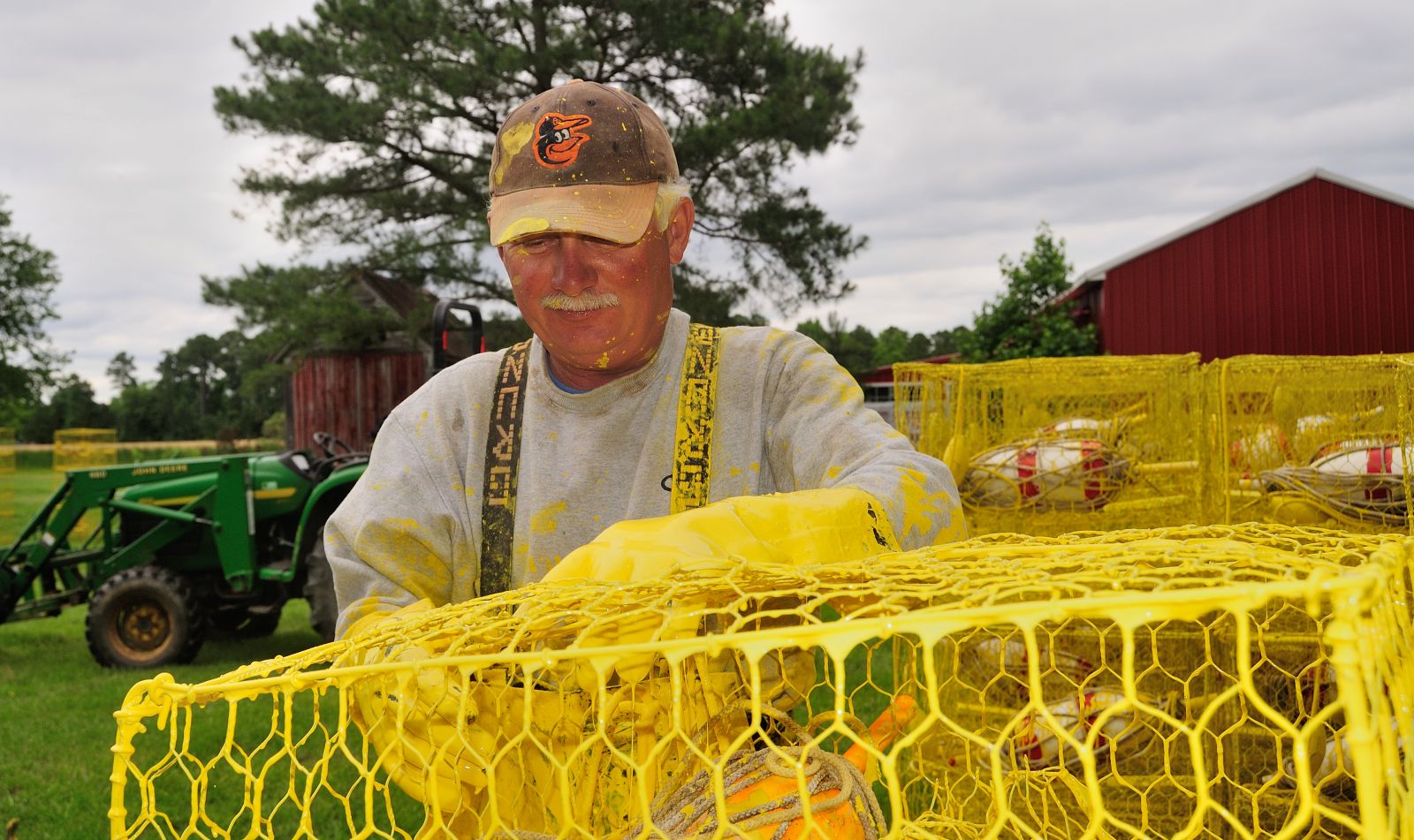 The Big Dipper: For Roger Morris summers in Maryland mean blue crabs and baseball and yellow paint on his Baltimore Orioles hat.

Like a lot of local watermen Morris follows the fortunes and misfortunes of his favorite baseball team, the Baltimore Orioles. “We talk about it every morning on the radio,” he says. “Smith Islanders are talking about it. The Tangier men are talking about. And we’re talking about it.” He even talks about the first Orioles game his father took him to, and he still relishes the moment he walked out of the tunnel and saw all the bright green grass at old Memorial Stadium. That field vanished decades ago, and some of its concrete rubble now sits on the bottom of the Bay creating an artificial fish reef. Most of the players he watched that day are long retired, but Morris owns a supply of extra baseball hats that keep their memories warm through his work days. 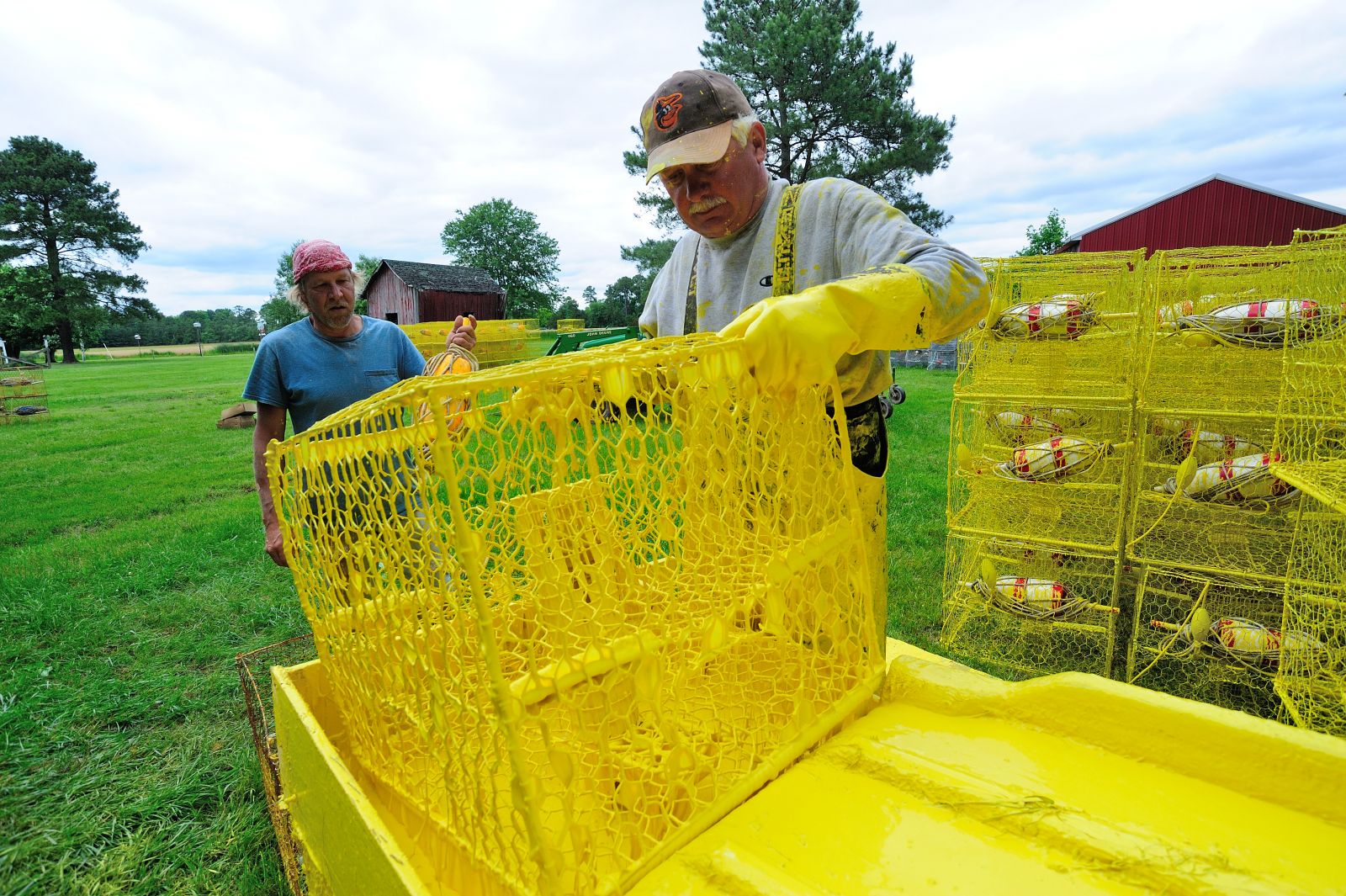 The Big Lift: Roger dunks the pot, hoists it back up, reloads the buoy and rope, and slides the dripping cage down the board to the next work station. 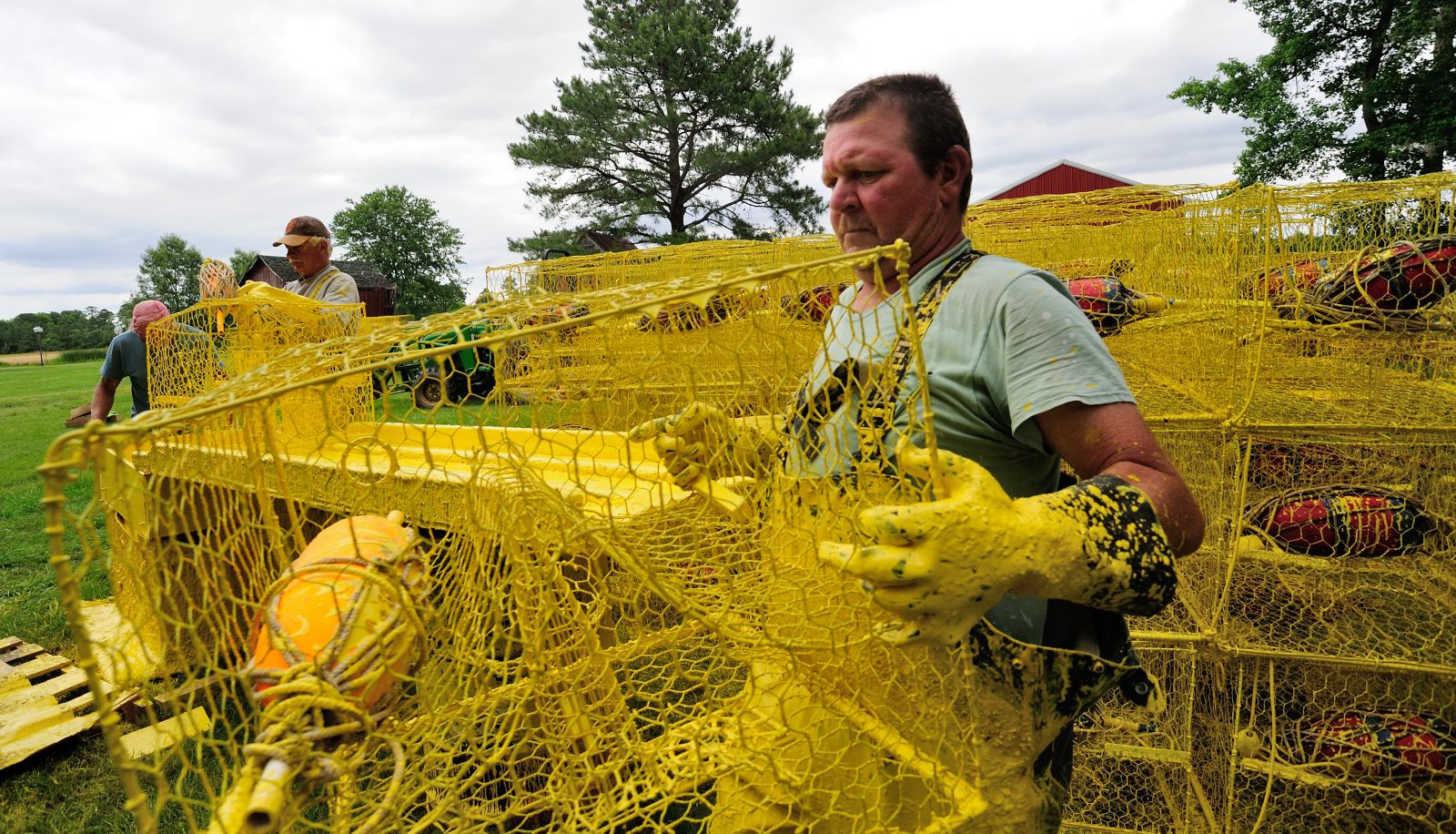 The Assembly Line: To speed their wet work, Roger and his crew operate a low-tech production line, and down at the tail end of the line "Doodle" Patterson grabs the cage, shakes off any extra paint, and totes the wet, dripping pot over to a nearby stack. 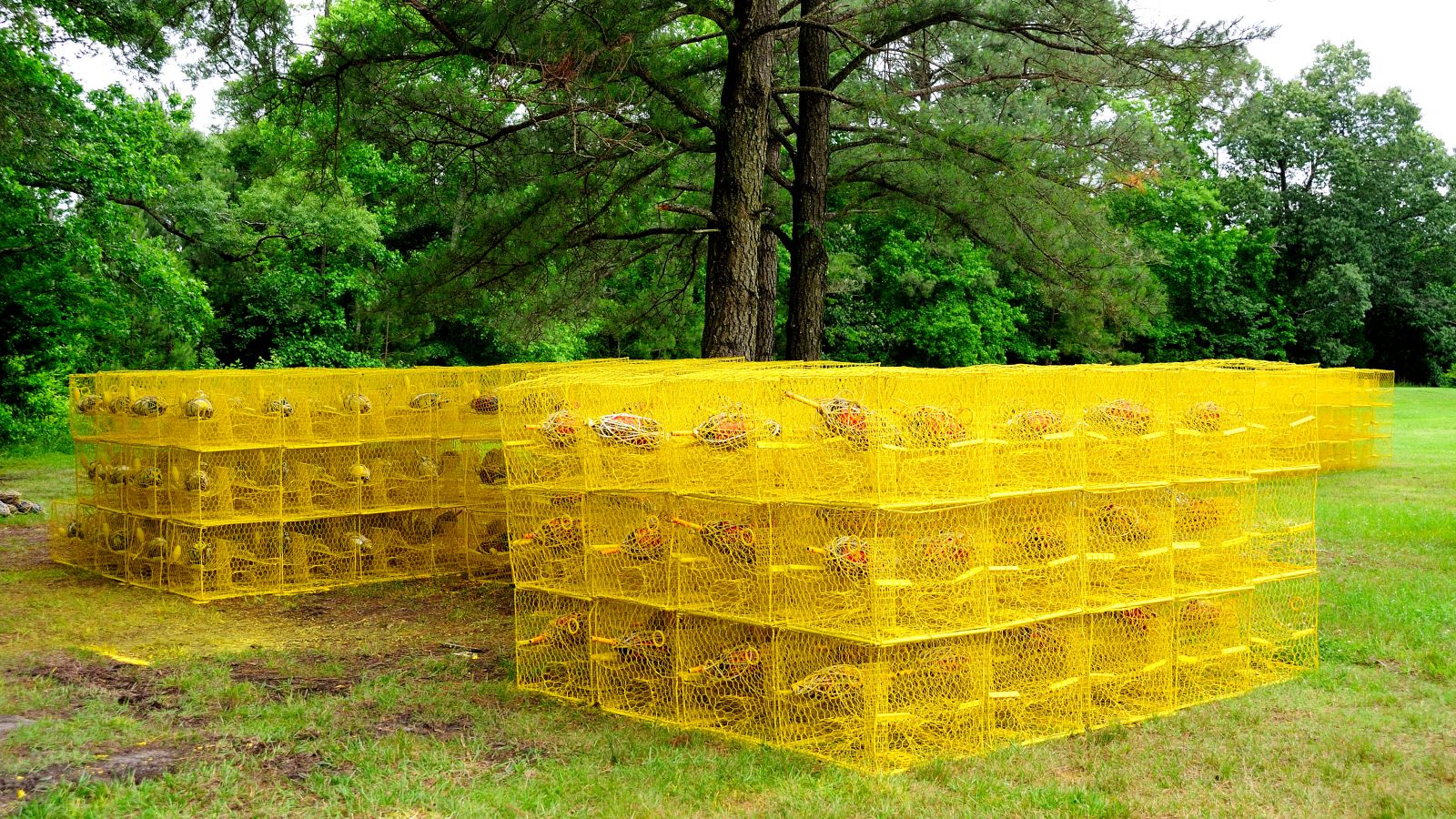 A Field of Crab Pots: All that work gradually fills the yard with golden stacks. Each one holds 60 brightly colored cages, each cage holds a buoy and rope neatly encased. There will eventually be more than 30 stacks drying under the trees and dripping paint on the bright green grass of Roger Morris’s backyard. 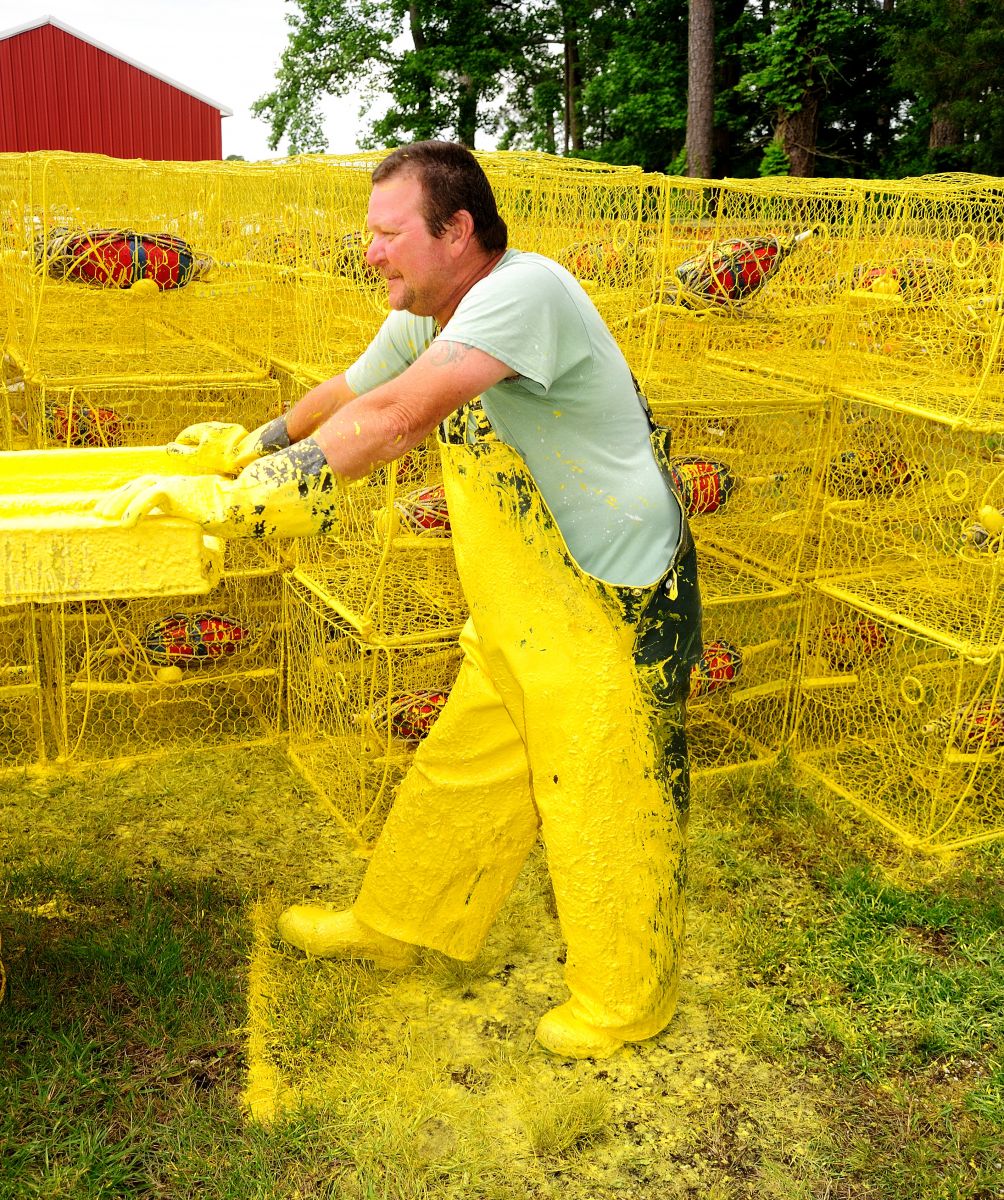 The Big Clean Up: A long day’s work leaves Patterson thinking about a beer break and a quick clean up, hoping all this water-based yellow paint will wash off easily. 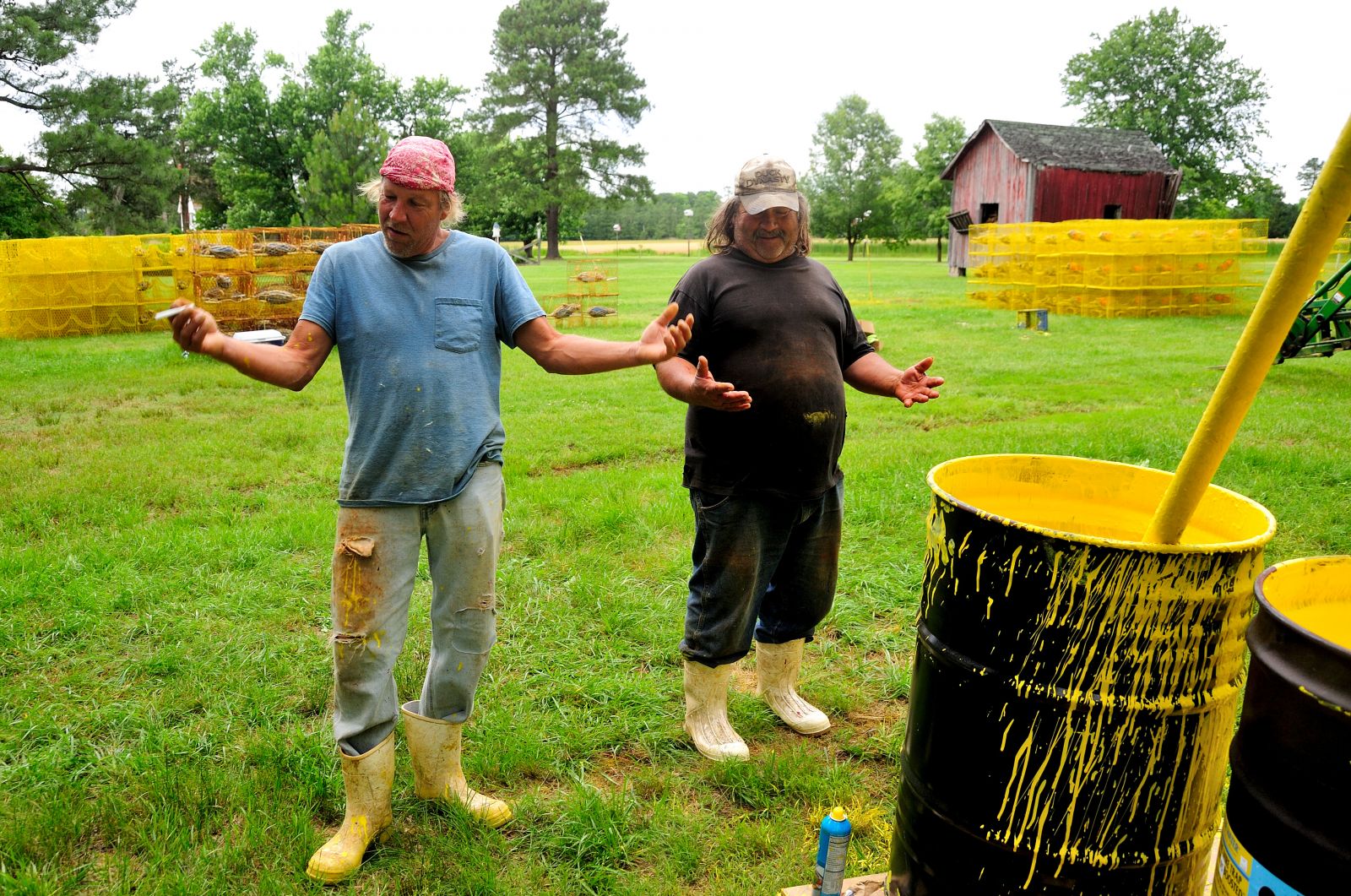 The Little Clean Up: Not everyone, however, will need a major clean up. Frank Mand and Bernie Berggrun somehow manage to survive the work mostly unscathed and unpainted. 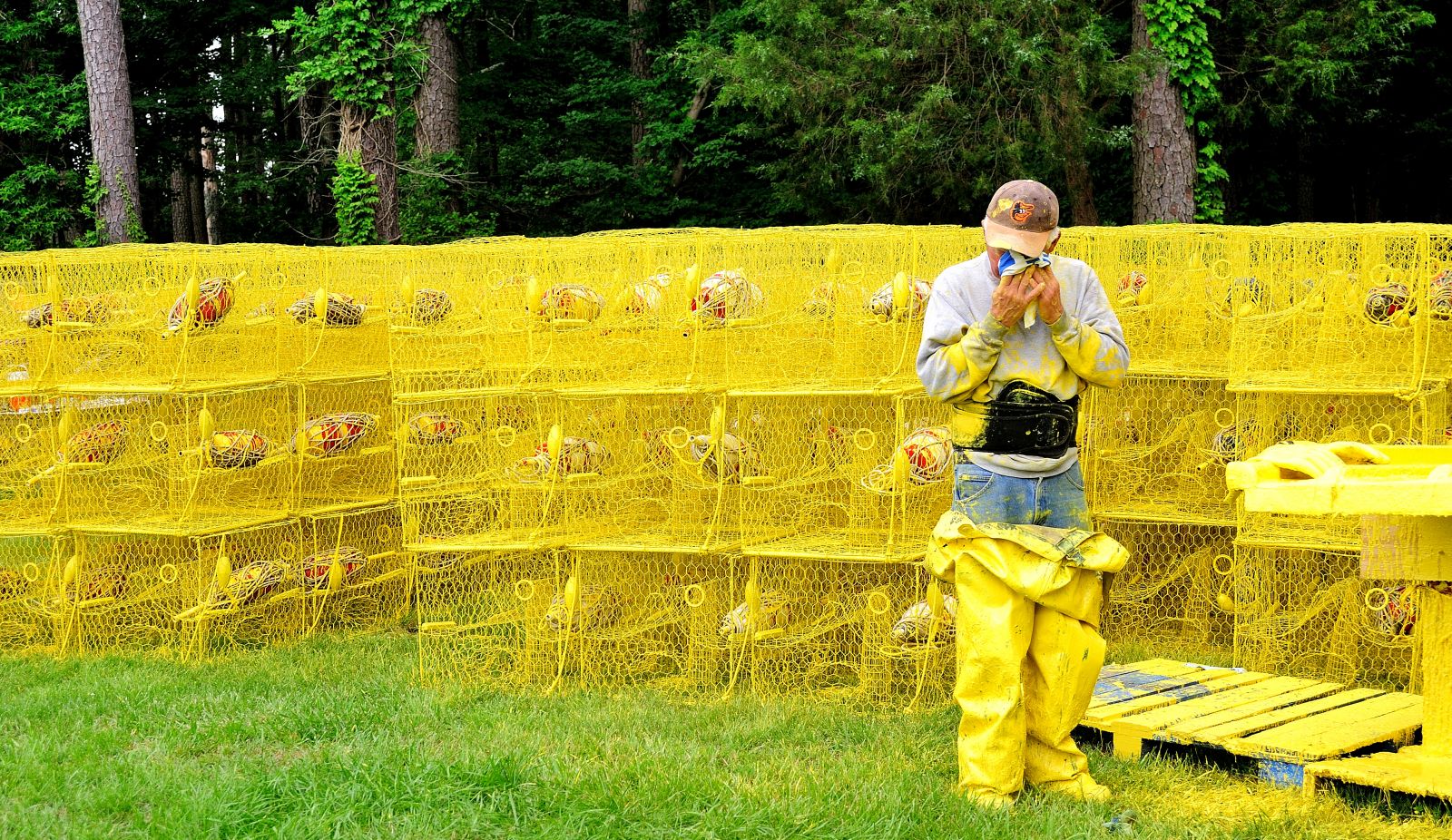 The High Cost of Hard Crabbing: Roger washes off paint and worries about the rising cost of his gear and the falling price for early season crabs.

This year costs went up for new pots, for the zinc bars and buoys that go in each pot, for the new rope needed to replace worn out line. New pots now run $50 each. But a bushel of male crabs now brings in $20 less than it did last fall and $10 less for a bushel of sooks. 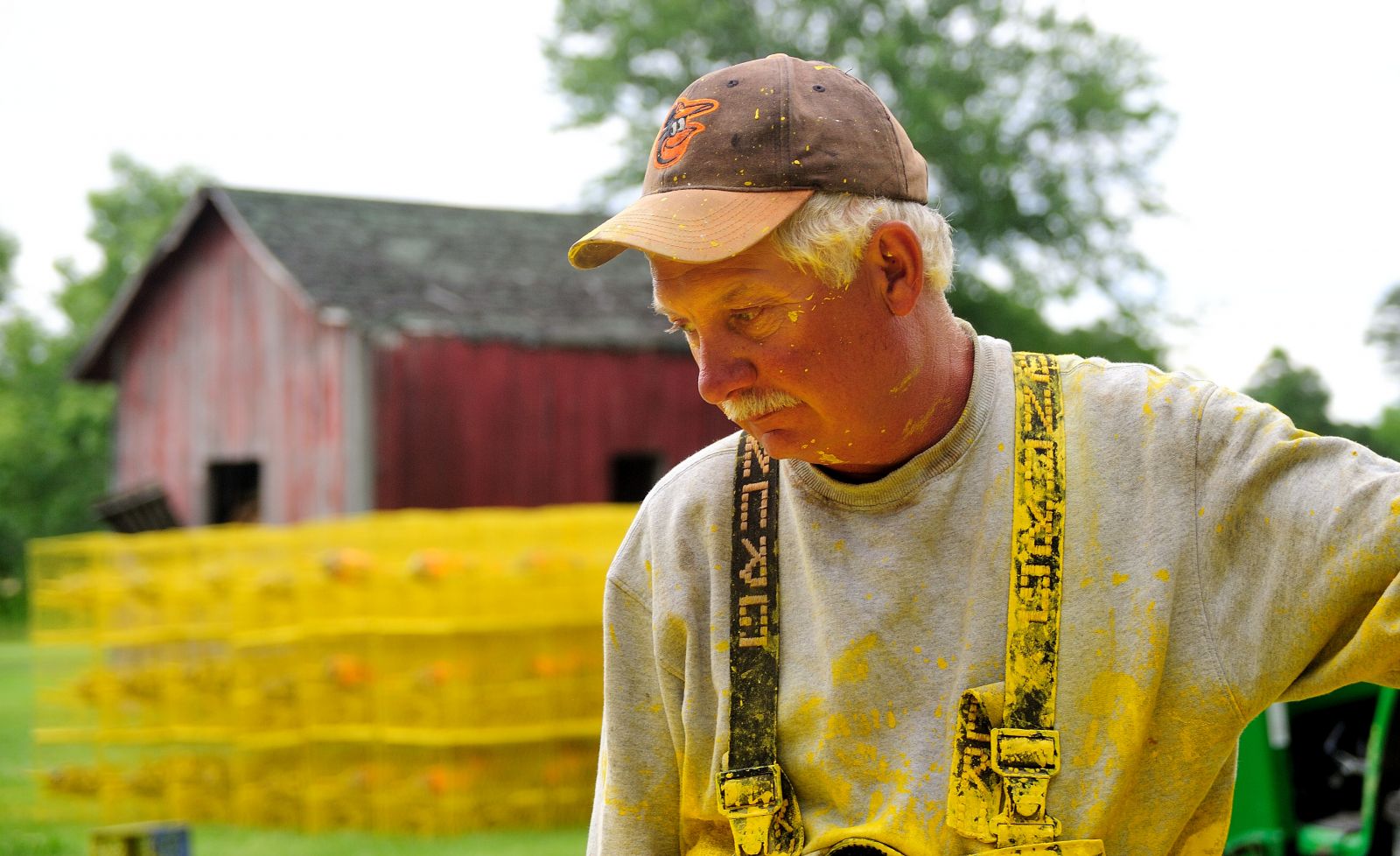 The Big Question: “Everything here went up – and the crabs went down,” he says. “Now how you going to keep on doing that? “

After painting his pots and fixing his boat and hiring his crew, Roger Morris has bet a lot of time and money that he can catch enough crabs to make all that work worthwhile. And he’s got good reason to worry. During the winter Morris helps run Maryland’s annual winter dredge survey that counts the number of blue crabs in the Bay. When the survey noted a drop in the number of juvenile crabs in the Bay, the Maryland Department of Natural Resources decided to close the harvest season 10 days earlier. And it cut in half the number of November crabs that Morris can legally catch this year. 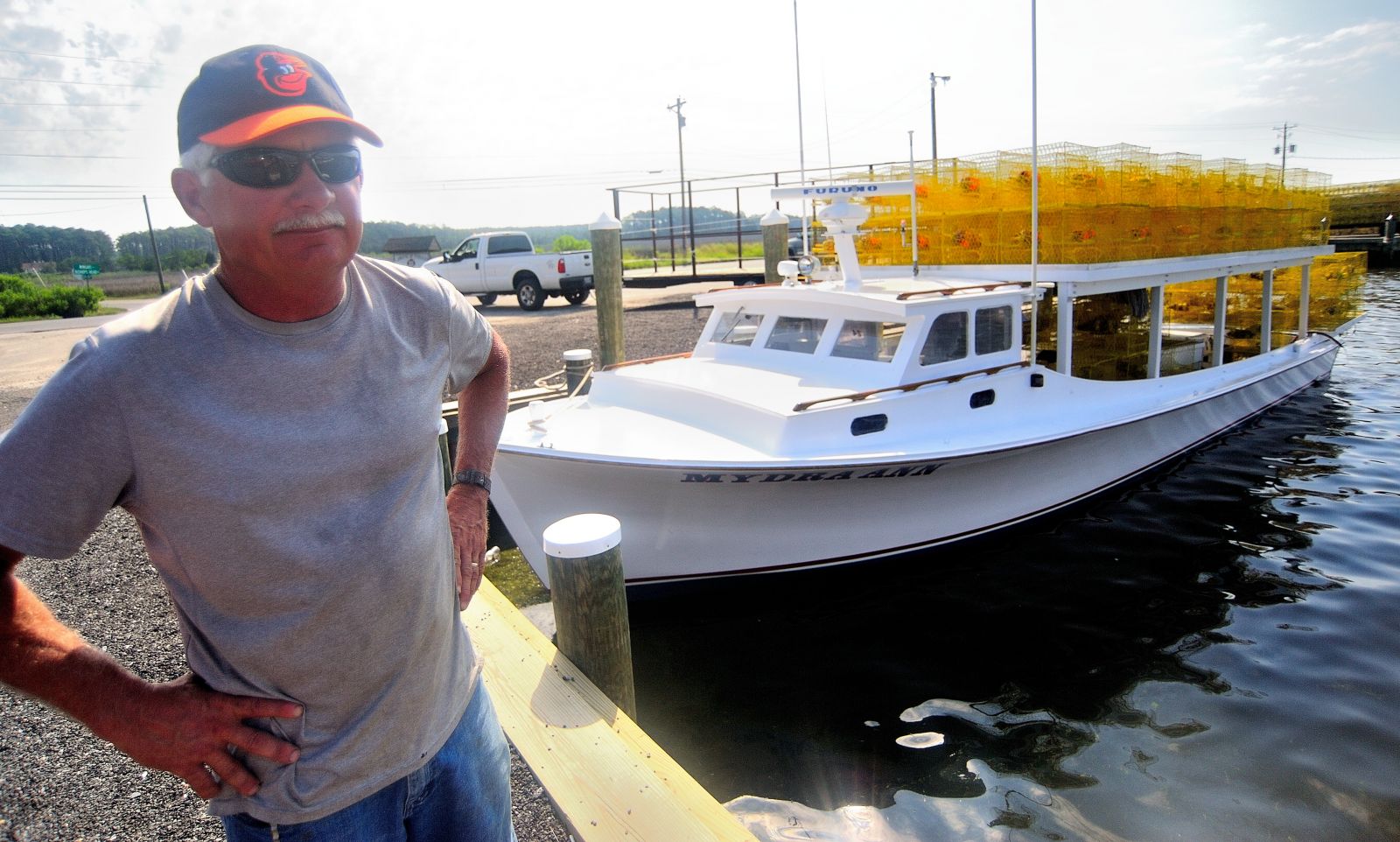 Game on: It's summer and time for baseball and blue crabs. And Roger Morris is ready with his well-loaded boat, his brightly painted pots, and his latest brand new Orioles baseball cap.

As he heads out, he has his hopes: that the Orioles will catch the Yankees in the American League, that he will catch a bumper crop of blue crabs out on the Chesapeake Bay. And he has his worries: how many crabs are waiting out there for him? “I think they’re going to get tight later in the year,” he says. "That’s what I think. But that crab doesn’t always agree with me. I’m telling you they are hard to figure out. Every year it’s different what they do to you. “