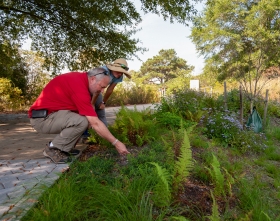 For about a decade, Ginna Tiernan would look out over the parking lot at Adkins Arboretum and think about what could be.

With more than 400 acres of towering tulip poplar, birch, and paw paw trees nestled next to a pond-like wetland outside, Tiernan knew she was lucky to work in such a natural setting. And she knew, too, that most of the visitors to the arboretum, near the town of Ridgely, Maryland, would have to drive. They had to park somewhere, especially when the arboretum hosted so many events.

But did it have to be a parking lot so flat and uninviting? From inside, Tiernan could see runoff from rainstorms flow into Blockston Branch, a tributary of Tuckahoe Creek that drains into the Choptank River near its headwaters. The landscaping in the lot—convex mulch islands with native plants—broke up the pavement aesthetically, but they were constructed at a different time and didn’t take into account new technologies that treat stormwater runoff. Tiernan, then adult program coordinator, had a long career in natural resources planning and a civil engineering degree from the Georgia Institute of Technology. She thought there had to be a better way to protect water quality.

In 2015, Tiernan was promoted to the executive director, and she began to think more seriously about creating a parking lot that treated runoff rather than sending it to the stream. She contacted a friend and professional colleague, Jennifer Dindinger, who is a Maryland Sea Grant Extension watershed specialist. Dindinger referred her to colleague Eric Helm Buehl, who serves as the watershed specialist for Sea Grant Extension in Caroline, Queen Anne, and northern Talbot County. Dindinger and Buehl are among the 12 Sea Grant Extension specialists who work in communities throughout Maryland on seafood safety, aquaculture production, coastal restoration, and water quality management.

In February of 2017, Buehl and Tiernan met to strategize, along with Caroline County Assistant Planning Director Leslie Grunden. Who would fund a new parking lot with features to address stormwater? How quickly could it happen? How could the parking lot look better and also be more efficient?

The answer came through the Chesapeake Bay Trust and the Maryland Department of Natural Resources. They approved a total of $328,750 for Adkins Arboretum from the Chesapeake and Atlantic Coastal Bays Trust Fund, a state granting program for watershed projects designed to reduce the nitrogen and phosphorus flowing into the Chesapeake. The idea behind stormwater projects like this one is to slow down water running off impervious surfaces and provide a green “sponge” to absorb the water and the nutrients it contains in a way that benefits the Chesapeake and the natural environment. Though the design of seven stormwater retention and pollinator gardens took close to a year, the construction team was able to build the gardens in just three months. And the former flat parking lot now included three bioretention areas totaling 3,178 square feet, along with 3,083 square feet of permeable pavers that let water soak in instead of sending it running off into waterways. The lot also gained numerous native trees and plants spread across the seven small gardens. 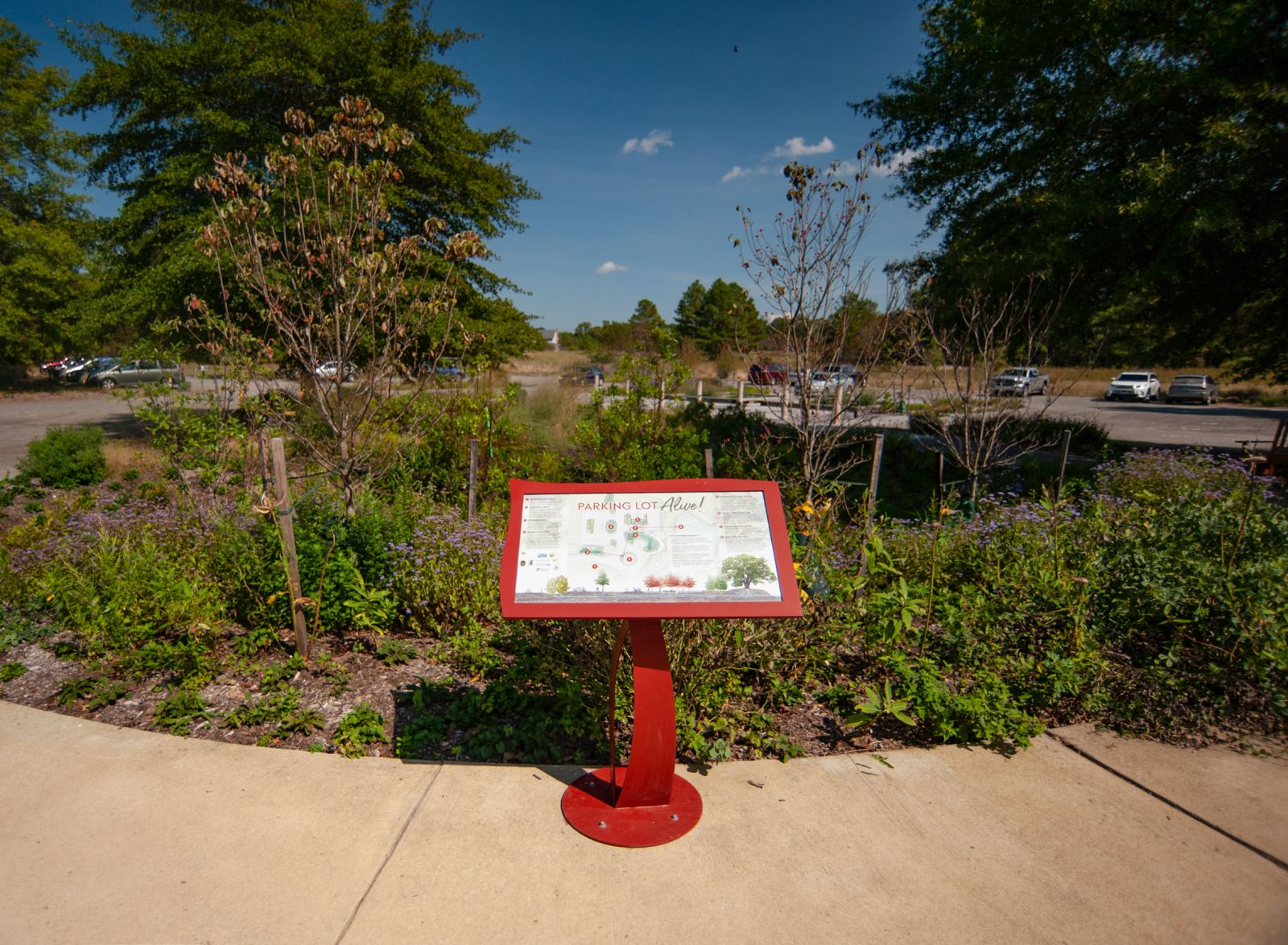 The project removed a total of 4,987 square feet of asphalt, according to the arboretum. And though no agency monitors the water at the arboretum to detect how much nitrogen and phosphorus the garden is keeping out of Tuckahoe Creek, Buehl said the estimated load reductions per year are approximately 10.3 pounds of nitrogen, 1.1 pounds of phosphorus, and 660 pounds of suspended sediment. It may not be as substantial as other projects, Buehl said, but every pound helps, especially in a location so close to the creek. Excess nitrogen and phosphorus that flow into creeks can cause algae blooms that block light needed by underwater grasses to thrive. The numbers on this project are not comparable to, say, upgrading a large sewage treatment plant, but Bay restoration depends on many little projects to make overall progress, Buehl said.

“We’ve reached the point in Bay restoration where everything helps and everyone needs to do their part,” he said.

They call the project Parking Lot Alive! and the description seems apt. On a recent autumn visit, butterflies flitted about on fragrant aster, blue mist, and milkweed blooms, while kingfishers, pileated woodpeckers, and herons could be spotted gliding by. Besides the seven planted gardens, the parking lot now features sediment control devices with sandstone or gravel on the bottom to help filter the water as well as an underground conduit to direct stormwater flows to the gardens from the lot in times of heavy rains.

“Before, it was pretty clearly barren for an arboretum, and now, it is so alive,” Tiernan said. “Now, when you come in, you totally know that you are somewhere special.” 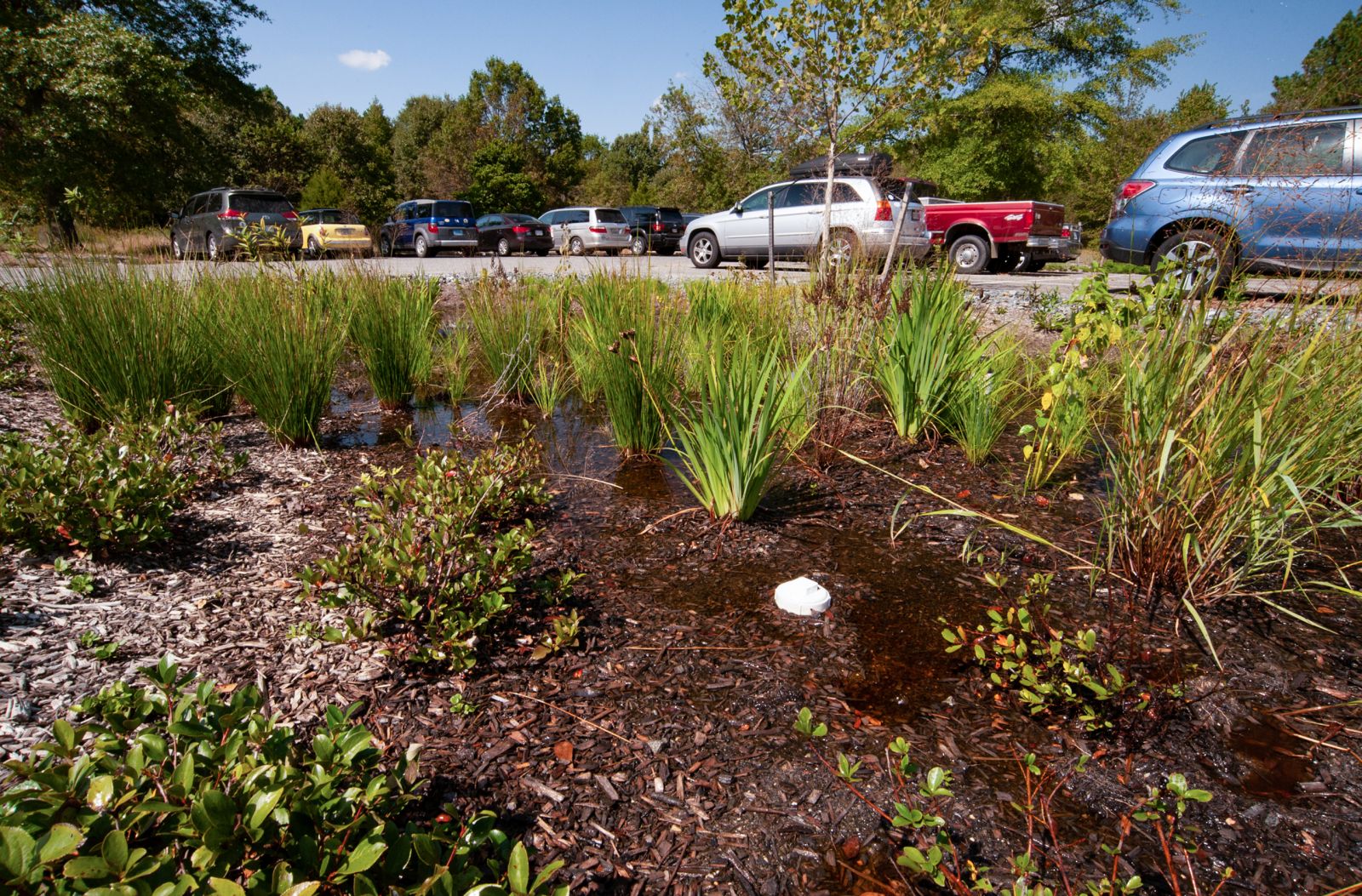 The Adkins Arboretum parking lot lost only a handful of spaces in their parking lot renovation, but they gained beautiful gardens that help absorb runoff from storms and protect the water quality of tributaries to the Choptank River. Photo credit: Nicky Lehming

Buehl wants the aboretum to be a demonstration site for other parking lot projects. Often, he says, people don’t think they can do the work or find the money. In this case, Unity Landscape was able to construct the project, after design work from Campion Hruby Landscape Architects and DesignGreenLLC. The design incorporated Adkins’ needs, including a turning radius for buses and accessible parking spaces near their facilities.

The arboretum estimates it has 18,000 visitors a year. Visitors had commented on the new look, but the arboretum got its big test in the late spring, when Tiernan nominated it as a site for the American Public Garden Association’s field trips from its annual conference in Washington, D.C. It was accepted.  The response was overwhelming as more than 60 attendees visited. “That was like putting us on a national map,” she said.

Tiernan credits Buehl with putting it all together, and said others in the county looking to do such water quality improvement projects should reach out to Sea Grant Extension specialists to find sources for funding, expertise, and design help.

“This was something where there was an opportunity,” she said, “and I think there will be more and more of those.”

If they do, perhaps more parking lots will show signs of life as they help protect water.