An Inclusive Future: Four years on, a project to encourage more students from Puerto Rico to explore the marine sciences is marking its progress 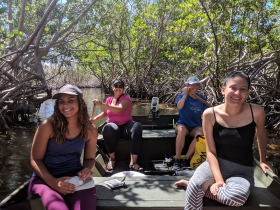 Patricia N. Vidal Geraldino was in her first year of undergraduate studies at Puerto Rico’s Universidad Ana G. Méndez when an opportunity came along that changed everything. A biology major planning to study pharmacy, she was invited to attend a meeting of Centro TORTUGA (Tropical Oceanography Research Training for Undergraduate Academics). Supported in part by Maryland Sea Grant, TORTUGA aimed to introduce undergraduate students in Puerto Rico to the field of marine sciences, involve them in research, and encourage them to pursue graduate education and careers in the geosciences.

“The mentors from the first year gave a presentation about what they did in their first year and how they went to these different natural reserves in Puerto Rico, and they talked about how that research helped them,” Vidal-Geraldino says. “Not a lot of freshman students get to do that kind of research in their first year, so I thought it would be a good thing for me to do.”

Four years later—despite the challenges of a pandemic, earthquakes, and two hurricanes that devastated the Caribbean island—Vidal-Geraldino graduated in May 2021 with a degree in biology and a position as a workforce fellow with the SEAS Islands Alliance (more on that in a moment). Through the workforce fellowship, in January she began working for Para La Naturaleza in Ceiba, a nonprofit that aims to expand protected natural areas in Puerto Rico and more strongly connect the island’s residents with conservation efforts. Meanwhile, she is applying to grad school in hopes of carving out a career in oceanography or marine science specializing in using remote sensing to study the effects of climate change on species’ population dynamics.

It’s a long way from being a pharmacist.

“I was able to see what I wanted to do in the future and learn about marine sciences,” Vidal-Geraldino says of Centro TORTUGA’s impact, adding that the program’s emphasis on research, presentation, and networking skills was equally important. “I have also been able to get out of my comfort zone by doing something I couldn’t believe I would do.”

Supported with a National Science Foundation (NSF) grant from 2016-2021, Maryland Sea Grant (MDSG) and colleagues with the University of Maryland Center for Environmental Science (UMCES) collaborated with educators from the Universidad Ana G. Méndez’s (UAGM) Cupey and Gurabo campuses to create Centro TORTUGA. The program’s core goals were to open the doors of marine science to undergraduate students who otherwise may not have avenues to the field, build their confidence as young scientists, and provide a network of faculty and near-peer mentors to support them during their undergraduate education. Along with academics, networking, conferences, and field and lab research opportunities, the program helped young college students find and create a sense of place and identity within the world of science.

The program’s initial NSF grant ended in 2021, but its work continues as the Puerto Rico hub of the SEAS (Supporting Emerging Aquatic Scientists) Islands Alliance, a collaboration that illuminates marine and environmental science career pathways for underrepresented minority students in the US territories and US-affiliated islands of Puerto Rico, Guam, and the US Virgin Islands.

TORTUGA’s key program components comprised school-year course work and summer activities. Newly enrolled UAGM students were introduced to marine science through laboratory and field research, including trips to coastal lagoons, beaches, mangroves, and coral reefs. They met local marine science professionals and participated in activities inside and outside the classroom.

During summer, first-year students attended a weeklong workshop including several days of field and lab work at Laguna Grande, a bioluminescent lagoon in Fajardo, Puerto Rico. Students researched the bioluminescent dinoflagellate Pyrodinium bahamense, analyzed data, and presented their findings at a mini-symposium to faculty, friends, and family. Second-year students attended a four-week intensive marine science course that included lectures, writing a research proposal, and conducting lab and field work. Third-year students participated in internships in Puerto Rico or the continental United States or conducted their own research projects with mentors.

TORTUGA also introduced students to professional development (applying to graduate school, writing an essay, presenting data) and networking opportunities. They attended national science conferences and, as their training advanced, some gave oral and poster presentations at these meetings. For most of the students, it was their first experience attending a professional society meeting, and for some it was their first time leaving Puerto Rico.

More than 60 students from Puerto Rico participated in the program; 18 conducted research projects, and more than 40 attended in-person or virtual professional meetings. More than 10 students completed internships, and nearly 20 students graduated with science degrees by the program’s conclusion. As of December 2021, three alums of Centro TORTUGA have either completed, enrolled in, or been accepted to STEM graduate programs.

To build on the project’s foundation and continue its momentum beyond the initial NSF grant, the TORTUGA team developed collaborations that have led to the SEAS Islands Alliance, a five-year grant funded through the NSF INCLUDES program (Inclusion Across the Nation of Communities of Learners of Underrepresented Discoverers in Engineering and Science). This collaboration, as well as the strong relationships TORTUGA’s field science has forged with conservation and marine science NGOs and governmental agencies in Puerto Rico, has helped expand high school, graduate student, and workforce placement opportunities—including Vidal-Geraldino’s SEAS Islands Alliance fellowship and her subsequent position with Para La Naturaleza.

Mónica Rodríguez Pabón, a sophomore at UAGM’s Cupey campus, joined TORTUGA in January 2021. Like Vidal-Geraldino, she was a first-year biology major looking toward a career in the medical field when she learned about TORTUGA. In 2021, she was able to participate in one class and two field excursions—one to Laguna Grande, the second to another bioluminescent bay on the Puerto Rico island of Vieques, Laguna Bahia Mosquito—and in December 2021 became the SEAS Islands Alliance digital communications intern.

TORTUGA has been entirely different from the rest of her undergraduate experience so far, she says. “The professors are so welcoming and so supportive, and it was immediate, the sense of family and friendship.” Likewise, Rodríguez-Pabón says, the “tortugitas” who serve as near-peer mentors—older students or alums such as Vidal-Geraldino—provide key support as they help the younger students navigate classes, research, and career options.

“It’s helpful to have students so close in age and experience,” she says. “It’s easy to talk to them, and they talk to you about your experience, and they’re always finding new ways to help us. It’s nice to see somebody who cares about us, and they make sure that we’re always comfortable or we always have options in our work.”

For instance, it was “tortugita” Solely Luyando Flusa, one of Rodríguez-Pabón’s near-peer mentors, who alerted her to the internship with SEAS Islands Alliance. Rodríguez-Pabón first learned about science communications at the Coastal and Estuarine Research Foundation (CERF) conference in November, which the TORTUGA students attended virtually with their faculty mentors.

“I like the marine science field, but I love writing,” Rodríguez-Pabón says. “So it was very interesting to me to watch a journalist who was a science communicator. I was like, ‘You can actually do this?’’’ Then Luyando-Flusa linked the application for the SEAS Islands Alliance digital communications internship into the Puerto Rico hub group chat; excited for the opportunity, Rodríguez-Pabón applied

“Where I’m from, people are not exposed to this kind of science,” Rodríguez-Pabón says. “It’s low-income. We don’t have people who are constantly explaining what’s going on around us, so I would definitely want to implement what I learn in these internships and the classes in the rest of my life.”