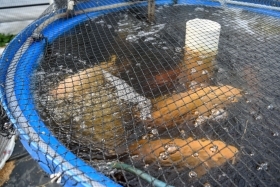 Lettuce, chard, kale -- and tilapia. These can go together on a dinner plate, but it’s unusual to see them growing together in the same place. Nevertheless you can see just that at this Aquaponics Project operated in a small farm facility in the middle of Baltimore by the Johns Hopkins Center for a Livable Future. Take a visual tour of the facility in this slideshow created by Daniel Strain, who toured the center in February 2015, and also described it in a recent On the Bay podcast. The center is helping to pioneer aquaponics, an innovative approach that combines the raising of fish with growing vegetables -- waste from the fish is taken up as fertilizer for the plants. 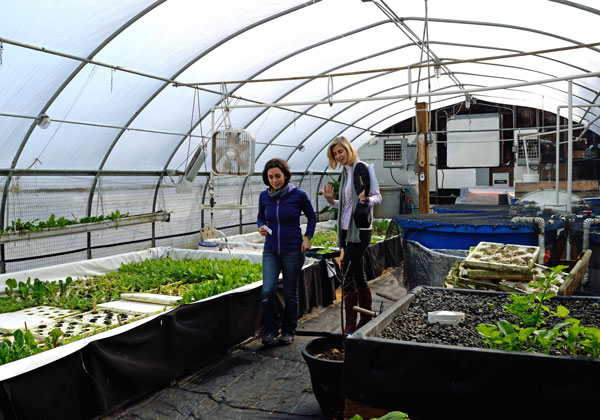 Laura Genello, farm manager for the project, shows a visitor around the center's aquaponics facility. The system is based out of a greenhouse in the Cylburn Arboretum in Baltimore. Johns Hopkins operates this facility, in part, to educate Marylanders about what aquaponics is -- and what goes into maintaining an aquaponics system. 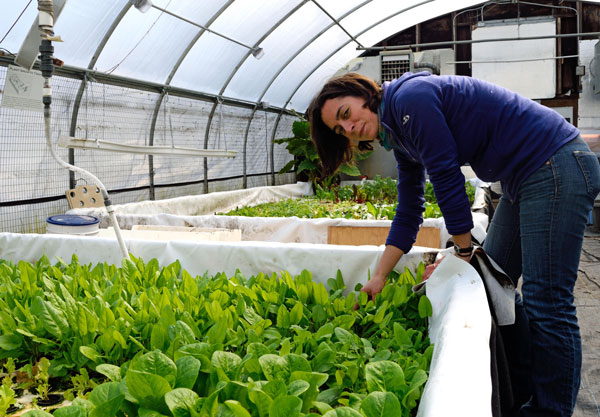 Unlike the more popular hydroponics systems, which produce only greens, aquaponics systems allow farmers to produce two types of food, Genello says: greens and fish. Many people who come to this facility are more excited about the fish, she adds. But because the animals grow relatively slowly, aquaponics facilities produce a lot more veggies than they do seafood. 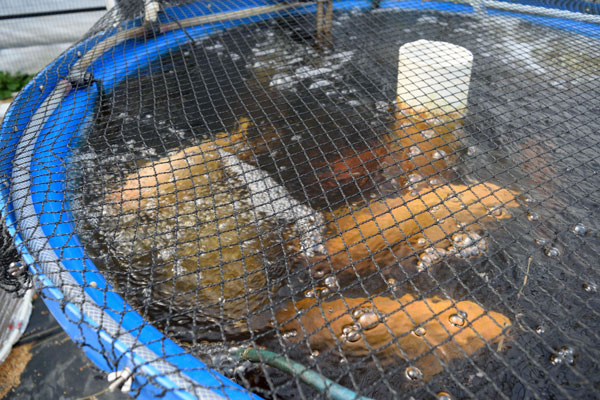 Tilapia of various ages and sizes bob around in several large fish tanks at the Johns Hopkins aquaponics farm. These oldest ones, at nearly two pounds, will be harvested soon to sell to a local Baltimore restaurant. Aquaponics systems provide a creative means of turning the waste produced by fish like these into fertilizer for plants. 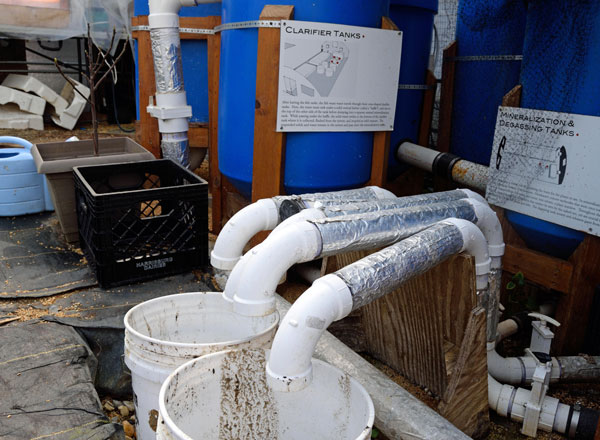 Before wastewater from the tilapia tanks ever reaches the plants, it passes through a filter that separates out all of the solid bits. Genello turns a knob to empty some of the resulting sludge into a bucket. She'll use this organic material later as a fertilizer for plants growing in another part of the greenhouse. It smells like a dirty fish tank, she says. 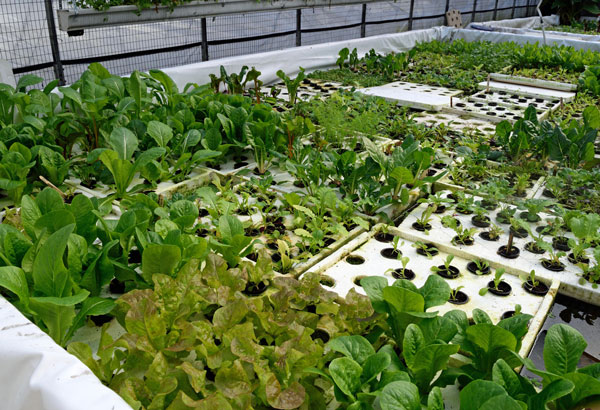 During the winter, the Johns Hopkins team grows a variety of cold-hardy plants at its farm, including lettuce, chard, and kale. With a steady supply of nutrients coming from the fish, the plants grow fast, too. Genello says that she harvests her chard once every two weeks at this time of year. 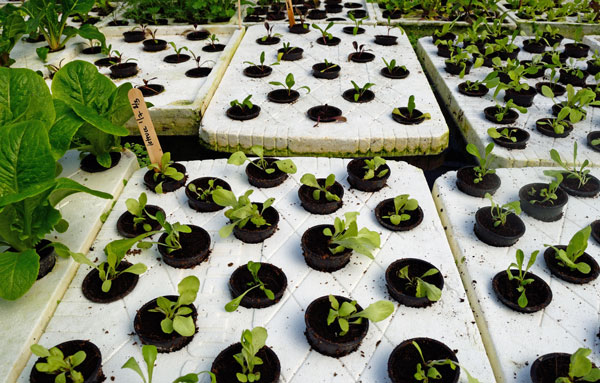 Recently planted lettuce is just starting to poke out from these pots secured in Styrofoam rafts. Genello says that aquaponics farms present an opportunity to teach children and adults alike about the workings of natural ecosystems, such as the wetlands where plants and water meet on the Chesapeake Bay. She and her colleagues even added small fish called mosquitofish to these plant beds to control the mosquitoes that once flourished in this greenhouse. 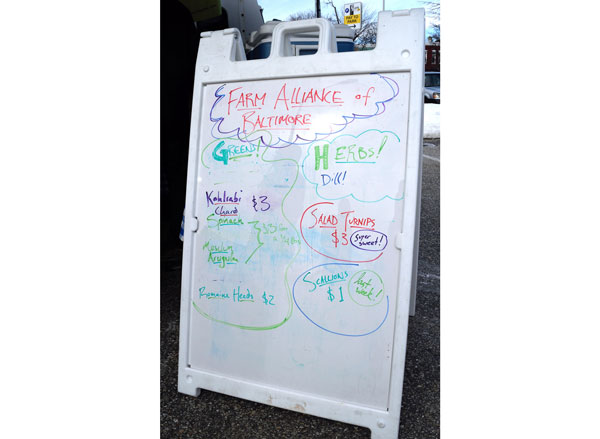 The Farm Alliance of Baltimore, a coalition of urban farmers, sells a wide range of greens at the 32nd Street Farmer's Market in Baltimore. Not all of these veggies were grown using aquaponics. But some were, including supplies of lettuce, Swiss chard, and watercress. 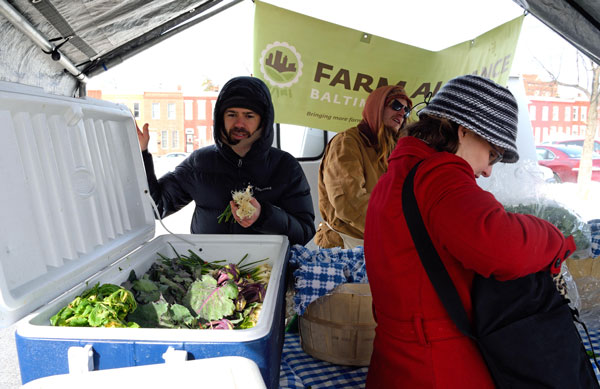 Bundled up against the cold, Dave Love grabs some greens from a cooler at the Farm Alliance's market stand. Love is a scientist at the Johns Hopkins Center for a Livable Future and also heads up its aquaponics project. In 2014, he and several colleagues published a survey of hundreds of aquaponics growers in and out of the United States. The team's findings suggest that aquaponics is becoming increasingly popular among hobbyist farmers. 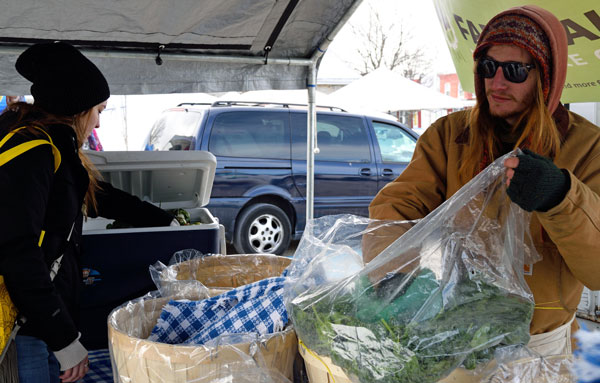 Many Marylanders are also turning to other forms of urban farming, especially in places like Baltimore where healthy fresh vegetables can be hard to find.

Finding the Right Path: It isn’t always a straight line