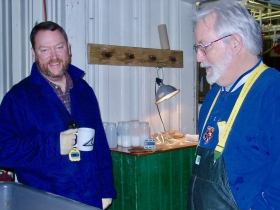 Give students a fish, and they can eat for a day.

Give students 10 striped bass, a laboratory with re-circulating water tanks, and a box full of feed, and you can teach them how a planet is increasingly feeding itself.

For more than 20 years, that’s what L. Curry Woods III has been doing with Animal Science 255, otherwise known as Introduction to Aquaculture, at the University of Maryland, College Park.

The class, which can take 20 students and is full each semester, delves into the general biology, anatomy, and physiology of fish, the most efficient protein producing animals on Earth. The course also examines the ecology and economics of raising fish in the aquatic environment, closed-recirculation aquaculture systems, water chemistry, and ecosystem considerations. Guest lecturers may be invited to talk about business plans, genetics, seafood safety, or to share their expertise about an important aquaculture species.

But half of the student’s course grade comes from raising 10, inch-long stripers that each student receives on the third week. Did they feed the fish enough to grow, but not too much that the food contributed to tank fouling? Did the fish convert the food into muscle mass efficiently? If not, what could the student have done differently — more frequent, smaller feedings, perhaps?

“My class is really about how to grow fish sustainably. And for my department in particular, since all of the other animals one could study are on land, I’m teaching a whole new set of principles,” Woods said. “The students compete with each other. They choose how to responsibly feed their fish. They are prepared for this population of fish that they are entrusted with, and some of them have the time of their lives in the class.”

The fish come from the same parents so they are genetic siblings — brothers and sisters — and each student begins with the same quantity of feed. Sometimes, Woods says, a fish doesn’t eat; students have to determine why. They measure their fish five times a semester, and they also look at parameters such as ammonia, nitrate, and dissolved oxygen.

Juvenile fish thrive and grow more efficiently when fed carefully more than once a day, and the students have access to the lab from 8 a.m. to 5 p.m. every weekday. Some take advantage; some don’t. But on Tuesdays and Thursdays, during the two-hour class, Woods provides the students with time to tend to their fish. If they at least did that, the fish would grow somewhat. No fish has ever starved to death — Woods said they typically don’t, not even in the wild. He noted that students have never “lost” a fish in the 20-plus years he’s been putting them into students’ hands (literally).

Students have come to his course from all over the university, many with their own perceptions about aquaculture being a polluting business or wild fish being the most healthy and sustainable option. Woods tries to address these perceptions with facts about global aquaculture.

Students who have excelled have also landed job opportunities in Woods’ lab. When they graduate, Woods sends his best students to work with zebrafish at the National Institutes of Health, where they use these fish as models to develop innovations in human medicine, while working for Charles River Laboratories.

Woods, who commutes 67 miles to College Park every day from his home north of Baltimore, is retiring this summer. He is hoping that Dan Theisen, facility manager for the Aquaculture Teaching Laboratory and its fish “life support systems” will be able to pick up right where he left off when the course resumes in the fall. It is an opportunity, he said, to teach responsible husbandry and change public perceptions, one student at a time.

“If you are going to get animal protein to feed people from seafood, there are only two sources. You capture it from wild populations, or you raise it via aquaculture. And given the situation we’re in, where we’re importing most of our seafood, and where many of the wild fish populations are being over-fished or recovering from over-fishing, it just is not sustainable with another 2 billion folks coming on board in the next 50 years,” he said. “I want them to understand that, because public perception is one of the biggest hang-ups facing aquaculture. It is such an easy target because it simply doesn’t have the resources to fight back.”