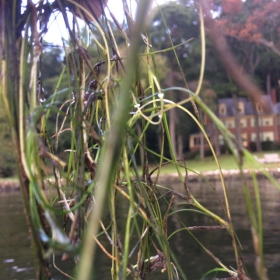 I walked to the dock’s edge from the parking lot to admire the 13-footer, nicknamed the “River Rat.” Soon, it would transport volunteer Tom Guay across the Severn River on a scientific expedition. A plant species known as submerged aquatic vegetation (SAV) lives in the shallow Chesapeake Bay and provides many important ecosystem services: safe habitat for economically important fish, regulated concentration of nutrients in the water, and improved water clarity by slowing down the sediment.

The Chesapeake Bay Program, the federal-state initiative overseeing the Bay cleanup, ran a pilot project beginning in 2017 that enlisted Guay and other volunteers to monitor SAV. The goal was to collect data at the ground level to supplement aerial imagery data that the Virginia Institute of Marine Science (VIMS) collects. Marine scientists, such as VIMS Professor Bob Orth, have been monitoring the location and abundance of SAV across the entire Chesapeake Bay using aerial images since 1978. “I've been involved since day one,” says Orth. But those pictures cannot distinguish between the approximately 23 SAV species found in the Bay whose different characteristics provide different benefits for the Bay’s ecosystem.

Brooke Landry, a natural resource biologist at the Maryland Department of Natural Resources, came up with the idea of recruiting volunteer “citizen scientists” to fill those gaps in data. In an area as large as the Bay, it would take too much time for a small group of full-time scientists to collect that information. But Landry reasoned that local volunteers with knowledge of the Bay’s creeks, inlets, and tributaries could use the aerial photography as a guide to gather the data needed to comprehensively figure out where the SAV grow in the Bay. Landry recruited volunteers from four groups –  the Havre de Grace Maritime Center, the James River Association, the Midshore Riverkeeper Conservancy on the Choptank River, and the Severn River Association.

On a brisk November morning, Tom Guay took me out on the Severn aboard the River Rat to share how he monitors SAV. For a typical trip, Guay would travel to locations where the aerial imagery indicated there is submerged aquatic vegetation. As we make our way out of his neighborhood dock with the aerial imagery data as our guide, Guay explains that neither the river banks covered by loose rock to limits erosion, nor the straighter channels of the river with heavy boat traffic are likely to make good SAV habitat. The best habitat, according to Guay, is protected inlets no deeper than a few feet.

Yet even on the main stem of the Severn River, in Joyce Lane, aerial photography and a summer trip by Guay confirmed the presence of SAV. Stopping in the channel, Guay threw his homemade SAV catcher overboard: a couple of rake heads bolted together attached to a rope. At a depth of about 2 feet we found some widgeon grass (Ruppia maritima), a species common in the Severn River. “During the summer,” Guay says, “the visibility is poor, and you’re blind to what’s underneath the water even if it’s just a few tens of centimeters down.” Today in mid-November, however, you can easily see the bottom of the river.

The SAV monitoring kit for each volunteer in the project consists of a five-gallon bucket containing a handheld GPS, a ruler to measure SAV length, a disc used to measure water clarity, and a field guide printed on water-resistant paper to distinguish species from one another. At each location, volunteers document the SAV species they find, the habitat type, the water clarity and depth and a few other environmental measurements. The volunteers snap a picture of each SAV sample on their smartphones and upload it online. By looking at those images, scientists like Landry and Orth can check the volunteers’ interpretation of SAV types. As we head towards a bank of the river protected from the wind and waves produced from boat traffic, Guay tells me, “You don’t need a Ph.D. to do this. You just need to want to spend some time out on the water.”

After collecting the data on the widgeon grass we found in Jay Creek that day, Guay pulls out a map from his volunteer kit showing me the Severn River with its many tributaries. Overlain on the map are colors describing where Landry suspects there is SAV, based on the aerial imagery. Guay points to Round Bay, at the northern end of the Severn River. Shaded color on the east coast of Round Bay indicates SAV should be there, and volunteers confirmed that earlier in the year. In the summer, Guay says, “grasses in the Severn River were a mix of primarily widgeon grass with a healthy mix of Redhead grass (Potamogeton perfoliatus) and a bit of [Eurasian water] milfoil (Myriophyllum spicatum).” On the west coast of Round Bay, however, the aerial imagery doesn’t show SAV, but Guay said that on another day earlier in the season, volunteers found small pockets of SAV beds no more than a few feet in diameter. The aerial images can only resolve SAV beds of about 3 square meters or larger. Relying on volunteers has been “absolutely crucial,” says Orth, providing “much more data” than could be collected otherwise.

Guay has had no trouble finding people who want to join the project and begin tracking down SAV on the Severn River. “Sometimes I had more volunteers than I knew what to do with,” he says. Landry says the project “gives people pride in their space.” There is a long history of local efforts to protect the Severn. Founded in 1911, the Severn River Association is the oldest organization in the United States dedicated to river preservation. Landry said many volunteers in the SAV project are retired scientists and others now out of the work force who have the time to go out on the water. Some of them remember a time when the SAV were far more plentiful, and some Bay-side homeowners and boaters considered them a nuisance. But Landry says that people participating in this monitoring project gain a sense of contributing to their community, and the work “gives them hope for [a SAV] recovery.”

Landry wants to continue the SAV monitoring project in 2018 with an earlier springtime start in order to collect data on additional species. Guay said, “We [Landry and volunteers] expect to find Sago (Stuckenia pectinate) and Horned (Zannichellia palustris) Pondweed in the spring” before the summer transition to widgeon and redhead grass. As Guay and I head back to the dock, we make one more stop near an underwater grass bed. We brought some fish traps out with us in the boat because Guay also wants to show me about the newest monitoring project he’s volunteered for: tracking the populations of mummichog, mosquito fish, and other foraging species in these same waters. The same grant that funded the SAV project is also supporting this effort to better understand which species of fish live in near-shore locations around the Bay, which to date have been under-sampled for this purpose. It sounds like Tom and the “River Rat” will be spending a lot more time out on the water.