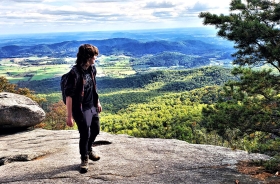 I’ve taken a bit of a roundabout path to get where I am now in my education and career. Before graduating from high school in 2019, I focused most of my time on artistic endeavors: studio art classes, designing a literary magazine, and spending hours after school rearranging and programming theater lights. Despite all of that, I wanted to preserve those activities as things to do for fun when I reached college. I thought turning my hobbies into a career would ruin the appeal by making them into something I had to do instead of something I wanted to do. The one non-artistic subject I felt really “clicked” for me as an interest was psychology, so that’s what I decided to pursue at the University of Maryland, College Park.

When the pandemic began in the second semester of my freshman year, I started to second guess that decision as well as what had led me to college in the first place. It’s not that the psychology classes were too difficult or weren’t interesting, I just couldn’t see myself in a related career.

Trying to picture where I’d be in the future became essential, because the months spent in lockdown, away from campus and friends, made me feel like I had lost valuable time that I didn’t appreciate enough before it was gone. I felt stuck, and almost everything seemed hopelessly out of my control, so I started re-examining things that I knew I could change—including my major.

A large part of what led me to switch to environmental science and policy was the hope I felt hearing news about environmental recovery while most of the world was isolated at home. For a brief time, waters became cleaner, global emissions dropped, and wildlife returned to habitats they had been displaced from. Some people try to push the narrative that our planet is doomed because of anthropogenic damage no matter what we do now, but the recoveries during lockdown completely disproved that to me. I knew we couldn’t keep our lives on hold forever so the environmental benefits would be temporary, but a hopeless perspective is what will make those benefits impossible to achieve going forward.

Environmental science and policy became a field I could picture myself working in. It was an opportunity to apply my college education toward change I desperately wanted to see in the world. Individual actions may not outweigh the damage done by powerful corporations and negligent leaders, but I believe an impact can be made with enough people doing what we can with the resources we have.

The gradual recoveries in the Chesapeake Bay and its watershed over the past few decades illustrate that improvement is possible, but significant work still needs to be done. I chose marine and coastal management as a concentration within my major with the hope that I could help in some way.

I grew up around Baltimore spending a lot of time outdoors, and I’ve always felt connected to the Bay and the ocean since my family visited the beach quite often. Being connected to nature in general has always been a part of who I am. My mom started taking me on hikes pretty much as soon as I could walk, and my love for the outdoors continued to flourish as I got older, exploring hobbies like surfing, climbing, camping, and nature photography. In consequence, an unyielding respect for the environment was instilled in me from a young age.

Although it’s just one part of me, my transgender and nonbinary identity is an unavoidable aspect of who I am. I’ve been lucky that this hasn’t completely stopped me from pursuing education and career opportunities, but being trans in a STEM field has its challenges. The scientific community prides itself on being generally progressive, and while that may be true in some ways, scientific advancement has an undeniable history of colonialism, racism, sexism, ableism, and other overarching biases toward upholding the status quo. It’s not easy to be confident about your abilities in STEM while your community continues to be the subject of ridicule, harassment, and targeted legislation, especially when misconstrued and outdated science is being used as justification for that.

That’s why I’m often torn between disclosing my identity or playing it safe. With Sea Grant’s Community Engaged Internship (CEI) program, I felt more confident that being honest wouldn’t hinder me, and I’m glad I wasn’t mistaken. I appreciate Sea Grant’s commitment to inclusivity, and despite my trans identity, I know that I also benefit from being a white trans person with access to a college education. By continuing to pursue environmental science as a career, I hope to leverage that privilege while also providing visibility for other trans people who have the same reservations about their careers that I do.

I’m incredibly thankful that being an intern at Maryland Sea Grant will provide the chance to do that over this summer. The CEI program appealed to me because of its focus on science communication through creative outreach projects. Before this internship, I started volunteering with NOAA’s Phytoplankton Monitoring Network (PMN), which got me interested in Maryland Sea Grant’s research on bacterial colonies in the Baltimore Inner Harbor. I’m excited to have the opportunity to explore scientific topics such as aquaculture, biofilms, and microplastics, while incorporating artistic skills like photography and creative writing to share those topics with others.

After graduating from the University of Maryland, College Park, I hope to do some kind of environmental field work that will have a social component to connect with people who face the impacts of environmental injustices. During my internship I intend to learn as much as possible in order to develop skills that will help me towards that goal.