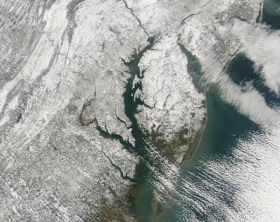 The overwhelming interest in one of our recent social media posts made us curious about how the Chesapeake Bay interacts with winter weather.

If you spend time watching The Weather Channel in winter you’ve heard the term “lake effect snow,” and you’d be correct associating this weather phenomenon with the Great Lakes. But did you know that Maryland has its own version of this, what amounts to Bay-effect snow?

Lake-effect snow happens when cold, Arctic air sweeps over the comparatively warm water of, for instance, the Great Lakes. That temperature difference causes heat and moisture to be drawn upward from the water to form clouds, which eventually grow laden enough to drop their load of now-cold moisture in bands of snow, downwind of the lake and over the cold land.

The same thing happens on the Chesapeake when Arctic air plunges across the Bay, often in the wake of a cold front. As the low passes, the wind shifts and blows from the west and northwest. When that cold air mass hits the Bay’s warm water, clouds form.

Brown says that the Chesapeake’s influence had little to do with the remarkable NASA satellite image after the winter storm that slammed the region January 2-3, dumping up to a foot of snow on parts of the Eastern Shore. On the image, the startlingly precise line demarcating the snowfall’s northern edge runs southwest to northeast across the Appalachian Mountains toward the Bay, ending just beyond Northeast, Maryland, and the Bay’s northern reaches. In that case, he says, the snow’s abrupt cut-off was due to the high-pressure system, full of dry air, just to the northwest of the Bay.

But along with Bay-effect snow, the Chesapeake’s warm-ish waters can also help intensify low-pressure systems, providing them more energy. While the Atlantic Ocean and the nearby Gulf Stream are the primary drivers of winter storms in our region, Brown says, the wider expanses of the middle and lower Bay play a supporting role.

“It funnels the wind, and the wind will be a lot stronger,” he says. “Going over the warm water, the wind will increase in a cold air mass.” When strong northwest winds follow a cold front, as high pressure builds, “areas over land will diminish where it mixes down, but over the Bay it will continue to be windy where it continues to mix because of the warm water.” The warm water helps the cold air remain unstable, and so winds will continue to blow harder, longer, over the Bay.

Photo, top left: The Chesapeake Bay on Sunday, December 20, 2009, in the wake of a record-breaking nor’easter that brought record-breaking snow to the region. Photo credit: NASA Earth Observatory