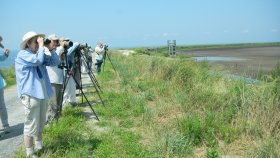 I’m on the edge of a bench with my life vest zipped and buckled. I have a small red point-and-shoot camera and a pair of petite binoculars that I think looks pretty stylish — for the birding set. Twenty-four of my fellow voyagers carry cameras with ginormous lenses, binoculars twice the size of mine, and spotting scopes on tripods.

“Welcome to the Terrapin!” a voice booms from a speaker aboard the SeaArk Dauntless-model boat that travels between Tilghman Island on Maryland’s Eastern Shore and Poplar Island. The boat is at its maximum capacity as we embark at 9 a.m. on the Poplar Island Bird Tour.

Poplar Island is 5 miles from Tilghman Island in the Chesapeake Bay. In the early 1900s, it was home to a town of 100 residents. Later, Presidents Franklin D. Roosevelt and Harry S. Truman would visit as part of a hunting club.

Over time, winds and tides eroded the island, and the people left. In 1847, Poplar Island was 1,100 acres. By the 1990s, all that remained was four acres. That loss was not only troubling for the biologists, who lamented shrinking habitat, but also for nearby communities such as Tilghman, which relied on Poplar to protect it from erosion and slow down wave action.

Meanwhile, the Port of Baltimore was filling up with sediment from the Patapsco River. Like today, the navigation channels approaching the port needed to be 50 feet deep to accommodate the large ships that visit the port. Clearing those channels of sediment — a process called dredging — typically yields 4.5 million cubic yards of sediment a year. Still more sediment is dredged from the channels throughout the Bay, and it had no place to go because Maryland passed a law that banned the practice of open Bay dumping.

It was a problem in search of a solution. And with Poplar Island shrinking and sediment from the Bay piling up, a classic case of supply and demand developed.

Yet a “Free Sediment to Good Home” sign can only go so far. Dredged material sometimes is contaminated with heavy metals and pesticides. That means it’s unfit for some agricultural uses but may be acceptable for industrial. Typically, managers use dredged material for shoreline restoration, thin layering (where a layer of sediment is broadcast over a marsh to help build its elevation), topsoil, roadway beds, or landfill covers. 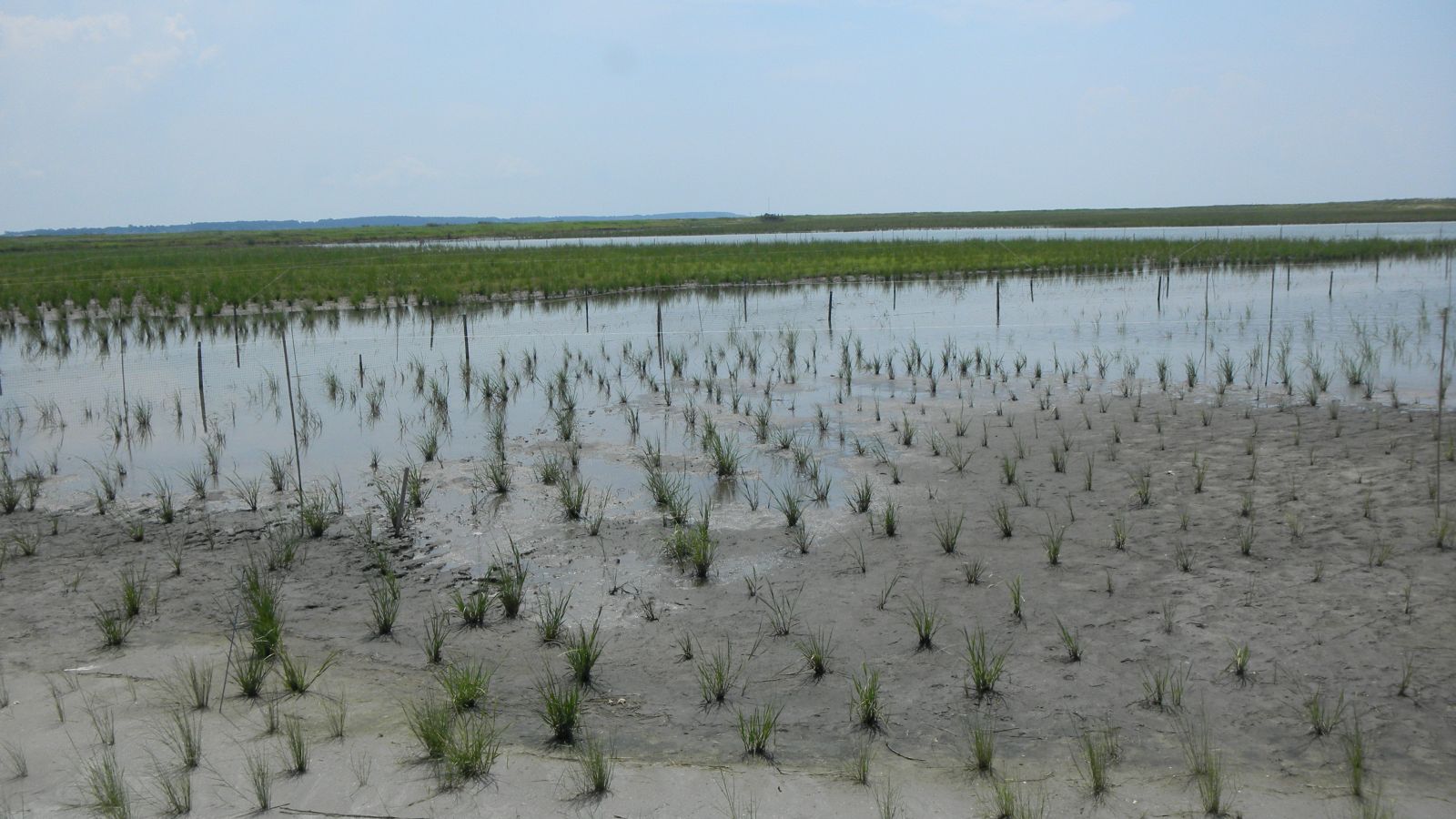 In 1994 the U.S. Army Corps of Engineers, Maryland Department of Transportation, Maryland Port Administration and other state and federal environmental agencies approved returning Poplar Island to 1,140 acres through beneficial use of dredged materials. The sediment entered through a series of dykes, which held the sediment in place. Divided into cells, the sediment was shaped and planted to create marshy knolls or mudflats. Far from just a place to dump dredged material, Poplar Island became a model for restoring wildlife. It has wetlands, uplands, bird-nesting areas, open-water ponds, high marsh and low marsh. For birds and fish, it may as well be paradise.

Poplar’s dredged material comes from the 50-foot deep approaches to Baltimore Harbor. It’s considered clean, especially compared to the harbor sediment — though Maryland Sea Grant research about a decade ago revealed that the harbor sediment were cleaner than previously believed because of frequent dredging. Sediment from the harbor goes to containment facilities near Baltimore.

Hart-Miller Island, near Sparrows Point in Baltimore County, became the first sediment island turned birding paradise in the state. It no longer accepts dredged material and has been designated a state park where visitors can camp, bike, and hike among its wildlife.

Hart-Miller doesn't yet have transportation to ferry eager visitors around; park rangers hope it is coming soon. But Poplar does, and the ride from Tilghman takes about 20 minutes and is free to the public. Upon arrival, members of the bird tour disembark from the boat and board a bus. At our first stop everyone gets off, raises their binoculars or peers through their scopes to search for unusual birds among the hundreds of double-breasted cormorants and sea gulls. The north end of Poplar Island contains high marsh and low marsh. Vegetation is smooth cordgrass and salt hay. We look for egrets, herons, and the plovers or sandpipers that may have slipped in.

“Has any one seen a tri-colored heron yet?”

“Come see the black-bellied plover I have in my scope!”

The birders are a friendly, sharing, and proud bunch. They talk precisely about the crown of a bird’s head or the spotting on its underbelly. We all want to be the first to spot the rare bird that no one else can identify.

After touring the northern marshes, we swing to the southern end. Here the cells are exposed sand or mudflats, which creates suitable habitat for a different set of birds: black-necked stilts, killdeer, a ruddy turnstone, and hundreds of small sandpipers. The birds need this habitat because it is disappearing throughout the Delmarva from development or erosion.

Erosion is still a major threat for some marshes and coastal areas. Sea level rise puts the majority of marshes at risk of inundation. Can dredged sediment give marshes the boost they need?

One measure of success for this beneficial sediment project is the number of wildlife species that have used Poplar Island as a sanctuary. In 2017, Maryland Environmental Service identified 224 bird species, 34 of which nested on the island (including the only successful nesting common tern colony in Maryland’s portion of the Bay). Additionally Poplar Island has developed a significant diamondback terrapin population with over 181 terrapin nests so far and around 800 hatchlings, all of which are recorded and monitored.

The Army Corps and its partners see the potential win-win of removing unwanted sediment and restoring habitats. They just need to become really good matchmakers. Virginia, for example, is funding research on site selection and legal implications, such as permitting and ownership rights, for sediment use. Poplar Island in 2007 was approved for another 776 acres of tidal wetlands and 829 acres of upland habitat, which will contain 68 million cubic yards of sediment. Meanwhile, other countries, including France and England, are looking to us for potential solutions to their dredging issues.

Decades ago, communities fought sediment projects; the Hart-Miller battle went all the way to the United States Supreme Court. But those who opposed it came around; far from being an eyesore, the island is an amenity. Every weekend, pleasure boaters surround it, and the state is considering providing better access because there’s so much demand. (Currently, you need your own boat to get there.) The Corps also wanted to use James Island and Barren Island in Dorchester County for sediment dredged from the channels in the Chesapeake. Taylors Island residents endorsed that idea; protecting James would help protect their shorelines. But the money for those projects has not been approved yet.

Back at the birding tour, the number of new birds added to the list starts to slow, the day becomes hotter and the air conditioning on the bus becomes more appealing. The Terrapin is departing at 1 p.m. (we’ve been squinting at birds for 3½ hours). Poplar Island offers these tours free of charge along with tours and field trips to learn about the site’s history and restoration efforts. As we drive back to the boat, the birders suddenly erupt into a collective cheer: We’ve spotted the tri-colored heron.

Top photograph: Birders line up on the southern edge of Poplar Island is scout for bird species. Credit: Taryn Sudol