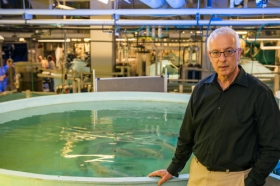 For Yonathan Zohar, the path to a blue revolution is not only near the sea. It’s in northern Wisconsin, where Superior Fresh and researchers with the University of Wisconsin-Stevens Point raise salmon in a land-based, snow-covered greenhouse far from the ocean. It winds its way through Maine, where some companies established a foothold raising the fish in floating net pens, and now others are looking to expand indoors to land-based practices. It even reaches one of only two counties that do not touch the Chesapeake Bay on Maryland’s Eastern Shore—Caroline—where a team plans to invest more than $200 million in building an 80-acre salmon farm at a former chicken processing facility.

It has taken decades, but Zohar believes land-based aquaculture is finally looking like a viable solution to feed the world sustainably. Demand for Atlantic salmon (Salmo salar) is increasing, wild stocks are diminishing, and environmental difficulties are mounting with fish raised in net pens. Zohar, a marine biologist at the Institute of Marine Biotechnology (IMET) in Baltimore who chairs the department of marine biotechnology at the University of Maryland-Baltimore County (UMBC), has been at the forefront of the movement to breed fish, raise them in captivity, and help commercialize the technology for others to do the same.

“I’ve been in aquaculture for 40 years,” he said, “and we are finally seeing something that is much more environmentally responsible.” 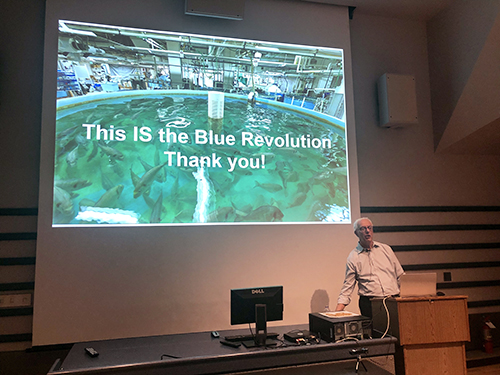 Last month, the National Sea Grant office announced that a consortium led by UMBC and Maryland Sea Grant received a $1.2 million grant to study how to grow Atlantic salmon in land-based aquaculture systems. It is part of a major effort at the National Oceanic and Atmospheric Administration to increase domestic aquaculture production and reduce the trade deficit associated with salmon imports. Recent analysis has shown that around 65 percent of all seafood consumed in the United States is imported. Only about half of that comes from aquaculture, which puts pressure on wild stocks. Those imports add to a growing trade deficit of edible seafood products, which was measured at $16.8 billion in 2018.

Zohar will lead the effort, which seeks to establish a coordinated network of recirculating aquaculture systems raising Atlantic salmon in land-based systems that reuse the water to grow fish. That effort allows for fish production in more affordable areas closer to population centers, which will lower the cost of production as well as the carbon footprint for transport. Zohar has been working with UMBC-IMET colleagues Kevin Sowers and Keiko Saito on technology to turn waste from fish into bioenergy that can significantly offset the production cost of the fish farms through heating the water or other uses. He’s also been working with Allen Place on feeding the fish an algae-based diet so that they don’t have to eat fish meal, which often comes either from grains or wild stocks of fish.

Other partners in the grant include the University of Maryland Center for Environmental Science, Morgan State University, the USDA National Cold Water Marine Aquaculture Center in Maine, and the Conservation Fund’s Freshwater Institute in West Virginia. Industry partners include Superior Fresh in Wisconsin and Whole Oceans in Maine, among others. Wisconsin Sea Grant and Maine Sea Grant are also part of the effort.

“This is a really major award for the aquaculture industry in the United States,” said IMET director Russell Hill. He called the Israeli-born Zohar “a world leader in aquaculture, and we’re fortunate to have him here in Maryland.”

Zohar said the grant “offers an opportunity for domestic production of Atlantic salmon to replace all of these imports. The only way to really scale that up is with land-based systems that are environmentally sustainable. The award allows us to identify the bottlenecks, address the issues, and develop a strategic plan to make sure this emerging Atlantic salmon aquaculture industry can be successful.”

Americans consume 500,000 tons of Atlantic salmon annually, 95 percent of which is imported, and valued at $3.4 billion, according to Zohar. Many customers would like to buy something raised closer to home—if only they could find it at a decent price, according to Steve Vilnit, vice president of marketing at Capital Seaboard, one of the largest seafood distributors on the East Coast.

“We’ve talked to customers and there is a lot of excitement for Atlantic salmon to be raised domestically again,” he said. “The carbon footprint to get salmon from other countries is pretty high. To have something local where we could get the product from the farm to the table within a day would be fantastic.”

Some of the barriers to what Zohar calls the “blue revolution in seafood production” have dissolved. At a lecture soon after the grant announcement, Zohar showed about 100 guests photographs of himself and his graduate students electrofishing striped bass in local tributaries 25 years ago. They were collecting egg-bearing fish so they could provide eggs and juveniles to begin an aquaculture industry. But that was not a reliable way to create an industry. The wild egg supply was very seasonal and striped bass were not always there, he explained. The scientists needed to spawn them in captivity, so they spent many years identifying a hormone that jump-starts the reproductive system. This hormone has since been used to induce reliable spawning in striped bass and many other commercially important fish species held in captivity.

Other barriers to aquaculture remain. Marvesta, a company that raised shrimp for a decade in Hurlock, closed its Maryland operation a few years ago because it couldn’t boost production enough to sustain profits. One of its founders, Guy Furman, now runs a Chicago business importing mussels.

“There’s been a ton of aquaculture failures,” Furman told Chesapeake Quarterly last year. “Getting it from research into commercialization, that’s the hard part, and there’s just no money for that.”

Patrick Hudson, who is part of a team who runs an oyster farm in Southern Maryland as well as several restaurants, encountered some hurdles when he tried to grow tilapia, a popular, mild-flavored fish. However, Hudson and his partners could not figure out how to warm the water economically, so they put the business aside to focus on oysters, which use the natural brackish waters of a local creek and don’t require such an energy investment.

Hudson said he hopes the research grant will help other entrepreneurs solve those problems.

“We could get back into it if we had some support in the execution,” he said. “It’s obviously the only way that people are going to be eating fish in the future.”

Erik Heim, president of Nordic Aquafarms in Maine, agrees the research is critical. “There’s a learning curve in this industry. This kind of research can disseminate knowledge and lower the entry barriers for new players as well as help established players grow.”