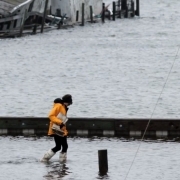 Maryland residents should plan for the state’s coastal waters to rise by 2.1 feet by the year 2050 and by 3.7 feet or more by the century’s end, according to a new analysis by scientific experts prepared for Gov. Martin O’Malley. The panel reviewed recent evidence about sea level rise in Maryland and globally.

The new estimates of sea level rise in Maryland offer a scientific basis for officials, businesses, and residents around the state to plan and prepare for rising waters in the Chesapeake Bay and along Maryland’s ocean coast. The new report does not recommend particular responses, but state officials may use these findings for planning future public structures like roads, bridges, and buildings.

Sea level rise poses a significant risk in Maryland because many homes, commercial buildings, and port facilities sit along the shoreline of the Chesapeake Bay in areas that are especially vulnerable to flooding. Maryland’s Eastern Shore is home to low-lying towns, farms, and marshes. Any rise in sea level would be amplified during storms, exposing those areas to increased risk of flood damage.

That risk is especially significant in Maryland and the Mid-Atlantic region because sea level here has risen three times faster than the worldwide average increase during the past two decades, the scientific panel said in a report released today. The increase is especially rapid because natural forces in the Mid-Atlantic region are magnifying the effect of a worldwide increase in sea level. These factors include the gradual sinking of Maryland’s coastal plain and, scientists suspect, the recent slowing of the offshore Gulf Stream.

The estimate of sea level rise was released by the Scientific and Technical Working Group of the Maryland Commission on Climate Change in a report, "Updating Maryland’s Sea Level Rise Projections." The group was chaired by Donald F. Boesch, president of the University of Maryland Center for Environmental Science.

Gov. O’Malley asked the working group in December 2012 for a fresh projection because scientists have refined their understanding about the topic since 2008, when the same panel (with a different membership) last issued a report about sea level rise. The new findings are based on measurements and computer models of global climate change that are more detailed and precise than the tools available when the 2008 report was written. Scientists have also completed new analyses of sea level rise along the Mid-Atlantic coast.

For the latest report, the governor asked the working group to present a forecast that would be practical and actionable. In response, the working group based its new recommendations on projections in 2012 by the National Research Council (NRC) of the average increase in global sea level and its effects on the coasts of California, Oregon, and Washington state. The NRC’s projections extrapolated from a variety of existing environmental data.

The Maryland group relied on those projections because they are recent and use a widely accepted and potentially useful methodology. The projections describe a range of possible increases from low to high, and within that range, the most likely span of increases.

The working group increased the figures in the NRC projections to reflect Maryland-specific factors, including sinking land, that are expected to increase sea level here by more than the global average.

Here are more of the group’s reasoning and major conclusions about how much sea level in Maryland is likely to increase and why:

The projection for 2050: The report calls it "prudent" for Maryland decision makers to plan for sea level rise of 2.1 feet by 2050. That estimate is at the high end of the working group’s projected range (0.9 to 2.1 feet); it is "very unlikely" that the increase would be greater.

The projections for 2100 and making choices: The forecast of a 3.7-foot increase by 2100 represents the working group’s best estimate; it is in the middle of the projected range (2.1 to 5.7 feet.) A separate analysis has found that an increase of 3.7 feet could inundate large parts of Baltimore’s Inner Harbor.

The working group’s report leaves it up to decision makers to decide how much risk to tolerate when planning construction projects in areas that might be flooded by rising sea level. "[That] depends both on the longevity of the investments at risk and the acceptance of risk," the report says. For public structures not intended to last beyond 2100, "or which could tolerate very occasional inundation," planning for an increase of 3.7 feet might suffice. But if a structure must be useful into the 22nd century, or plays a critical role that flooding might disrupt (like a hospital), designers might want to plan for the high-end estimate of 5.7 feet.

The minimum likely increase: "There is no justification based on current scientific understanding" that average global sea level will rise by less than 1.6 feet by 2100, the report says.

The effect of storm surge: The working group pointed out that flooding from a storm surge could rise above those levels, and decision makers should consider this when planning structures built in low-lying areas. The size of possible future storm surges in Maryland has not been estimated for the Chesapeake Bay but deserves study, the report says.

Greenhouse-gas emissions and the difficulty of projecting to 2100: All projections of sea level rise and climate change are based on a set of assumptions, and the working group’s report acknowledges that some of theirs involve uncertainties -- two big factors that could affect how much the sea rises by 2100 are difficult to predict with precision. One is the rate of increase of greenhouse gas emissions, like carbon dioxide, that are contributing to the warming of the earth’s temperatures. This warming in turn causes the water in the world’s oceans to expand, a process called "steric" expansion. The increase in volume is one of the primary causes of sea level rise worldwide.

The uncertainty about melting ice: A second big question mark about the working group’s projection is the rate at which polar continental ice sheets in Greenland and Antarctica are melting due to warming global temperatures. The melting adds water to the oceans and so further raises sea level. Scientists are working to improve forecasts of melting rates, but the range of estimates remains broad because the observed responses of the ice sheets to increasing temperatures are complex.

Revisiting the projections: The working group encouraged Maryland decision makers to continue to revisit the sea level projections as new information emerges about the rates of greenhouse-gas emissions and land-ice melting. The report offers the sobering thought that the levels of emissions during the next 30 years will largely determine the magnitude of sea level rise for centuries. That means that any reductions in emissions after 2043 may come too late to slow significantly the subsequent increase of sea level.

Consistency with other projections: The working group’s projections for sea level rise in Maryland are within the ranges of global sea-level rise estimated by two other recent national studies completed since 2011. One was by the National Climate Assessment, the other by the U.S. Army Corps of Engineers.

A slowing Gulf Stream: The working group described several other factors that explain why Maryland can expect its coastal sea level to rise by more than the global average. One is a slowing in the flow of the Gulf Stream current, which travels north from Florida along the East Coast and then east across the Atlantic Ocean. Scientists have collected evidence that indicates a decline in the current’s speed since 2004. Because of how water moves in the Gulf Stream, scientists say a decline in speed could generate sea level rise along the Mid-Atlantic coast, including in Maryland. The working group projected that sea level at Washington, D.C., could increase by nearly 7 inches by 2100 for this reason alone.

The region of the Mid-Atlantic coast where above-average rates of sea level rise have been observed stretches from Cape Hatteras, North Carolina, to north of Boston.

Land movement in Maryland: The report also examines the land sinking or "subsidence" that is intensifying the effect of sea level rise here. During the last ice age, the Wisconsin glacier stopped north of Maryland, weighing down land areas underneath it, and pushing up land to the south, land that now includes Maryland's coastal plain areas. With the retreat of the glaciers, the northern lands began to rebound upwards, but land to the south, including much of Maryland, began to subside, sinking downwards like the opposite end of a seesaw. This downward movement is difficult to measure consistently. But the latest estimates for Maryland, used by the working group, put it at 1.5 millimeters per year.

Watch the video above produced by Maryland Sea Grant that explores further the reasons for sea level rise in Maryland and describes the conclusions of the working group’s report. Download a pdf of the report here.

Maryland Sea Grant is administered by the University of Maryland Center for Environmental Science.