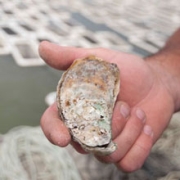 Ocean acidification could pose big risks to oysters, clams, and other organisms that live in the Chesapeake Bay. But scientists still don't know enough about how this global phenomenon will affect life in the estuary. Those are some of the major conclusions of a recent report on ocean acidification by a task force established by the state of Maryland.

The report, released in early 2015, was called for by the Maryland General Assembly through legislation enacted in 2014. Task force members included scientists, lawmakers, and representatives from the commercial fishing and aquaculture industries. Among other things, the team reported that scientists should step up their efforts to monitor changes in acidity levels in the Bay and along Maryland’s Atlantic coastline in the decades ahead.

Ocean acidification is occurring throughout the world’s oceans and is caused by skyrocketing levels of carbon dioxide in the atmosphere. This excess gas mixes into surface waters, causing acidity levels in the water to climb. These shifts have been tied to a recent surge in oyster die-offs in aquaculture farms along the Washington State coast.  Young oysters run into trouble building their hard, calcium-rich shells in acidic waters.

But the Chesapeake Bay’s ecosystem is different from the coastal waters off the Pacific Northwest, says Eric Schwaab. He's the chief conservation officer for the National Aquarium and headed up the Maryland task force on ocean acidification. He and his colleagues were tasked with poring over existing research on how ocean acidification could impact the Bay specifically. Those impacts include potential threats to the region's own oysters and the economics of the people who harvest them for a living.

That's an important consideration in Maryland where the oyster aquaculture industry has grown considerably in recent years. As of November 2014, the Department of Natural Resources had issued more than 300 active leases for farming oysters in state waters.

"We knew we had the groundwork,” for understanding acidifying conditions in the oceans, Schwaab says. But "we also knew that the estuary system has dynamics and unique challenges that nobody really has a handle on."

The Chesapeake, in other words, is a complicated environment. To start, acidity levels in the Bay can swing up and down even during the course of a single 24-hour period, Schwaab says. That's mostly because of the activity of microorganisms like plankton. These organisms strip carbon dioxide out of the water during daylight hours as they undergo photosynthesis.

At the same time, there are only two stations in the entire Maryland portion of the Bay that measure changes in acidity in an ongoing basis: one on the Rhode River near Edgewater and the other off Solomons Island to the south. With so few sensors out on the water, it's difficult to gauge how much, if at all, the entire Bay has acidified in recent years.

To address these complexities, the task force recommended in its report that state agencies and research scientists do more to track the changes in acidity levels in the Bay. Schwaab says that, given recent budget constraints on the state level, funding new research into ocean acidification will be tricky. But various state agencies and university groups already have programs in place to keep a close eye on conditions in Maryland waters. The Department of Natural Resources, for instance, conducts regular checks of various indicators of water quality at sites up and down the Bay.

Such efforts could be adapted to include measuring acidity levels in the water. That will give scientists a better idea of the extent and pace of acidification in the Bay, Schwaab notes, which could help them to better grasp the threats to oysters and other organisms.

"I don't think there's going to be a huge influx of money," he says. "But there are opportunities to carefully design modifications to monitoring networks."

The task force’s report also points out that scientists know a lot about how acidic conditions affect the survival of oysters and other bivalves. But the prognosis for some important organisms like crabs and fish is less clear. Schwaab and his colleagues urged researchers to explore how rising acidity levels might hinder the growth of young crustaceans, striped bass, and other animals that Marylanders like to catch and eat.

To learn more about ocean acidification, read "Acid Test for the Great Shellfish Bay," an issue of Chesapeake Quarterly magazine. The magazine was mentioned in documentation filed in support of the legislation that established the Maryland ocean acidification task force.