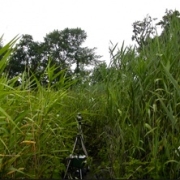 The tall and fluffy marsh plant called Phragmites australis, or the common reed, has a bad rep in the Chesapeake Bay. It’s an invasive species that many have called an unsightly symbol of environmental change. Now, new research indicates that increased carbon dioxide levels in the atmosphere may give these plants an even greater edge. But, though it’s hard to root for an invasive, there may be an upside, too -- these fast-growing European plants could help to protect native marsh species from the hazards of climate change.

This water-loving plant grows all over the world. But different strains of Phragmites don’t all behave the same. That became obvious when a strain from Europe was brought to the United States, likely in the 1800s, and began to creep into wetlands that were dominated by the American strain. Ever since, these native plants, including populations on the Delmarva Peninsula, have been on the run.

But Patrick Megonigal and Thomas Mozdzer at the Smithsonian Environmental Research Center (SERC) in Edgewater, Maryland wanted to know if that invasion could get worse in a more polluted world. As human emissions climb, the levels of carbon dioxide, a common greenhouse gas, in the atmosphere are expected to rise, too. But just how that could affect the two strains of Phragmites wasn’t clear.

So Megonigal and Mozdzer, who’s currently at Bryn Mawr College in Pennsylvania, did a simple study: they grew Phragmites, both European and American, in specialized chambers. In some of those containers, the scientists cranked up the concentration of the carbon dioxide in the air to levels forecast for the future. The logic is simple: using photosynthesis, plants turn carbon dioxide (CO2) into the sugars they need to grow and survive. The higher the CO2, the more potential there is for a plant to grow.

And sure enough, both strains of Phragmites flourished with more carbon dioxide, growing faster in the tanks that simulated future pollution levels than they did when exposed to present-day carbon dioxide levels. But the European reed did even better than its American cousin in those scenarios, packing on at least twice as much weight. That success likely comes down to one thing, the team suspects: flexibility. The European Phragmites seemed better able to adapt to change. It even grew thicker leaves or altered the structure of its roots based on the amount of nutrients -- carbon and nitrogen, another plant necessity -- they could consume. The researchers reported these results in October in the journal PLoS ONE.

The findings represent a mixed blessing for the Chesapeake Bay marshes in which these plants live. With even faster growth, invasive Phragmites may be even more effective than it is already at outcompeting the native plant for space, continuing the decline of American Phragmites and other local marsh species. But there’s a possible silver lining: because the European reed grows so fast, especially underground in its roots, the plant could provide the region some protection from rising sea levels -- one of the consequences of global climate change. That’s because when the plant dies, its roots will get ground up into the marsh soil, in time building up the shoreline. And since the roots of European Phragmites are such quick growers, the plant is likely to lift marshland even faster, helping to keep local shores above the water line.

This research was funded, in part, by Maryland Sea Grant. The team plans to continue its work with funding from Sea Grant, as well as SERC and the U.S. National Oceanic and Atmospheric Administration.