Wetland Ecology Research: Behind the scenes 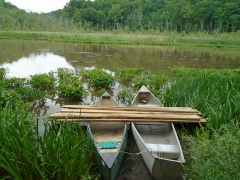 When I first read our project proposal, I remember thinking it sounded straightforward. It neatly laid out a plan to assess the role of native plantings in stabilizing wetlands after an invasive grass, Phragmites australis, was removed. There would be twelve study sites, and we would plant three different native wetland species at each one. We would measure the plants’ growth and various other environmental variables to learn about how the differing site conditions influenced the plants and how the vegetation, in turn, changed the environment.

As it turned out, it took months of preparation before we were even ready to begin planting. We ordered more than 2000 native wetland plants that were grown at an Anne Arundel County nursery and had to be acclimated to the correct salinities in advance in the nursery greenhouse. We also laid out more than 100 wooden boards so that we could take measurements and access our sites without trampling the plants.

P. australis is an invasive grass known to grow rapidly in dense stands up to 12 feet tall, crowding out native wetland species. Land managers have been battling P. australis for decades—mowing it, burning it, and spraying it with pesticides from helicopters—although it is remarkably resistant to attack. It continues to spread widely in wetlands across the United States. To remove the invasive P. australis from our study sites, team members and volunteers had to match the plant’s tenacity.

Since early spring of 2020, we spent long hours chopping it with weed whackers and cutting at it with knives. To prevent P. australis from growing back, we planned to lay down black plastic sheets over our experimental plots. When we learned we could not order sheets of plastic the size of a basketball court, one volunteer came up with an ingenious method of sewing sheets of plastic together using needles that he forged in his basement.

One major challenge of wetland ecology research—which they don’t teach in courses—is the schlepping of all the supplies and equipment. To reach most of our project sites, we hike in with our equipment. To access a few sites, we use canoes. How do you transport delicate plants, 10-ft long boardwalks, and a collection of scientific instruments by canoe? (And this year, all while maintaining social distance and wearing masks!) The answer usually involves a lot of teamwork and patience.

Research involves not only asking questions and thinking up methods to answer them, but actually executing the plan while managing real-life challenges such as budget limitations, rainstorms, and global pandemics. The project comes to fruition only through the creative efforts of all the team members.

I am learning from my mentors to think ahead and assemble a team for fieldwork, to order and organize supplies in advance, to take prolific notes, to develop a defined plan, but also to be prepared to adapt the plan as the project progresses.

Research involves testing new ways of doing things, which guarantees that not everything will go according to plan. Sometimes, the plants in the experiment die. Sometimes soil redox potential measurements have wildly different values on different days. Or sometimes a summer storm deposits an enormous load of sediment that blocks us from canoeing to a site, and we find ourselves wading through a mudflat up to our waists, dragging a canoe of equipment behind us. But all these supposed mishaps lead to new questions and new ideas for research: Why do plantings survive in some areas and not others? Why is there so much variability in the oxidation-reduction potential of the soil? Why does sediment deposit more in some areas than others? There are an infinite number of unanswered questions. Each setback only reveals new mysteries.

I am now analyzing our first season of data, manipulating the numbers into orderly tables and charts with averages and standard deviations. There is little evidence of the effort and muddy boots that went into collecting each data point. Often, only the results of scientific research endure. But it is helpful for me to remember that scientific knowledge rests on a series of tactical challenges, logistical hurdles, teamwork, and unexpected adventures.

Learn more about this student: /fellows/2020/sylvia-jacobson