Turtles, Teaching, and Tales, Oh My! An Afternoon Volunteering at the Smithsonian 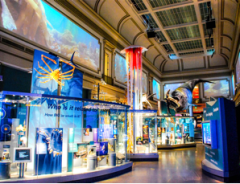 The skies had opened and dumped a record-setting downpour in Washington, D.C. Wouldn’t you know that I was scheduled that day to participate as a volunteer scientist in an event called “Expert Is In” at the Smithsonian National Museum of Natural History.

This program provides an opportunity for scientists to engage with the public through interactive displays and one-on-one conversations. I was invited to speak about the secrets of saving leatherback sea turtles, the topic of my master’s thesis and my current fellowship work. But with the heavy rain that day, I wondered whether anyone would show up. Stepping inside the air-conditioned museum, I felt like a cold turtle crawling out of the water, as my clothing and backpack of display items were quickly drenched during my brief walk from the transit station.

While the heavy rains could have been a deterrent, the museum felt more like a place of refuge for the visitors. Crowds of children and adults flooded in much like the water flowing through the concrete streets outside. Because I was strategically positioned near the entrance to the Sant Ocean Hall, visitors were unable to walk by me without catching a taste of my excitement about leatherback turtles. Hardly a moment went by where someone wasn’t enthusiastically waiting to hear about sea turtles and the threats they face, sometimes sticking around to hear my spiel again.

As many will attest, standing in front of a sign with the word “expert” is imposing. This is especially true standing at my first solo outreach event in a museum as world-renowned as the Smithsonian. I tried to think of any and every possible question I could be asked from children and adults alike. Overall, I was lucky enough to escape the gauntlet of open conversations with few, if any, unanswerable questions. 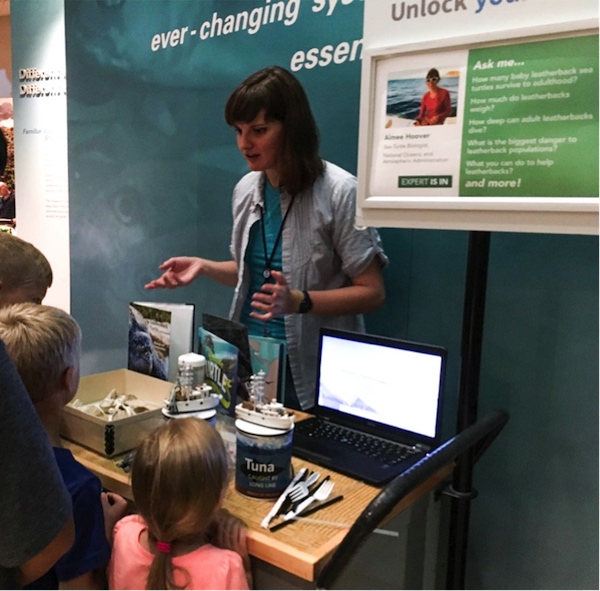 The Sant Ocean Hall provided me a perfect backdrop to discuss the perils faced by sea turtles, including accidental catch in fisheries and consumption of single-use plastics (such as straws and forks). Photo credit: Smithsonian National Museum of Natural History.

Here are a few tips I came away with about how to engage the public’s interest in science in a setting like this:

Pique interest. Prepare basic open-ended questions that begin a conversation with passersby and get them to find solutions to the problems facing sea turtles, e.g., “Can you tell me what dangers a sea turtle might face?” It engages the audience in a museum full of exciting new sights and sounds, and it provides listeners a sense of ownership of the answers, such as the ways they can help sea turtles at home.

Keep it relatable. Share basic facts in a memorable way, using analogies. Like this: “Did you know a leatherback can weigh as much as 150 cats and can be the size of a small car?”

Please touch. Hands-on displays are often more effective than videos because they encourage the audience to approach and start a conversation. The museum provided a sea turtle skull and toy turtles for guests to feel.

But please touch carefully! Demonstrating how to touch a fragile display is key to drawing in shy audience members and preventing the more spirited folks from damaging items. Sea turtle skulls are fragile and hard to come by, and special permits are required to keep them. Handling them requires extra caution.

Explain the “so what?” Tell people from the beginning why they should care about sea turtles and what they can do, no matter where they live, to help solve the turtles' problems. Balloons are often released and fall back to Earth in the ocean where they are eaten by sea turtles; not letting balloons fly away keeps turtles safe and healthy.

Tell them again and again and again. You have already told them the “so what,” and you should reinforce this throughout the conversation. Repeating key points and reiterating these in various ways, such as through questions posed to the audience, drive the point home.

After spending two hours as a volunteer science expert at the Smithsonian, my two-hour shift ended. I was still soaking wet from the rainstorm, but I had spoken to over 150 people. Maybe my handing out free bookmarks after each conversation kept more people listening, but I like to believe it was all about the turtles.

Photo, top left: I spent an afternoon explaining ocean science at Sant Ocean Hall in the Smithsonian National Museum of Natural History as part of the "Expert Is In" program. This is a derivative of "Sant Ocean Hall" by Adam Fagen, used under CC BY NC SA.

Learn more about this student: http://www.mdsg.umd.edu/fellows/2017/aimee-hoover