Submerged Aquatic Vegetation (SAV): From Nuisance Weed to Darling of the Chesapeake Bay 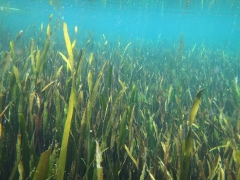 A generation ago, the seagrasses we know as submerged aquatic vegetation (SAV) were unflatteringly referred to as “weeds,” usually in the same sentence as the words “nuisance” and “rid.” We’ve come a long way since then. Googling “submerged aquatic vegetation” turns up a plethora of websites praising conservation ecology efforts to rejuvenate these underwater grasses in the Chesapeake Bay and beyond. Your child might even have planted SAV in biology class!

We began to appreciate the benefits of SAV in the 1970s when scientists realized that it is essential to the Bay’s well-being and that development along coastlines had led to its rapid decline. Bay grasses provide habitat for fish and food for waterfowl, in addition to stabilizing sediments, improving water quality, and removing excess nutrients from the water. Many SAV are considered indicator species because they are so sensitive to man-made disturbances and therefore are good measures of Chesapeake Bay health.

The grasses declined in the 1970s and 1980s because of nutrient and sediment pollution. Ever since, states have worked to clean up the water, and the grasses have had both good and bad times, partly because their growth is also dependent on weather conditions. SAV populations are now growing, spanning around 76,000 acres in the Chesapeake. However, this is only a fraction of their historic population size.

Local residents have a complex relationship with SAV. Many cherish the Bay’s grasses because they view them as habitat to be fiercely protected and restored for the sake of Bay health and because they know that the Chesapeake’s famously delicious seafood requires healthy waters to survive. However, SAV is also becoming a victim of its own success; in areas where restoration goals are being met, the highly abundant grasses clog boat motors and make for an unpleasant swimming experience. Wanting to return SAV to historic levels makes perfect sense ecologically but presents a logistical challenge because much has changed since SAV swathed the Bay many years ago.

Judging from 1960s news articles from the Washington Post and Baltimore Sun archives, the government seemed annoyed with the presence of grasses in the Chesapeake and was experimenting with ways to remove them using chemicals. Several people share a dramatic memory from the late 1960s of the government dropping white pills in the water near the Susquehanna Flats to kill the grasses. That tale was told to me while I was collecting sediment at Rocky Point Park and Beach, north of Baltimore. The storyteller, an older man with a thirst for knowledge of Bay grasses, contentedly watched Dr. Katia Engelhardt (my advisor’s collaborator) and I scoop sediment into plastic buckets for more than 20 minutes while asking questions about our research. It was quite a shock to hear him describe the same memory.

Some Bayside homeowners might sympathize, at least a little bit, with this desire to prune grasses for the sake of recreation. While I was sampling an SAV species called Vallisneria americana (commonly known as wild celery) in shallow waters near Havre de Grace, a curious resident walked out on his dock to learn about what we were up to. Although he was enthusiastic to learn the names of the grasses growing in front of his property, he expressed frustration that grasses had taken over the area. I wouldn’t be surprised if he had toyed with the idea of cropping them back somehow, but in most cases, it is illegal, and for good reason. (If everyone did this, SAV wouldn’t have a chance!)

Sometimes it’s just not easy to live green. While ecologists make discoveries and subsequently laws are (slowly) passed, Bayside homeowners must make day-to-day decisions based on current laws and the going standard of “eco-friendliness.” This can result in bad timing! For example, to protect their waterfront properties from erosion, many well-meaning dwellers have installed barriers such as bulkheads and riprap. But after covering much of the Chesapeake shoreline with these hard materials, homeowners are only now being told that they are detrimental to grasses. Waves tend to rebound off these barriers, leading to turbulence that rips up grasses by their roots. The barriers also cut off land-sea sediment exchange, leading to changes in the sediment composition in the Chesapeake. Sand is essential to creating a viable SAV habitat, and it is sometimes trapped by these hard barriers.

As a Ph.D. student committed to SAV conservation, it would delight me to see SAV continue to expand and be treasured as the coral reef of the Chesapeake. However, it seems that we are coming to a crossroads, the paradox of human development versus preserving nature. How can we help SAV to reach its full potential in the Bay — in the process returning the Chesapeake to its previous degree of cleanliness and bountiful provider of tasty seafood — while “sharing the road” with shorefront homeowners and recreationalists? I think we should focus on creating easy ways for homeowners to ask questions, such as by setting up a live chat that quickly connects them with a knowledgeable guide. This would help homeowners learn about grass-free channels in the Bay through which to navigate by boat without fear of a clogged motor, and could inform them of what permits are available for resolving any “invasion of grasses” around their docks.

Are you a waterfront homeowner with a burning question? The best way to ask (for now) is to click “contact us” on either the Bay Program or DNR website.

Learn more about this student: http://www.mdsg.umd.edu/fellows/2016/carrie-perkins