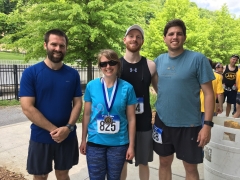 It’s 5:20 a.m. and the alarm is blaring. I get out of bed, drink a glass of water, and lace up my shoes. I open the door and am greeted by the cold, dark morning. I begin slowly jogging, gradually accelerating to a comfortable pace, and continue this simple exercise of placing one foot in front of the other for the next 30 to 60 minutes.

Every time the 5:20 a.m. alarm goes off, I have the same internal debate: get up and run, or press snooze and keep sleeping. The majority of the time, I choose running. Many mornings, especially on the coldest days, I’ll consider why I made the choice to run, both on this specific day, and just running in general. Over my decade of running, the answer to the question of why run, why get out before sunrise, has varied, but now more than ever I run for the mental health benefits.

A recent study showed that graduate students struggle with anxiety and depression at much higher rates than the general population (Evans et al., 2018). While many factors can contribute to anxiety and depression, graduate students in the survey with poor work-life balances experienced more of it. For me, running provides a constant dose of the “life” portion to the work-life balance. After early-morning runs, I find that I’m generally happier and more productive the rest of the day. Additionally, I can be somewhat competitive, and running races provide an outlet for my competitive nature.

Needing some competition, and some additional motivation for early morning runs over the winter, I registered for the Path of the Flood half marathon in Johnstown, PA. This 13.1-mile race combined two of my passions: running and human impacts on the environment. The race approximately follows the path of the 1889 Johnstown Flood, a historic deluge caused by a dam failure following extreme precipitation. During the flood, the Conemaugh River running through downtown Johnstown was flowing at rates equal to the Mississippi River. While the extreme precipitation would have resulted in flooding, the damming of a tributary to the Little Conemaugh River exacerbated the damage.

Over the past winter and spring, I, along with three other Appalachian Lab graduate students, trained for this race. After a few months of consistent training, I was ready. On May 26, we rode a bus from downtown Johnstown up into the hills to the race starting location. Riding over rolling hills, I thought of a comic describing the Ph.D. experience that is analogous to the race and running in general. The comic highlights the joys and despairs throughout the Ph.D. experience. Similar emotions occur during running: there are highs and lows, but ultimately the satisfaction derived from training for and completing the race are worth all of the lows endured in the process. I remind myself of this when experiencing anxiety associated with my Ph.D. program, this is but a low point on the long path towards my degree and, just like in running, the only way to finish is steady forward progress.

The weather was warm and humid but the course was a pleasant mix of roads and trails primarily following the Conemaugh River downstream into Johnstown. While running, it was interesting to think about the floodwaters that likely flowed over portions of the course — it was yet another reminder of the power of nature and our limited ability to engineer tools to control its power.

I finished the race, not quite as fast as I would have liked, but finished nonetheless. Shortly after finishing, while hanging out with my family and friends, any lingering disappointment about my race performance quickly dissipated as the familiar, happy and calm, post-run mood took over. Basking in the sunshine with good company, I was reminded yet again of the benefits of running, and taking time for non-work activities that promote a healthy work-life balance.

Learn more about this student: http://www.mdsg.umd.edu/fellows/2016/joel-bostic