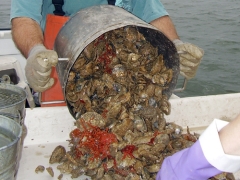 I stumbled into my father’s rubber work boots as I peered out over the Chesapeake Bay in the cold November morning.  His advice echoed through my ears, “If you’re early, you’re on time. If you’re on time, you’re late. If you’re late, you’re …” I’ve always found myself following his adage to a tee, which means I’d arrived at the Deal Island marina an hour before anyone else.

It was my first time going out with Mitchell Tarnowski and his crew with the Maryland Department of Natural Resources during their fall oyster survey. The crew was obtaining information about the oyster’s health and survivability by checking in on more than 250 bars. It was the last boat trip for them, and my purpose was twofold: (1) Learn about their sampling procedures to get a better sense of the information the agency gathered, and; (2) Continue our gathering of water, sediment, and oysters for our analyses of contaminant loads in the Chesapeake and how they might harm oysters – work we are doing at the University of Maryland Baltimore County.

With plenty of time to spare, I pushed my seat back, leaned over, and took a nap. I didn’t mind waking up at 3 a.m. to drive over, but I was a little fatigued nonetheless. I woke up to see cars driving past the lot I was parked in and ventured that I was in an adjacent spot, so I walked over and was greeted by a friendly crew. I quickly drove my car over to the Miss Kay and dropped off my lunch and cooler for holding the samples.

I stumbled on board (I did not have the best dexterity in those rubber boots) and made my way into the cabin. Everyone was tired yet determined to finish off the fall survey. Tarnowski was busy charting out the locations for that day; the remainder would be finished the next. We motored over to the first location and began walking towards the deck.

I tried to quickly follow along the advice of the crew as we waited for Tarnowski to retrieve the oysters in the dredge. A dredge is a clamp-like device attached to a winch on a boat that scrapes along the bottom and picks up a load in its rake-like teeth. The load holds mud, oysters, critters, and whatever else is down there. My job was to help the crew identify and count the number of spat, small, and market-sized oysters. I quickly learned the distinction between small and market-sized; market-sized oysters are at least 3 inches long. The distinction between spat and small was a bit more difficult. Spat are oysters that have settled on a solid surface (usually another oyster shell) and are less than an inch long. Since oysters grow at a rate of about an inch a year, spat are less than a year old.

When a half bushel of oysters were dumped on the table, the crew began classifying the other species on and around the oysters, such as mussels and anemones. After separating the other species, we counted the live and dead oysters. We then measured their shell heights and called out those numbers so they could be recorded. I was amazed by how easily the measurements were called and scribed without skipping a beat. Everybody on board was truly exceptional at their respective duties.

Everyone withdrew to the cabin after the last measurement was scribed. It was my first time on the Miss Kay, so I waited and looked out over the water. I thought back to what placed me right there in that splinter of time; research. I have always been fascinated with exploring something new and have been in a research lab since my freshman year of college, working on projects in the fields of ecology, genetics, and organic chemistry. I realized how fortunate I was to have these opportunities to find something novel, and the future discoveries that lay ahead. Lost in my musings, we soon arrived at another location, and the process began anew.

This process continued throughout the day, with small variations depending on the type of site. At the sites of interest to my lab, I would document the site information, collect my samples, and store them in coolers. We continued counting and collecting samples throughout the day and repeated the same process into midday of the next. In the end, my cooler was full and ready for transport back to UMBC. I was happy to get to know everyone and learn their process firsthand. Everyone onboard was friendly, supportive, and insightful. I was glad that I had the opportunity to learn from them.

Photo, top left: The half bushel subsample is spread on the table to be measured. Credit: Robert Bussell

Learn more about this student: https://mdsg.umd.edu/fellows/2018/ethan-hain