Following the Nitrogen to Find the Septic Tanks 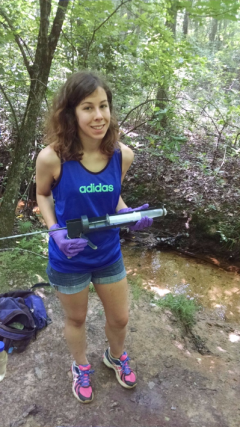 I thought I knew Calvert County well. I had been a 2015 summer intern in Solomons, Maryland, at the Chesapeake Biological Laboratory (CBL) as part of Maryland Sea Grant’s Research Experience for Undergraduates program. My fellow interns and I hiked in Calvert Cliffs, made weekend trips to Chesapeake’s Bounty market for local produce, and repeatedly traveled through the county on the way to and from Horn Point Laboratory on the Eastern Shore. Now, as a master’s student at CBL working on a research project about septic systems, I’ve been exposed to a different side of Calvert County— suburbia.

Too much nitrogen is entering the Chesapeake Bay, decreasing water quality and harming the Bay ecosystem. Nitrogen is a nutrient, so too much nitrogen can cause harmful algal blooms. Algal blooms not only block light from reaching underwater vegetation; algae also die and decompose, a process that removes oxygen from the water, killing and stressing other aquatic life. My research team’s project is investigating the backyard septic systems that store household sewage, one of many sources of nitrogen that flow into the Bay. The purpose of our project, the Septic Tracer Project, is to develop a method to identify if septic wastewater is in streams and what amount of nitrogen in waterways comes from septic wastewater.

To decrease nitrogen input to the Bay and its tributaries, there has been an effort in Maryland in recent years to make sure septic systems are working properly. These include traditional, backyard, underground septic systems in “Critical Areas,” defined by the state as land within 1,000 feet of tidal waters and wetlands, and also some failing traditional systems outside these areas are being replaced with septic systems that use advanced technology—biological processes that can remove nitrogen. As part of the project, we are comparing the two kinds of septic systems to address doubts raised by some members of the public about the effectiveness of nitrogen-removing septic systems.

I knew I wanted to study water contamination in graduate school. For me, this has meant an academic field shift from geology to environmental geochemistry. Coming into graduate school, I had some background in oil spill research from my junior year of undergrad and in studying methyl mercury during my internship at CBL. But most of my research background was on ocean oxygen concentrations around 480 million years ago. It has been a big jump to now study water quality issues affecting Earth’s current ecosystems. Although I do sometimes miss rocks, I love that I am now working on a project so relevant to public and environmental health.

When I moved to Southern Maryland and began research in August 2016, my first task was to finalize the nine stream sites we would sample for our research project. They included three forested sites known to have very little to no influence from septic systems, three sites with predominately traditional septic systems, and three sites with predominately nitrogen-removing systems. While consulting maps provided by environmental planners from Calvert County, I was surprised by the extent of recent neighborhood development in the region and that almost all these new developments use septic systems. Recently constructed housing developments were easily identifiable by clusters of dots on the maps symbolizing nitrogen-removing systems.

We collect water samples from study sites two days each month, returning to the lab each afternoon to process and store the samples. Other than children who explore their neighborhoods, many of the residents of these developments are probably unaware of the small streams flowing through nearby gullies. While all septic stream sites are bordering or at the heart of suburbs, they are surprisingly diverse in terms of the amount of flow and water characteristics. In some places we sample, the stream is only 2 feet wide. After a long period without rain during the summer, I worried we would arrive to find these streams completely dried up. In contrast, our largest, and also muddiest, site is around 13 feet wide. One site’s water has a consistent orange tinge that appears to be from iron-oxidizing bacteria. Other sites are dark brown from plant material, while others are always perfectly clear.

We have completed ten months of our planned year of stream sampling, and as the seasons have changed, the ease of accessing certain sites has varied. I can easily walk to some, but others require me to bushwhack; I have emerged with some scratches, a bit of poison ivy rash, and ticks to pick off. When not collecting water samples, I have processed the water for numerous measurements and worked to develop methods to quantify chemicals that would indicate the presence of human wastewater, namely things in soaps, artificial sweeteners, and medicines. With a full year of collected stream data we will be able to see any seasonal changes in nutrients, different chemical forms of nitrogen, and the influence of septic systems.

We are currently beginning the second part of data collection, getting water directly from residential septic systems instead of just nearby streams. We will try to sample treated septic wastewater as it leaves the tank and enters the system’s drain field, where the water percolates into the ground. Finding a way to do this means selecting specific models of septic systems and hoping the survey diagrams we have are accurate.

Learn more about this student: http://www.mdsg.umd.edu/fellows/2016/katherine-martin