A Deeper Dive into Baltimore Harbor: Scientists take a closer look at the tiny particles living in the murky waters 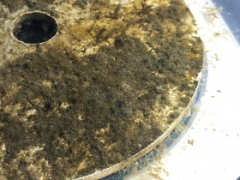 Anyone who’s ever been to Baltimore’s Inner Harbor understands that there is a big trash problem in the city.

It’s not uncommon to see piles and piles of plastic packaging and other debris floating on the brown-colored water. The city has tried to mitigate trash pollution. With help from partners, they have installed charismatic trash collectors known as Mr. Trash Wheel, Captain Trash Wheel, and Professor Trash Wheel. Powered by the sun, these churning collectors altogether remove hundreds of thousands of pounds of trash out of the water. They are considered local icons and have started the long and extremely important process of educating the public and getting the community involved in environmental issues.

Researchers have spent the past few summers looking at Baltimore Harbor’s biodiversity and how small organisms’ capability to colonize surfaces varies through seasons and different water conditions. At the start of every summer, disks made out of metal or plastic are deployed in the water close to the Institute of Marine and Environmental Technology (IMET) and they are pulled up and analyzed every week for changes in biodiversity. The growing organisms form what is known as a biofilm on these disks as they attach and accumulate, and it is thought that the rate of growth of the community may vary as a function of temperature, water quality and even salinity. This year, the question of how the plastic debris is affecting these organisms was brought up and that is when I was invited to work on this project. They knew that bacteria, algae, protozoans, and even some crustaceans were thriving on the surface of the disks, but they still had questions about how and why.

I am a microbial ecologist, and my work usually involves looking at how and where microorganisms grow and interact with each other and other life forms. My current project involves identifying which microbes are capable of growing on very small plastic particles. These particles are known are microplastics, can be up to 5 mm in size and can either come from industrial processes or break down from larger pieces of plastic debris. These particles provide a surface for microorganisms to stick and create a complex growing environment known as a biofilm. I became involved in this project when I was asked: “If you’re able to look at the biofilms on microplastics, you should be able to look at microplastics in biofilms, right?” 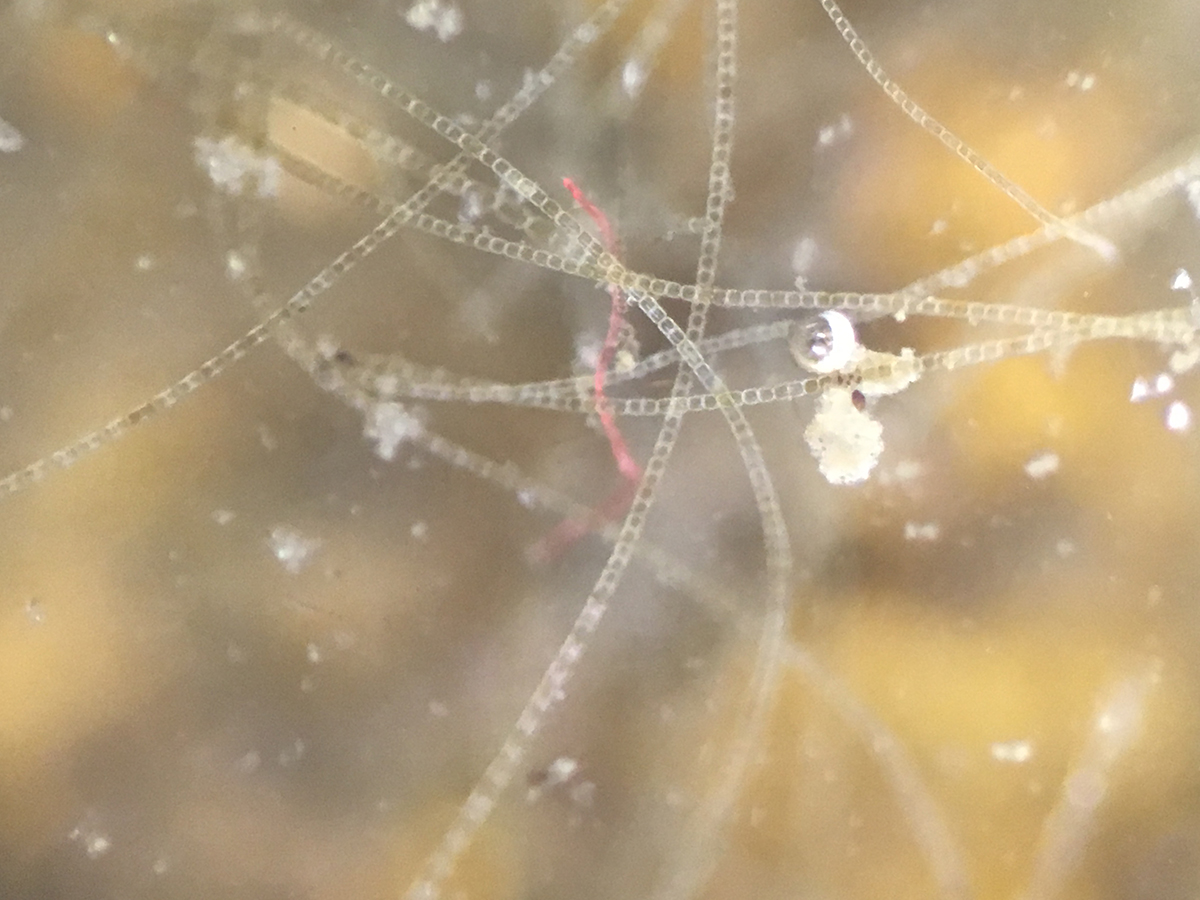 Theoretically, yes. I was immediately captivated by the idea of developing a protocol that would allow us to determine if microplastic particles were floating around in the Bay and interacting with its biodiversity. This project also involved taking this protocol and sharing it with high school science teachers Maryland, who will then implement it in their classrooms to teach their students about biofilms and plastics in the Bay. Even though I grew up in a different country – Mexico –  it’s incredibly easy for me (or anyone) to see how important the Chesapeake Bay is in every aspect to Maryland and how crucial it is to teach its communities how to take care of it.

Four-inch diameter disks made out of aluminum were put out in the Harbor in the month of April. Every few weeks, we took one of those disks and collected the biofilm, mostly bacteria and microalgae, that grew on it. We experimented with different variations of a physical separation protocol based on density that separates organic and living matter from polymers and other human-made materials. In doing so, we were able to find a wide range of polymer particles including microbeads that probably came from cosmetic sources like face wash or toothpaste, and microfibers that usually make their way into the environment from plastic textiles. After trying different versions of the protocol, we finalized and wrote up the experimental procedure that allowed us to process and document the highest amount of microplastics.

Now that the new school year has begun in Maryland, we have shared our findings with high school science teachers and have gotten the opportunity to provide them with the aluminum disks from the Harbor and with instructions on how to best look at the plastic in them and transmit to the students that trash pollution has a big impact on the living organisms in the Bay. Maryland Sea Grant is hosting a workshop to train these teachers on the best way to teach this and I get to talk to them about the work we have been doing.

There are many reasons why this type of outreach is important. Working with science teachers amplifies the impact of the work by every generation of students that they teach. Communicating to young people of all backgrounds that environmental issues are important and that they can make a difference in their community themselves can make a significant change in how they lead their lives and get involved during their whole lives.

Another reason why this work is important is that we are only now starting to understand the extent of the impact microplastics have in our planet and our lives. These particles are ubiquitous in bodies of water worldwide and have been integrated into our food chains and ecosystems. Helping the next generations understand this problem and giving them the tools to reduce and mitigate it will be the key to deciphering the solution to plastic pollution.

To me, the best part of getting to talk to students and teachers about science is showing them that scientists can be and look many different ways. As a woman and a foreign student, I know how important it is to be able to see somebody you can relate to doing research and encouraging all kinds of people to do it too. The long-term impact that this work can have in our city, our state, our country, and our world is invaluable.

Photo, top left: Biofilms disk from the Inner Harbor under the microscope. Courtesy of Ana Sosa

Learn more about this student: https://mdsg.umd.edu/fellows/2018/ana-sosa