After Hours at the National Aquarium 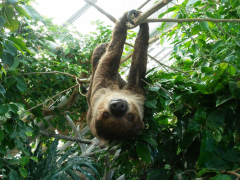 Since moving to Baltimore in 2015, I wanted to be a volunteer at the National Aquarium. At that time, I was a lab technician at Loyola University Maryland who regularly took care of reptiles, rodents, and greenhouse plants, so I thought I would be a shoe-in. Eagerly, I filled out the online volunteer application and waited patiently for an invitation. Weeks, months, and years went by. During that time, I reapplied several times but heard nothing. Finally, in March of this year, I picked up the phone and got to talk to Jeff Walstrum, then the Director of Volunteer Engagement. Although he was about to retire, he gladly took my call and we had a great conversation. He generously put my application through to the rainforest staff on the last day of his career at the National Aquarium. A few weeks later, I began my training as a horticulture volunteer in the Rainforest Exhibit.

As a graduate student at the University of Maryland studying the factors central to the persistence and recovery of the aquatic plant Vallisneria americana, learning to care for a variety of plants — both aquatic and terrestrial, exotic and native to the Chesapeake Bay — is more relevant to my interests and career development than ever. Though I’ve lived in many different places throughout my life — Boston, Switzerland, The Netherlands, Poughkeepsie, and now Baltimore — all my homes have been a stone’s throw from the ocean or, in the case of Basel, Switzerland, from a major river called the Rhine. Paired with my landscape ecology/genetics research on V. americana, volunteering at the National Aquarium satisfies my passion for plants and marine life.

Being a volunteer at the National Aquarium takes you behind the scenes, which is incredibly cool. While watering plants from up in the rafters of the Rainforest Exhibit a few weeks ago, a sloth named Ivy planted herself within two feet of me. She moved so gracefully and slowly, one deliberate movement at a time. With her long, curved claws she gripped netting, poles, and tree branches near the glass ceiling to inch closer and closer to me. When I moved to rafters on the other side of the exhibit, she followed me ever so quietly and so it seemed like she appeared out of nowhere each time I spotted her.

In the peace of the early morning before guests arrive, tiny baby frogs scamper in plain sight; delicate birds of every color hop down to the patio to feed on a vibrant mix of live insects, fruit chopped into small cubes, and pelleted food. The only sounds are misting machines and the songs of tropical birds; the moisture on the air clears the sinuses and relaxes me.

Working behind the scenes has also shown me that every detail of the guest experience is carefully crafted to ensure that guests see animals in their wild state, but not too wild. Because of the staff’s efforts, the exhibit is like a real rainforest in many ways; a fake log hides the hose spigot; a large waterfall is religiously turned on well before opening time; and plant species are carefully selected and positioned to mimic the four layers of a natural rainforest. Highlights of the exhibit include a stilt palm, a banana tree, a cacao tree, colorful bromeliads and orchids growing on tree branches, huge palm trees, and much more.

Yet, in other ways we strive to make the Rainforest a little less wild because guests, who pay around $40 each, expect to have a luxurious, unique experience that sweeps the undesirable aspects of wilderness under the rug. Every morning we hose down all the pathways and the patio floor to wash away bird poop. We throw away dead leaves and trash that guests have left behind. We repeatedly find clothing, chewing gum, and other human items carelessly discarded in the soil and on the ground.

The Golden Lion Tamarins are well fed to keep their appetites for exhibit birds at bay just as in the Blacktip Reef exhibit, sharks swim among tiny fish but do not eat any of their would-be prey because they are fed almost continuously. And yet occasionally, the tamarins catch a mouse — or, shudder to think, an exhibit bird — and devour their prey in front of terrified guests, shattering the meticulously curated facade of stunning wildlife that never kills, dies, or gets dirty.

Walking home at the end of my shift, I’m always acutely aware of the garbage floating in and out against the promenade of the Inner Harbor, just steps away from the pristine National Aquarium. Last week, I was pleased to see the trash being eaten up by a garbage pickup boat. In places like the Aquarium and Inner Harbor, both of which experience high human foot traffic, maybe the best thing we can do is to continually clean up after repeated littering. But how will quietly cleaning up in the early morning change people’s behavior? Does “natural” or “wild” mean leaving things be or carefully managing nature for human comfort and consumption? Are we ever going to get to a point where, instead of cleaning up a mess, we prevent it in the first place? For the sake of the grasses, the animals, and the Chesapeake, I certainly hope so.

Learn more about this student: /fellows/2016/carrie-perkins