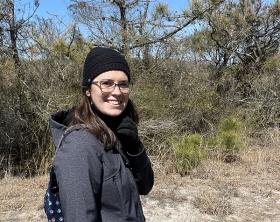 The program is designed to place early-career scientists at the intersection of policy and science, so they can apply what they have learned in the lab and the field to Maryland’s regulations and actions. They will work in high-level offices in Maryland state agencies for one year.

Rachel Lamb, who recently received her PhD in geographical sciences from the University of Maryland, will be working on climate change policy with the leaders at the Maryland Department of the Environment (MDE). Primarily, she will work closely with MDE Assistant Secretary Suzanne Dorsey and the Climate Change Program team within the agency.

Khurshid Jahan defended her dissertation in July for a PhD in geosciences from the University of Rhode Island. A specialist in stormwater and groundwater, Jahan is working with the Maryland Environmental Service, which works with local governments on waste reduction and environmental restoration. All three will be working with the Maryland Climate Change Commission on their agency priorities.

“Maryland Sea Grant is thrilled to partner with state agencies to place these talented researchers at the center of science policy and decision-making in Maryland,” said Maryland Sea Grant Director Fredrika Moser. “We see this as a great way to support Maryland environmental efforts, while offering young scientists the chance to explore a career in science policy."

The program will broaden career options for each fellow, providing key expertise in high-level policy so that each can pursue positions in policy-making with government agencies when their year ends. The goal is more science-based policy at all levels of government. Moser hopes the program will continue and become a regular fellowship at Maryland Sea Grant that will complement the agency’s other offerings, which include Knauss fellowships that embed new graduates into Washington policy positions and research fellowships.

Rachel Lamb said she didn’t know that a person could study the environment as a career until she was a senior in high school. A native of Grand Rapids, Michigan, Lamb graduated with degrees in environmental studies and international relations from Wheaton College in Illinois. While spending several months in Peru with A Rocha International, an organization devoted to community-based conservation projects, Lamb worked on developing a conservation plan that balanced both human and ecosystem needs in the region. This work generated even more interest in the intersection of policy and science, particularly internationally. She moved to Maryland to pursue a dual master’s degree that focused on public policy and sustainable development/conservation biology. Lamb loved her master’s program and was happy in Maryland, but after graduation she wanted to take a little bit of time away from school to determine her best path forward.

“I’m very interdisciplinary and I really appreciate making connections. I knew I really wanted to work on climate change but, I was still trying to figure out what research questions to ask,” she said.

During her hiatus from school, Lamb served as the national organizer of Young Evangelicals for Climate Action. Rather than stoke the debate about whether and why climate change is occurring, the group counters that addressing the warming planet is part of Christian “witness,” and an act of love for those on the frontlines of climate impacts. Lamb, one of the group’s founding members, remains a senior advisor, along with Katherine Hayhoe, an atmospheric scientist who has long argued that evangelical Christians like her family have an obligation to enter the climate debate and push for solutions.

When Lamb did return for her PhD, it was in the Department of Geographical Science. She studied nature-based climate solutions and how to measure, monitor, and incentivize forest carbon sequestration, specifically through reforestation and afforestation, or establishing a forest where there previously was none.

Lamb is excited to learn more about putting these ideas into policy. For example, are there ways we can better protect forests through laws to safeguard the carbon within them? MDE is looking into that, with Lamb’s help. An avid hiker in national parks, she’s also looking forward to learning more about the region’s environment, the Chesapeake Bay, and how the water and land interact. She hopes to work with Maryland Sea Grant Extension (MDE) specialists, including those who specialize in coastal climate and adaptation.

“I love that I am working with MDE but I also really appreciate being a MDSG fellow. I am just looking forward to expanding my knowledge of blue carbon and the estuary itself,” she said. “Even though I’ve lived in Maryland for a long time–9 years–and I know a lot about the Bay, I don’t know it like our Extension officers know it. I am benefitting from learning from them.”

Khurshid Jahan: Stormwater, groundwater, and everything in between

Khurshid Jahan planned to move to the United States from her native Bangladesh to pursue graduate work because she believed that advanced education is one of the indispensable parts of being a good researcher. She earned bachelor’s and master’s degrees in geology and environmental geology at the University of Dhaka, in Bangladesh, and then received a post-graduation degree in water resource development at the Institute of Water and Flood Management at the Bangladesh University of Engineering and Technology through a fellowship with the South Asian Water Alliance. During her 15 days of hands-on training in Sri Lanka as part of the fellowship, Jahan said, she began to see a “bigger view of research formulation and its methodology development in the water sector.”

Despite being a small country, Bangladesh has many water resources, both fresh and saline. Jahan worked for about 6 years in the water resource and management field as a hydrogeologist before starting her PhD program at the University of Rhode Island. Determined and focused, Jahan said that “Human life is full of barriers and obstacles, but the strength of overcoming is much greater than these challenges itself.”

Her research focuses on best management practices for controlling runoff quantity and quality issues in suburban Rhode Island. Jahan looks at reducing pollutants by applying the best management practices to stormwater runoff, which is now a concern for both urban and suburban areas. Suburban growth has increased dramatically in her study area over the past decade. Pollutants like nitrate, orthophosphate, and suspended sediments are also a problem for the suburban areas. However, applying low impact development structures like bioretention, permeable pavement, and vegetative swales can reduce pollutants significantly.

Jahan is working with Maryland Environmental Services and its director, Charles Glass, on refining methodologies to reduce carbon emissions. In addition, she will be focusing on controlling methane gas emissions and increasing incentives for renewable energy. Also, she will work on the carbon offset credit in Maryland.

“The most challenging part of anything is to start, and I have already started my journey,” Jahan said. “This fellowship is a part of that, for which I am grateful, and it will help me along the path to show me the way to reach the next destination.”

Tassew Mekuria has a multidisciplinary background that includes biology, environmental science, and material science. His master’s degree work was in biodegradation accentuating toxic chemicals such as PCBs and DDT, and his doctoral study was in material science specifically on magnetic nanoparticles, carbon nanotubes, and heavy metals. The goal of his research is to help the effort of developing a nanomagnetic sensor for heavy metals such as chromium hexavalent in Baltimore areas drinking water sources. He received both graduate degrees from Morgan State University in Baltimore, a city that has a legacy of chromium, heavy metal, in its water and soil from defunct industrial operations.

Mekuria has studied the biodegradation of toxic and persistent chemicals from the soil. He considers his work developing a nano-magnetic sensor to detect heavy metals in fresh surface water and groundwater sources as one of his most notable accomplishments. He was a member of the Seifu Research Group at Morgan State University, where he had visiting researcher appointments with federal laboratories. They included the National Institute of Standards and Technology, Brookhaven National Laboratory, and the US Army Research Laboratory. Mekuria published papers with those groups as a visiting researcher. He also served as a crime scene investigator for several years in the Baltimore Police Department crime laboratory before his fellowship.

Mekuria was born in Ethiopia and received his bachelor’s degree in biology from Addis Ababa University. He served in Ethiopia as a teacher and school administrator before he came to Maryland 18 years ago to continue his education; he considers it his permanent home now..

Mekuria has several years of teaching experience in biological science from high school to college levels in Maryland. He taught biology for the Baltimore City Public Schools as a substitute teacher and Montgomery County Public Schools as a homeroom teacher before he received his PhD. Since 2011, Mekuria has taught biological science for Baltimore City Community College. He remains there part-time and is planning to include climate change and environmental sustainability in his syllabus. Education has always been a guide for him, and he hoped it would be the same for the city students he teaches.

As a Sea Grant fellow, Mekuria will work closely with the office of Peter Goodwin, president of the University of Maryland Center for Environmental Sciences. He is working on environmental policy issues in support of the Science and Technology Working Group of the Maryland Commission on Climate Change. Mekuria is also assisting the University System of Maryland's Office of the Chancellor on environmental sustainability issues. So far, he said, the job has entailed a lot of Zoom meetings and getting to know colleagues. But like Lamb and Jahan, he has big plans.

“I plan to use this opportunity to deliver what I know, what is inside me as a scientist,” Mekuria said. “Climate change is real and affecting our daily living path and it does not have geographical boundaries. We are going to lose our planet earth through time if we do not act now.”